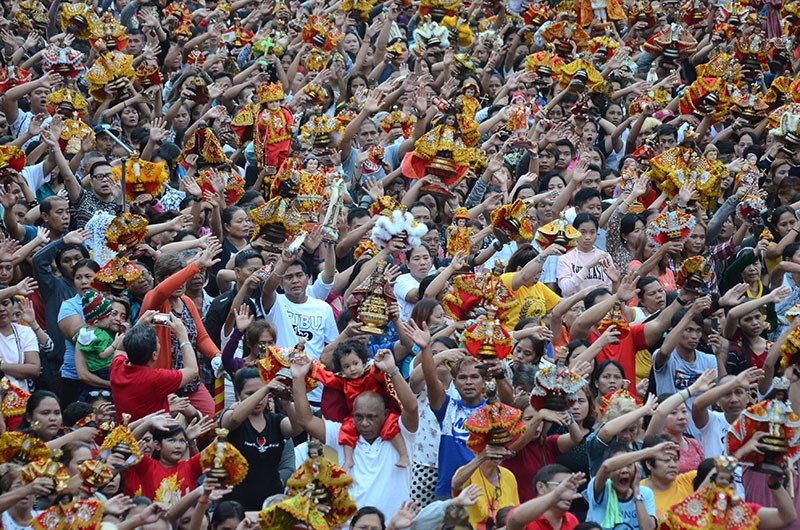 Younger Crowd. Organizers have observed that more young people are participating in the Fiesta Señor activities. The head of the secretariat of this year’s Fiesta celebration, Fr. Ric Anthony Reyes, OSA, says their use of social media has paid off in attracting a younger crowd, although the Basilica hopes the youth would join more non-fiesta activities. (SunStar Photo / Alan Tangcawan)

THE number of devotees and pilgrims attending the nine-day novena masses at the Basilica Minore del Sto. Niño probably exceeds a million people a day, an organizer of this year’s Fiesta Señor said on Wednesday, Jan. 16.

With millions of devotees and pilgrims flocking to the Basilica for the novena masses, improving security has become more challenging for Fiesta organizers.

Fr. Ric Anthony Reyes, OSA, head of the secretariat of this year’s Fiesta celebration, told SunStar Cebu that based on their estimates since he started serving the Basilica in 2016, the number of devotees and pilgrims would reach 15,000 per mass inside the church compound.

The Pilgrim Center and Basilica church only has a 7,000 seating capacity, but thousands of devotees would stand at the open spaces in the Basilica quadrangle, with tens of thousands more gathering outside the compound.

Cebu City Police Office (CCPO) director Senior Supt. Royina Garma made the crowd estimate during an inspection of the church premises and surrounding areas. The crowd reportedly would gather as far as the Cebu City Hall and Cebu Metropolitan Cathedral.

There are nine hourly masses per novenaryo or novena day at the Basilica. But the crowd estimate applies only to regular novena masses and does not include the important masses such as the First Mass, Traslacion Mass, Sinulog Mass and the Pontifical Mass, which draw the most crowds, Reyes said.

Reyes said during the nine-day masses, the church is most jam-packed during the 5 p.m to 7 p.m. masses. They also observed less attendance during the early afternoon masses, especially when the sun is highest, he said.

Since his assignment at the Basilica during the time of former rector Fr. Jonas Mejares, Reyes said he has observed a steady increase of devotees and pilgrims attending the novena masses and religious activities.

Reyes said that in the past, especially during the penitential walk with Jesus, the procession would often involve just one lane of the street.

He admitted, though, that the Basilica has not made a study on the number of devotees participating in the major fiesta activities.

Reyes attributes the increasing number of devotees participating in the Fiesta to religious and cultural factors.

“We notice that people come in droves, especially those who have problems and want to return to the Lord. There are also those who want to participate in the Fiesta’s activities because they see the importance of religion in their lives,” Reyes added.

He also noticed that more young people are participating in the Fiesta activities, and he hopes they would continue doing so. On the other hand, Reyes said the Basilica wants the youth to join more non-fiesta activities.

He said their recent use of social media has paid off as it has attracted a good following and has been recognized nationally.