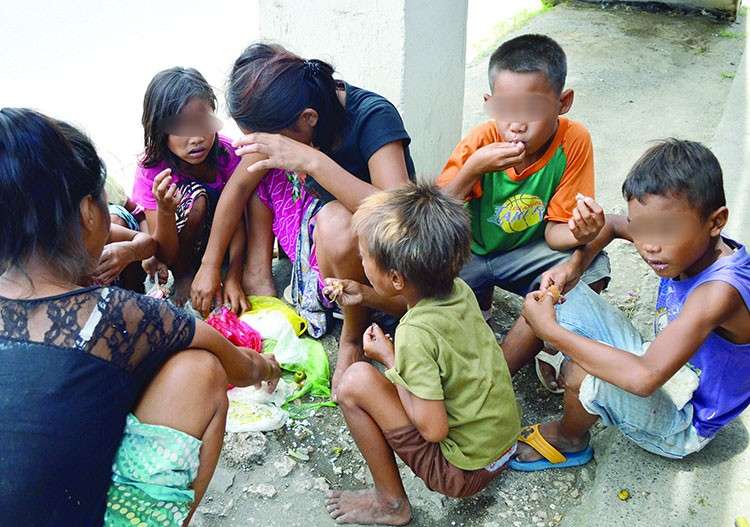 CEBU. Children share a meal near a flyover in Lapu-Lapu City in this image taken during the 2013 election campaign. (SunStar Photo/Alan Tangcawan)

HUNGER level in the Philippines has reached its lowest post in 2018 since 2003, the Social Weather Stations (SWS) revealed in its latest survey.

SWS noted that moderate hunger decreased by 1.7 percentage points, from 10.6 percent in September to 8.9 percent.

Severe hunger also declined to 1.5 percent, down by 1.3 percentage points from September's 2.8 percent.

Moderate and severe hunger levels were at its lowest since June's 8.1 percent and 1.3 percent, respectively.

The SWS said the 2.8-percentage-point decrease in the quarterly hunger rate was due to decreases in the incidence of hunger from both poor and non-poor families.

Hunger level among non-poor families also decreased in the September to December 2018 period, from 7.6 percent to 6.1 percent.

In a statement, Presidential Spokesperson Salvador Panelo said the Palace was pleased that the hunger incidence last year was "the lowest figure recorded in 15 years."

Panelo said the improvement in Filipinos' economic status was among the "paramount reasons" why President Rodrigo Duterte "continues to win [their] trust and approval."

"The President’s sincere endeavors, whether in taming inflation or running the bureaucracy, have started to bear fruits," the Palace official said.

"The best is yet to come, as the Chief Executive continues to work double time in the remainder of his term to uplift more Filipino families out of poverty and hunger, towards a more comfortable and prosperous life for all," he added.

Some 1,440 adults Filipinos were interviewed by the SWS, using sampling error margins of ±2.6 percentage points for national percentages, and ±5 percentage points each for Balance Luzon, Metro Manila, Visayas, and Mindanao. (SunStar Philippines)