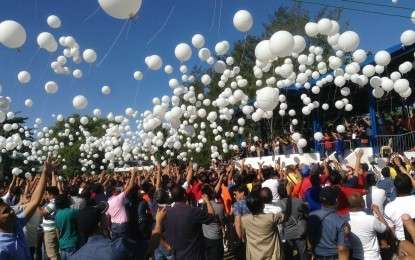 PANGASINAN. Election candidates in Pangasinan for the May 2019 elections release white balloons to signify genuine intention to serve. (Photo by Liwayway Yparraguirre)

“Most of the town and cities are under category 1 or areas of concern while two from La Union, specifically Sudipen and Balaoan, are placed in category 3 or areas of grave concern because of the recent incidents involving electoral candidates,” she said in an interview on Wednesday, January 16.

Peralta said 11 from Ilocos Sur and Ilocos Norte are categorized as areas of immediate concern, or under category 2, due to intense political rivalry during previous and this year’s elections.

Although the Regional Mobile Force Battalion is sufficient in number to secure the elections in the entire region, Peralta said augmentation forces from the other regions will be welcomed by PRO-Ilocos.

“We are very much open for additional troops as we would like the elections in the region to be safe and secured,” she said.

Meanwhile, the police officer advised the residents in the region to expect intensified checkpoints and other police operations since the start of election period on Jan. 13, especially in Sudipen and Balaoan in La Union.

She also urged the citizens to be vigilant and report any untoward or unlikely incidents in their areas.

“As of now, it is generally peaceful in the region. We hope this would be maintained all throughout the election period until June 12, or even after the elections,” Peralta said.

Chief Superintendent Romulo Sapitula, PRO-Ilocos director, stressed they are aiming for zero-casualty during the duration of the election period. (PNA)