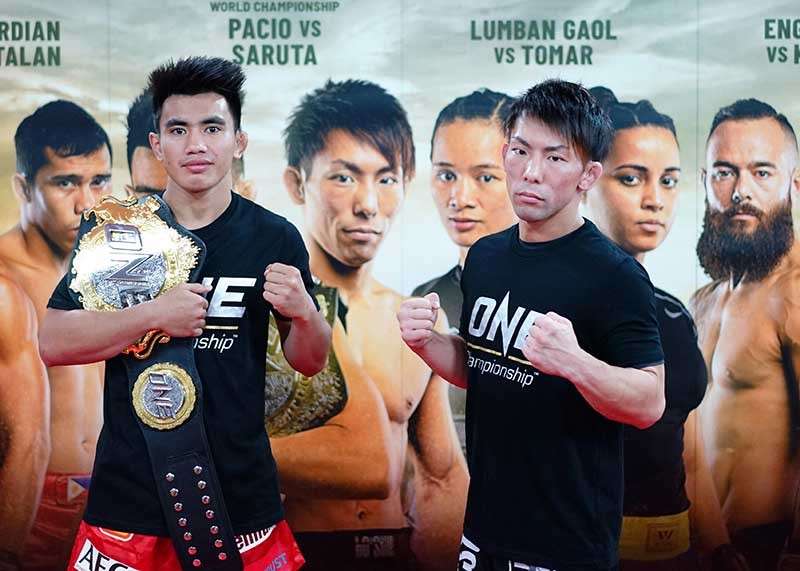 Reigning ONE Championship strawweight king Joshua Pacio and challenger Yosuke Saruta in their face-off for the main even of “Eternal Glory” in Jakarta, Indonesia Saturday, January 19, 2019. (ONE photo)

A FIRED up Joshua Pacio will mean business when he enters the cage tonight against an equally dangerous MMA fighter.

Pacio will defend his ONE Championship strawweight world title against a highly dangerous Yosuke Saruta in the main event of “Eternal Glory” set at Jakarta, Indonesia where he will kick off the team’s series of title defense this year.

“I feel I am at my best right now. After a tremendous training camp, I’m ready to step up to the plate and defend my title. This World Title means everything to me. It represents all the hard work that me and my team have put in,” said Pacio.

Pacio won the title against Yoshitaka Naito in their rematch via unanimous decision in September last year to cap 2018 with a perfect 3 – 0 record, submitting two of his opponent in the process.

“It’s time to reap the fruits of our labor. Coach Mark [Sangiao] has come up with a great game plan for me and I will do my best to execute it. Yosuke [Saruta] is a very dangerous opponent and I am not taking him lightly. I have prepared for the toughest challenge of my career, and I plan to showcase the best version of Joshua Pacio in the fight,” added Pacio.

While Saruta may be the underdog, the Japanese challenger will be one of Pacio’s toughest test with his striking and ground game.

The 31–year–old Shootoo world champion earned the title shot after defeating former ONE strawweight titlist Alex Silva in his ONE debut last December.

“When I made my debut a few months ago, I wanted to make a statement. I wanted to prove to the world that I am ready for a title shot immediately. That is what I have done and now we are here. I am confident that at the end of the night, I will leave the arena with my hands raised in victory and with the World Title around my waist,” Saruta said.

Saruta added Pacio is a great champion but he feels he have the tools necessary to defeat the reigning strawweight king.

“It’s going to be an interesting matchup. I vow to give my best performance,” he added.

Also in the fight card is fellow Team Lakay Edward Kelly who will face off against Singapore’s Christian Lee in another highly anticipated rematch.