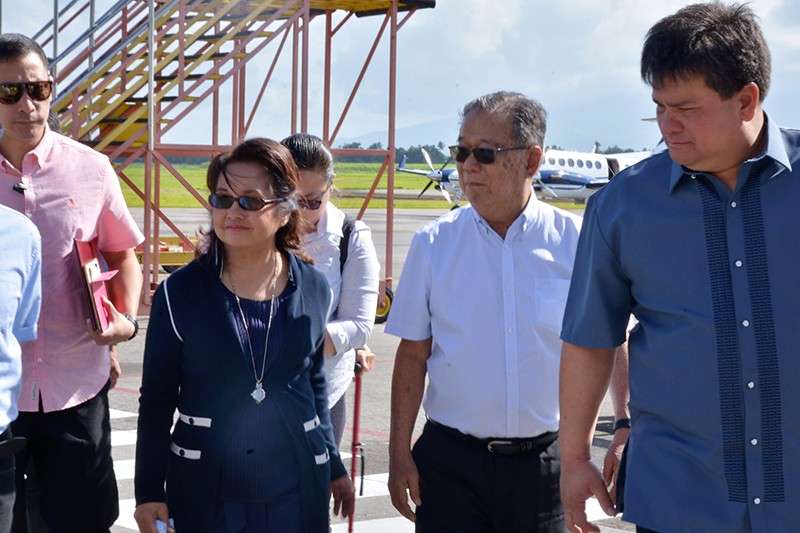 She also graced the 11th anniversary of the Bacolod-Silay Airport which was built during her presidency. It was realized with the financial support from the Japan International Cooperation Agency.

Since she will be ending her term on June 30, she said she has to go around and see the projects that she realized during her presidency. She also wanted to see if there is an oversight that she can still work on in the remaining months of her public life.

She recalled that the transfer of the airport from Bacolod City to Silay City was never easy because of the many resistance from various sectors who were already used to the old location of the airport.

But they exercised political will to build the new airport outside Bacolod, the capital city of the province.

“It was in 2003 that the new airport was built in Silay City and open it in 2007. It brought in a floodgate of tourists and investors. So now, it becomes too small,” said Governor Alfredo Marañon Jr., but Civil Aviation Authority of the Philippines (CAAP) is expanding it.

Arroyo was informed by CAAP officials that the expansion of the airport facility has an allocation of P108 million for 2019 and P114 million for 2020.

The airport is about 300 hectares, but only 180 hectares were utilized.

The airport is classified as a regional airport which is considered as an international airport.

What needs to be done is to market the destination to international airlines, Arroyo said.

“We built it to be an international airport and we call it a regional airport,” she said.

The Bacolod-Silay Airport Access Road (BSAAR), which was also her project, is now being used as a fast and convenient way of going to and from the airport.

The CAAP also informed Arroyo that the existing airport of international standard is equipped with advanced technology that helps ensure a safe and convenient ride for all its passengers.

The former president made a run through to her major infrastructure projects from the Bacolod-Silay Airport to the airport access road, where the Department of Public Works and Highways (DPWH) presented to her the additional road networks connecting BSAAR in Silay up to Manapla town.

The House Speaker and her entourage also traveled to Panay through the roll-on, roll-off vessel which is also part of her nautical highway project.

She also mentioned the possible improvement of the Banago seaport in Bacolod City, the first seaport to have served Bacolodnons and Negrenses for a long period.

“Because now that Congress has already finished all of the Sona (State of the Nation Address) legislation of President Rodrigo Duterte for the next six months, we are now concentrating on oversight...And I told the port manager of Bacolod, maybe we can tackle the Banago port, an old port that we inherited. We did not build it from scratch. I am glad that President Duterte's administration is modernizing the western nautical highway where Banago port is part of it. I guess, it will be relevant to the oversight briefing if we will be asked about it,” she said.

Arroyo believes that Duterte is doing a great job. “He got very important achievements. His reforms are very meaningful. His engagement with China is very fruitful so now we should really reap the harvest from the reforms and policy initiatives that he has made.”

As to the treatment of the President to the Catholic Church, she said each one has its own style.

“The important thing is that he initiated a lot of reforms, a lot of engagements that are very meaningful and we should reap the harvest from that and implementation will be the key,” she said.

On Bacolod City Councilor Ricardo Tan’s alleged drug links, Arroyo said: “I do not want to be a peanut gallery to President Duterte in terms of governance and especially when it comes to drugs. He knows much more than anybody else. In fact, when I was President, he was my adviser on drugs.”