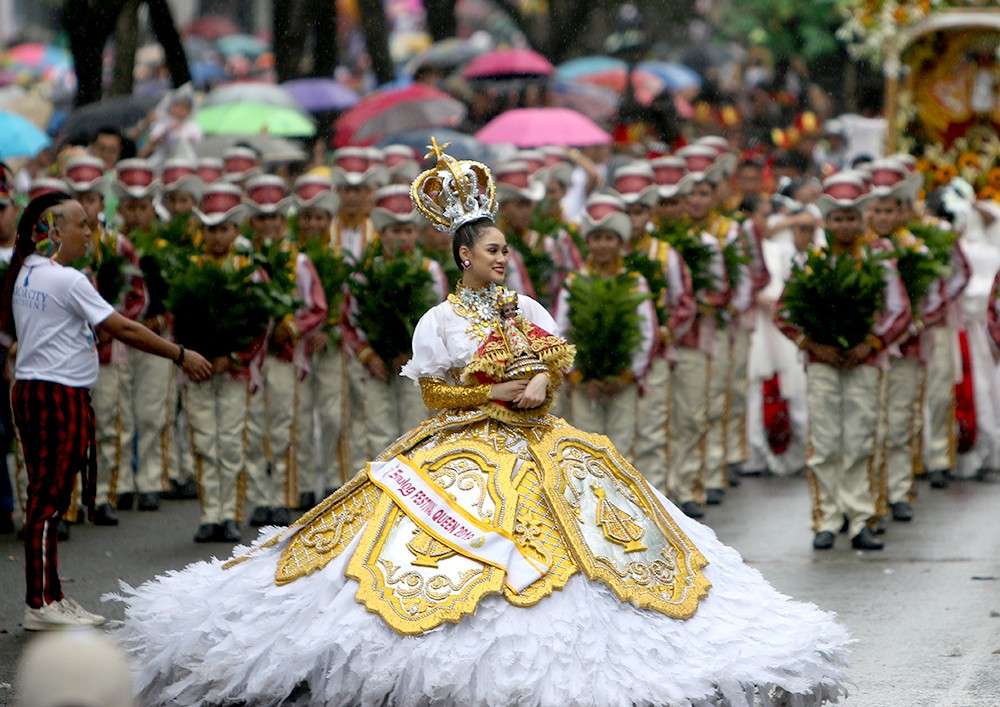 GRAND SLAM WINNER: After its candidate was crowned Festival Queen last Friday, the Carcar City Division goes on to win Best in Ritual Showdown, Best in Costume, Best in Musicality and Best in Street Dancing in the Sinulog-based category during the grand parade competition on Sunday, Jan. 20. (SunStar foto/Alex Badayos)

"HOPE is the thing with feather, that perches in the soul, and sings the tune without the words and never stops at all."

Fans of Emily Dickinson will recognize that excerpt from one of her most celebrated poems.

Others, though, who have little interest in literature, were given a glimpse of the poem’s content through the performances of Tribu Malipayon of the Municipality of Consolacion and Carcar City Division during the Sinulog grand parade on Sunday, Jan. 20.

Carcar and Consolacion both won P1 million each for the top spots of the ritual showdown of the Sinulog-based and free interpretation categories, respectively.

Tribu Malipayon did more than show how natives lived in austerity and valued their resources, especially the bamboos that gave them shelter and livelihood.

They, too, showed the audience that hope will always be stronger than fear as they battled the pests that infested their beloved bamboo forest by lifting their troubles to Señor Sto. Niño.

Because of this, Consolacion was able to bag the first place award in the free-interpretation category. They were also named best in costume and best in musicality in the same category.

The team defeated crowd darling and 2018 Sinulog free-interpretation champion Tribu Kandaya of the Municipality of Daanbantayan.

Consolacion received warmth and loud cheers from the spectators who were impressed with their fluid movements and their dancers hanging gracefully off bamboos.

They donned a red and gold ensemble adorned with black feathers that complemented the life-sized replicas of the Holy Child Jesus that the dancers carried.

Nestor Jardin, chairman of the board of judges, said it was Tribu Malipayon's well-polished and outstanding execution of the choreography for both dancers and props men, and the dancers’ swift transitions that helped the team take home the grand prize.

"Their performance was full of beautiful surprises and they were also a clear audience favorite. They made a refreshing experiment on their movements," he said.

Jardin said they had to deduct points from Cotabato and Placer for going overtime, and this led to changes in the ranking.

Although a kaleidoscopic festival, Carcar took the road less traveled and opened their performance with a group of guerillas about to gun down some prisoners of war.

While the men may not be strangers to bloodshed and battles, they told the audience a story of how hope could be the greatest source of strength.

Carcar had prisoners behind bars praying the rosary and capped their performance with "Sinulog for hope. Sinulog for freedom" written in black bold letters against a golden backdrop.

For their costume, the team started with an old rose ensemble, which they later changed into a white and red baro't saya.

This landed them a grand slam win, even defending their 2018 title.

Carcar did not only clinch a back-to-back win, they also bagged the best in costume and best in musicality awards in the Sinulog-based category, and the street dancing contest.

Larry Gabao, chairman of the board of judges for the Sinulog-based category, said Carcar was grounded on the heart of the celebration, which was venerating the Señor Sto. Niño.

"It was clean, precise and the movements complemented the whole production. They also gave importance on how the men then valued women. They also created something new by incorporating leaves, instead of just candles. Their team is almost perfect and they were brave for taking the plunge," he said.

A finale showcasing the basic services of the Cebu City Government followed by a five-minute fireworks display capped the event.