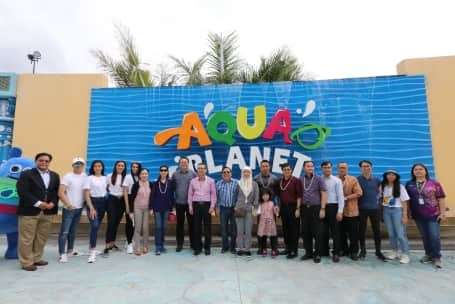 In its vision to make this Freeport as one of the most modern economic hubs in Asia, the state-owned has leaned towards attracting more investments that also provided additional employment, driven growth on its finances, while creating more opportunity for infrastructure development and community enhancement.

Being the showcase of the current administration’s economic strategy, some infrastructure projects that are in support of the government’s “Build Build Build” program are being constructed.

In a report presented by the CDC vice president for Engineering Services Group Alveen Tabag to CDC president Noel F. Manankil, the projects are laid with the purpose of ensuring the smooth traffic flow on key entry and exit points in this Freeport, in anticipation of the expected influx of investments and human traffic in the next five years.

These improvement projects include the Manuel A. Roxas Highway expansion and asphalt overlaying. The provision of the said project involves shrouding of 50 millimeter (mm) thick Stone Mastic Asphalt with Polymer Modified Bitumen which is expected to be finished by January 2019. Other road improvement projects also include the widening of M.A. Roxas Highway from J. Abad Santos to C.M. Recto Avenue.

Along with the development of the major roads here, CDC has also devised a plan that focuses on mass transportation in this Freeport.

This project is the on-going construction of the Bus Rapid Transit (BRT) System with an initial ten available buses. BRT System is envisioned to be a more efficient mass transit system that will ease the traffic on routes going in and out of this Freeport.

The Parade Grounds and other parks here comprising of the Children’s Park, K9 Cemetery and the new Pampanga Food Street among others are also under going enhancement program.

The renovation of barn houses, preservation and beautification of trees in the parks and highways and construction of bike lanes are also on-going.

The state-owned firm now have a total of 1,038 locator companies bringing in an additional 89 locators who operate here compared to a total of 949 companies in 2017.

The major areas of concentration of these workers are on Manufacturing, and Information Communication Technology–enabled industries.

CDC also made leaps and bounds with an upsurge on its financial performance.

CDC assistant vice president for Finance Alizaido Paras mentioned that as of October 2018, the net income of the state-owned firm has reached P1.19 billion and has remitted 700 million cash dividend last April 2018.

In 2017, the state-owned firm breached an unprecedented P1 billion net income as it also celebrated its 25th year.

Paras also mentioned that the revenue surged to a total of P2.34 billion for third quarter alone.

The Freeport’s export value was also recorded at $4.7 billion which is only for June 2018, posing a notable gain considering the export value for 2017 was at $6.87 billion.

Apart from its mission of generating investments and employment, CDC has also created some initiatives to improve the lives of its neighboring community.

Through capacity building, more than 1300 individuals were able to benefit from its various livelihood programs that are geared towards improving the living condition of marginalized communities near this Freeport.

The Specialized Training & Employment Program for Underprivileged Persons (Step-Up) was also conducted to enable the trainees or graduates to have a source of income while remaining closer to their residences.

Under their health program, a medical mission which benefitted 968 individuals was also conducted. Other activities that were held are distribution of clean and potable water and distribution of wheelchair, medical and other assistive devices to selected communities near this Freeport.

The said organization which was spearheaded by CDC will follow some proposed initiatives in giving back to community that will assemble and organize themselves to build a sustainable, collaborative, and synergistic impact approach in helping communities and in engaging employees.

A total of 200 events including running events, festivals, spectator events, motorsports, and cycling activities among others were held in this Freeport. These various events were able to attract some 509,328 tourists and guests to visit here in 2018.

Manankil noted that the economic growth experienced in this Freeport are being realized through the contributed support and effort of various sectors of workers, investors, local government units and other neighboring communities of this Freeport.

For the coming years, this Freeport is envisioned to create more opportunities that lead to inclusive growth and development not only for Central Luzon but also on areas across the country.