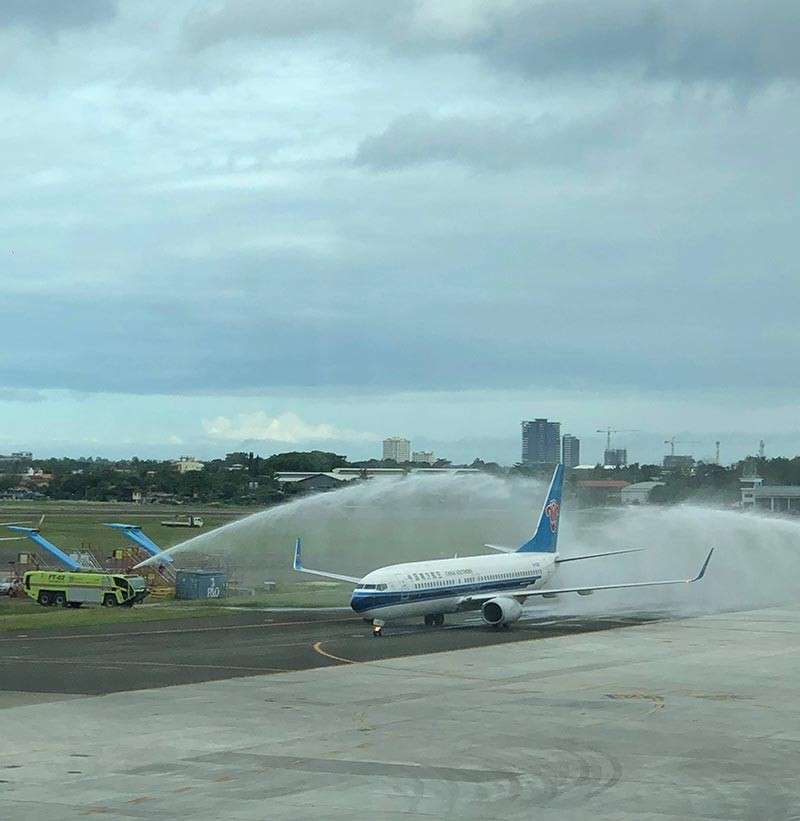 COLD SHOWER. Water is doused on a China Southern aircraft as it lands for the first time at the Mactan-Cebu International Airport. China Southern flies three times weekly to Guangzhou. (Contributed photo)

Some 147 passengers on board China Southern Airlines Boeing 737-800 aircraft arrived in Cebu on Tuesday, Jan. 22, marking another direct connection to China in Guangzhou.

China Southern Airlines is a four-star airline that will serve the Cebu-Guangzhou route with thrice weekly flights scheduled every Tuesday, Thursday and Saturday.

Guangzhou is China’s third biggest city after Beijing and Shanghai. It boasts of colonial-era and avant-garde architecture.

China Southern’s newest route will cater to the growing number of Filipinos who are flying to various destinations in China, as well as international travelers who seek easy access to Asian cities from Cebu.

Some 120 passengers departed Cebu on board China Southern back to Guangzhou, China on Jan. 22.

Deng Hui Min, sales manager at China Southern Airlines Manila, said there are a lot of things that Filipinos can do in Guangzhou.

Deng said Guangzhou is not only famous for the business and trade event known as the Canton Fair, it is also known for the wonderful scenery, authentic Cantonese cuisine, natural parks and historic spots, street shopping, modern buildings, theme parks and local culture, especially those featured in Cantonese Opera.

“Guangzhou is one of the many cities in China with a 72-hour visa-free transit policy,” said Deng.

He said the airline’s maiden flight came in time to usher in the new year and is a good follow-up of the recently concluded Sinulog Festival.

Meanwhile, the MCIA is set to welcome back Juneyao Airlines for the launch of the Cebu-Shanghai-Pudong flight on Thursday, Jan. 24, with thrice weekly flights every Tuesday, Thursday and Saturday.

According to GMCAC, it will utilize an Airbus A320 with a capacity of 158 passengers, with business and economy accommodations.

Juneyao Airlines is a privately-owned airline and operates two hubs at Shanghai Pudong and Shanghai Hongqiao airports. It is also the launch carrier of the Star Alliance connecting partner.

Juneyao Airlines previously operated charter flights in the same route but only for a few weeks in November 2017.

“We are delighted to welcome back Juneyao Airlines to MCIA. With its strong domestic connection, Juneyao Airlines will offer more opportunities for Cebu into the vast Chinese market, specially that it is headquartered in Shanghai,” said Aines Librodo, GMCAC head of airline marketing and tourism development.

Moreover, Tamano said they are looking forward to more arrivals from China with the upcoming Chinese New Year celebration.

“China as a tourism market for the Philippines actually came in late. Our neighboring countries like Thailand have long been enjoying their big volume of arrivals but we are happy we are already starting to attract them,” said Tamano.

Arrivals from China to the Philippines in the first three quarters of 2018 reached 972,550, making it the country’s second largest source market with a high-speed growth of 34.9 percent.

Tamano believes that China is a stable tourism market. In fact, he said destinations around the world are fighting over China’s outbound market.

But to sustain investments like this, both countries need to work together.

Tamano said China and the Philippines need to boost their marketing initiatives, not only to attract more Chinese tourists, but other foreign nationalities who wish to visit Cebu.

Cebu tourism stakeholders, on the other hand, should also work together with their counterparts in China to entice Filipinos to visit one of the world’s economic powerhouses.