The splendor of Slovenia: Tales from my feet 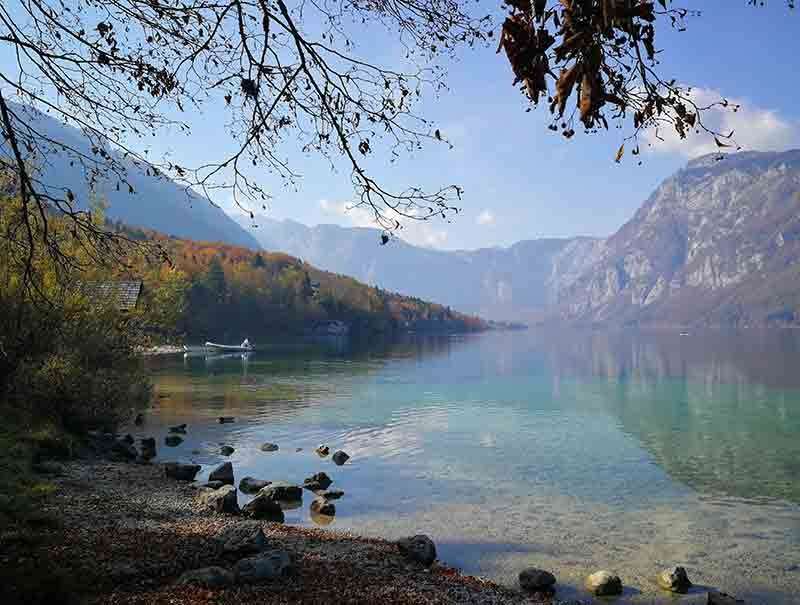 Lake Bohinj with the Julian Alps 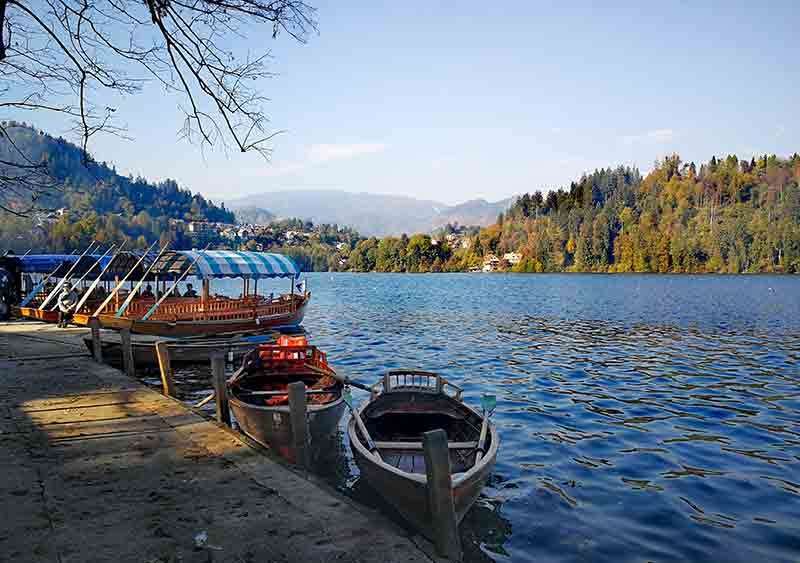 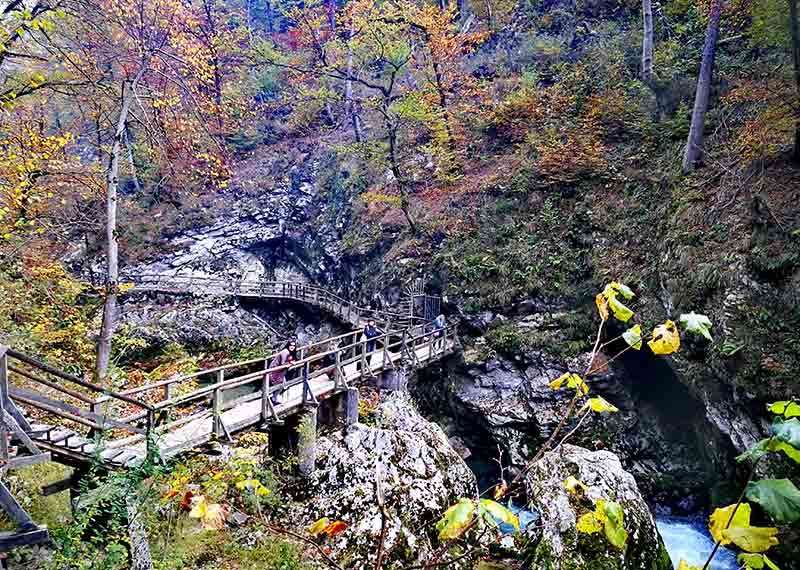 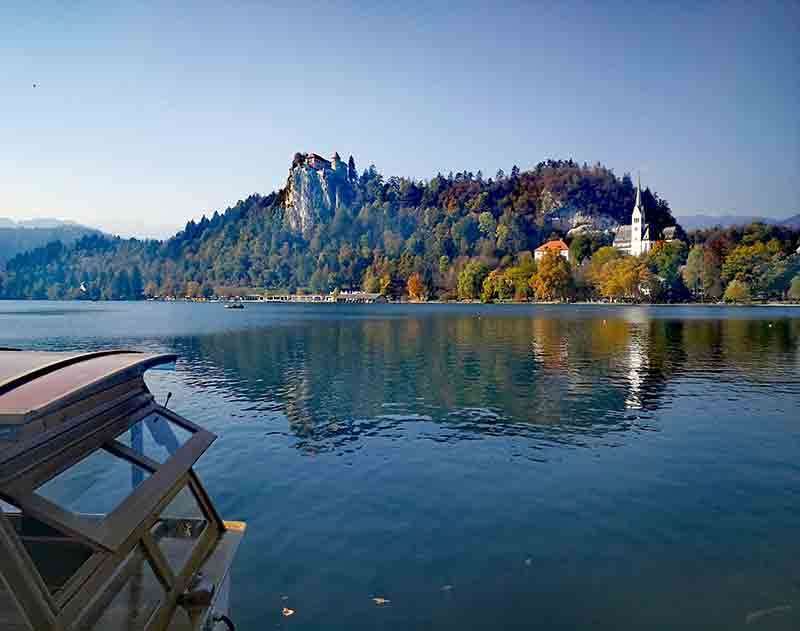 Bled castle to the right on a cliff 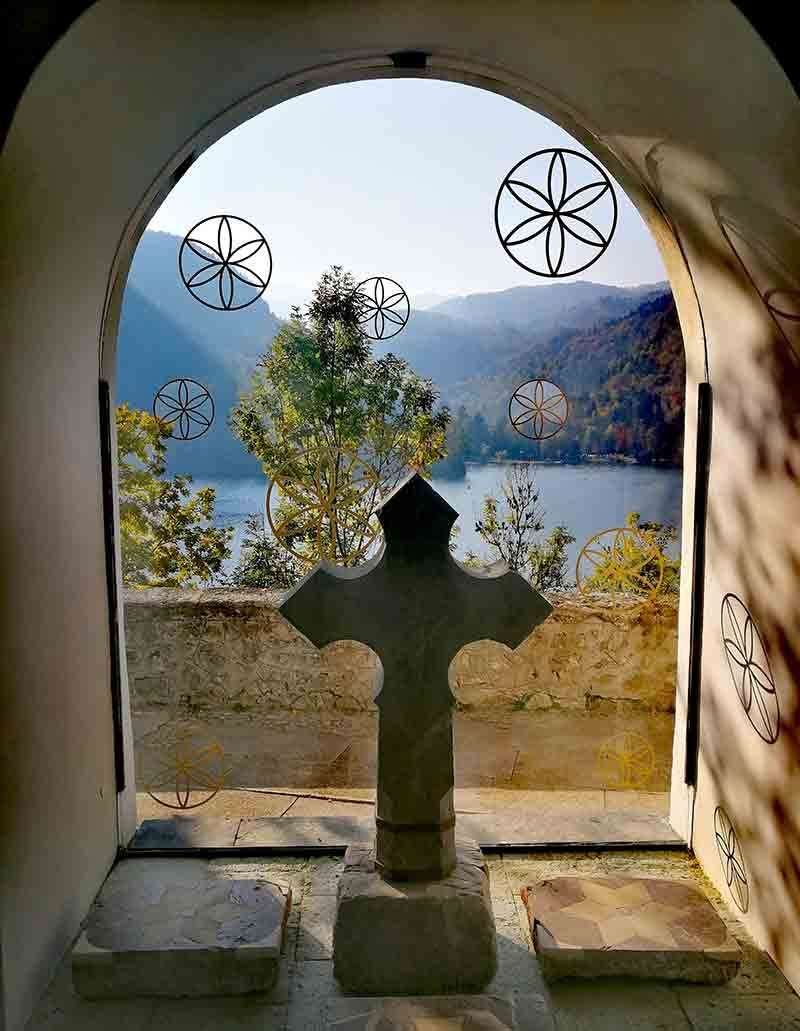 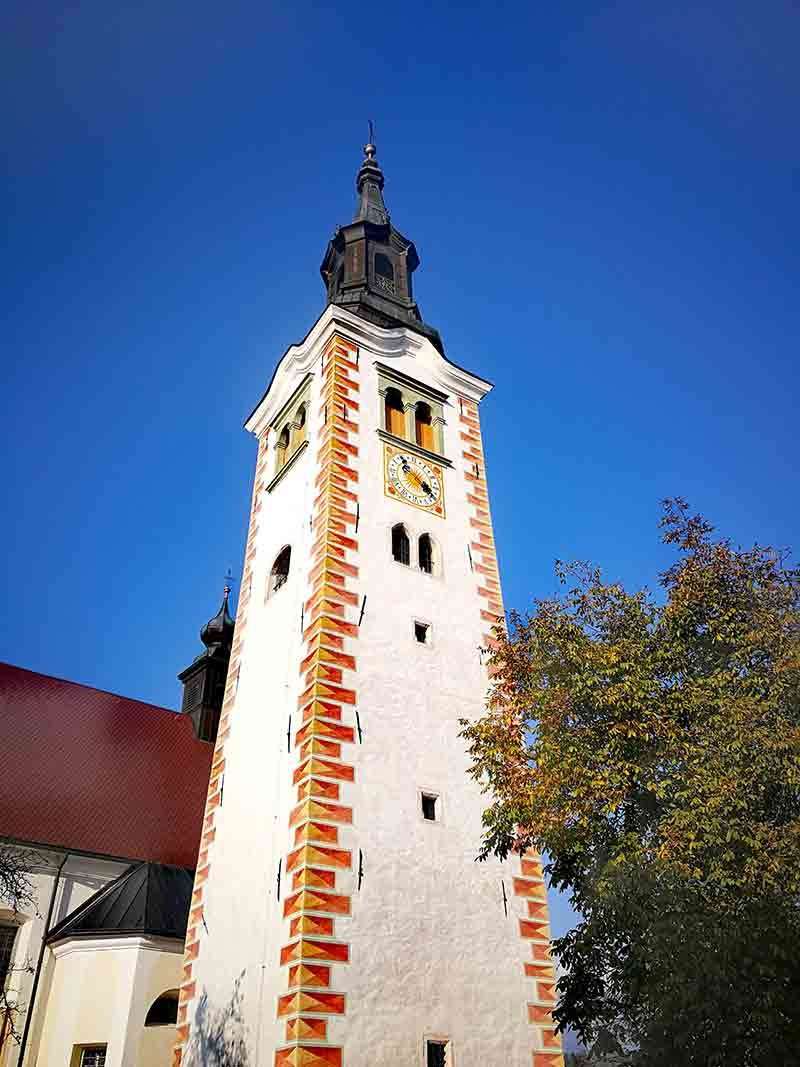 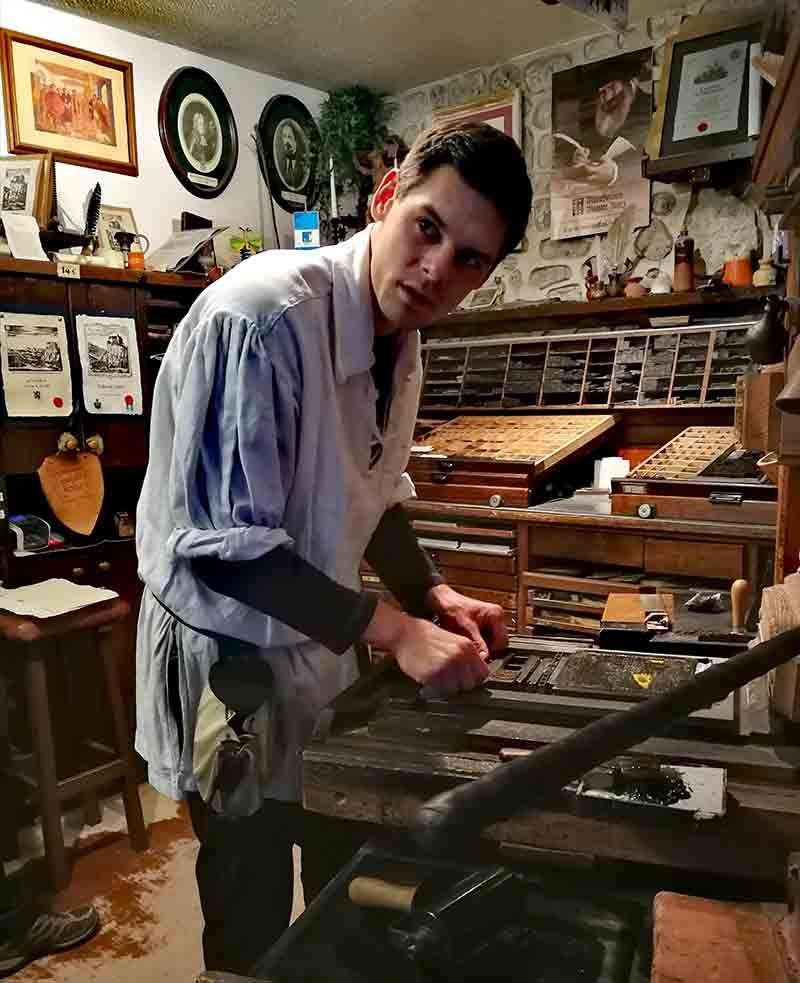 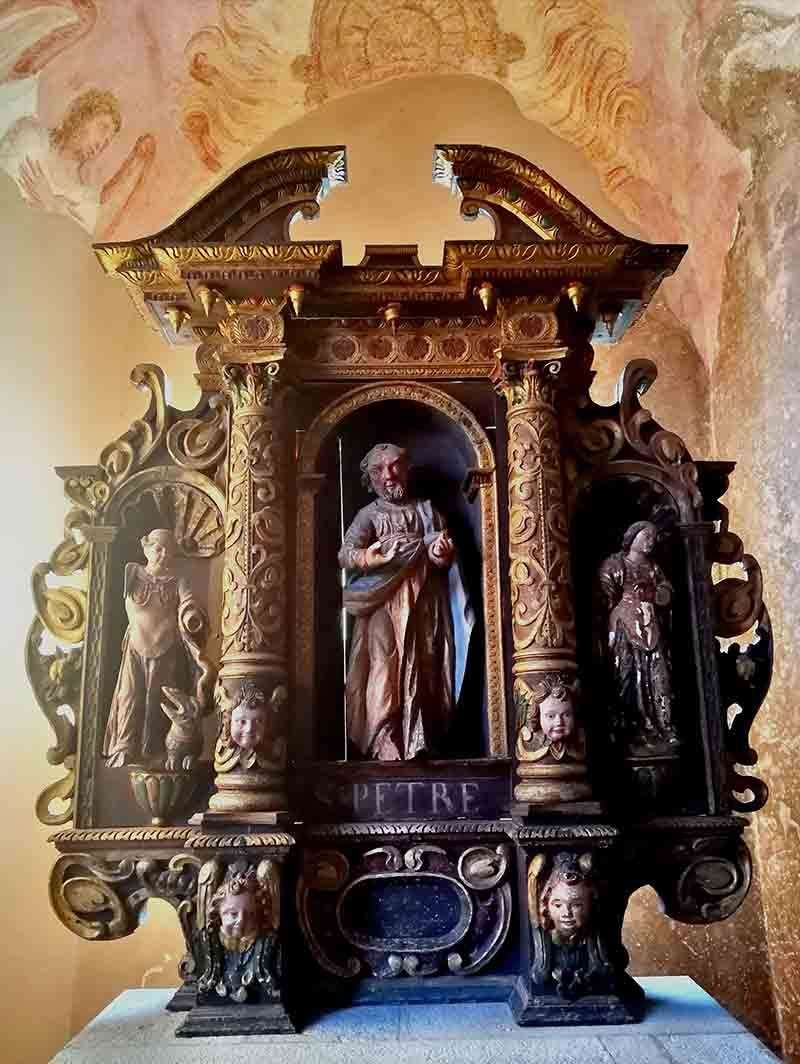 We alighted from the bus we took straight from the airport in Vienna and had our first glimpse of Ljubljana - Slovenia’s capital, largest and most populous city.

Present-day Slovenia shares borders with Austria, Italy, Hungary and Croatia, it serves as a great base for moving around this region.

Our travel-weary bodies breathed in the crisp autumn air as we made our way to our apartment near this city’s most famous landmark – the Dragon Bridge.

The Lonely Planet website describes Ljubljana as “elegant and leafy” and within my first hour of arrival, I was in total agreement. It was love at first sight for me and my “Lubiana” (as locals pronounce it).

The unearthing of the oldest musical instrument in the world – a pierced cave bear bone – occurred here, so I was in a place that had been inhabited in since pre-historic times.

The next day, we found ourselves in a van with Barbara, our tour guide.

She was handing out leaets and told us, “The world has to know more about Ljubljana,” as she drove us to our first stop.

Also called the Bled Gorge,this natural wonder is part of the Triglav Natural Park. It is about a mile-long walk with paths and wooden walkways (named Zumer Galleries after Mayor Jakob Zumer, who ordered its construction ), that have been continually rebuilt since 1893.

Several observation bridges give you the time to stop, look and bask in the bliss of being one with nature.

The stream creates pools and rapids and ends in Sum Falls, the largest river waterfall in all of Slovenia.

This is one of those places where even the most beautiful photos will pale in comparison to actually being amidst it all.

Like nature showing off, leaving the audience to do nothing but gasp and clap in awe.

We knew we were nearing our next stop as the sheer force of autumn foliage met our eyes. Situated in the heart of the Julian Alps, this valley, in my humble opinion, is my definition of “heaven on earth”.

Its crown jewel, Lake Bohinj, covering all of 318 hectares, is the largest permanent glacial lake in Slovenia.

The sight of this mirror-like body of water glistening in the sun, ducks seemingly chasing each other near the shore and colorful boats anchored along the dock seemed to be part of an ongoing painting session.

I felt like I was disturbing the peace because I lingered for awhile by the shoreline.

Our guide had suggested a Vogel cable car ride up to the Ski Center, and what an experience that was! The whole brown-orange-yellow-gold-magenta-colored mountainside made the ascent so dramatic, and reaching the top, you come face to face with the Julian Alps.

I really just wished we had the time to tire ourselves with the view, but alas, we were only visiting.

Legend has it that if you climb the 99 stone steps to reach the Assumption of Mary Church on Bled Island, listen to the church bell, then ring it yourself, your wishes will come true.

With that in mind, we found ourselves entering Villa Bled, our guide’s first stop and introductory point to the most photographed and most popular Slovenian tourist attraction, Bled Island.

Villa Bled was constructed in 1947 and was a former summer home and royal residence and has the perfect position of directly facing Bled Island.

It is a boutique hotel now, but it allows guides to bring small groups inside to get a glimpse of probably the best view one can ever get of that famous island.

The greatest Slovene poet France Preseren once described Lake Bled and its surrounding areas as a second Eden, and I doubt that there is a soul who will disagree.

This lake of glacial and tectonic origin is a favorite spot for international rowing competitions, and there is actually an option to rent a boat and do the rowing yourself to get to Bled Island, presuming that you have both the time and skill.

The usual touristy way to get to the island is a wooden boat called “pletna” and the oarsmen who navigate these boats descend from families that have lived here in 1740 - when Empress Maria Theresa granted 22 families exclusive rights to ferry religious pilgrims across the lake to worship on the island.

Once we got to the island, we made our way up the steps to that famous Church and were lucky since there was hardly anyone there.

One by one, we waited for our turn to ring the church bell – only to find out that it was quite a daunting task; when you tug on the rope, the weight of the bell catches you by surprise, but we did it! Bell rung, wish made, we were such happy pilgrims.

We made it back to shore and started our ascent towards Bled Castle. A medieval castle, smaller in size than those we see in many other parts of Europe, it functioned more as a fort with fortified walls that successfully defended itself from attackers over the years.

It has no luxurious halls and rooms, but the Castle Chapel, Printing Shop and paintings of coat-of-arms in fresco technique are worth the visit. Out on the terrace, there is a panoramic view of Bled Island, the lake and the countryside of the Gorenjska region.

In a few hours, we were back at the Old Town of Ljubljana. If in the early morning the area surrounding the Dragon Bridge is foggy and eerie, after sunset it comes alive.

The cafés are brimming with people, the street musicians crowd around the Triple Bridge and our favorite Food Market run by local merchants offers Asian, Spanish, Italian and local delicacies with endless rows of chocolate in all forms.

Our visit to Slovenia was too short, but it was more than worth the long journey to get there. Its beauty exceeded my expectations and the people we met were very warm, spoke good English and were passionately proud of their rich history.

Yes, the world will soon know about Slovenia and people will come in droves. But not too soon please, because when I return, I would like to have my moment alone with the gorge and the lake and the warmth in my heart that both bring.