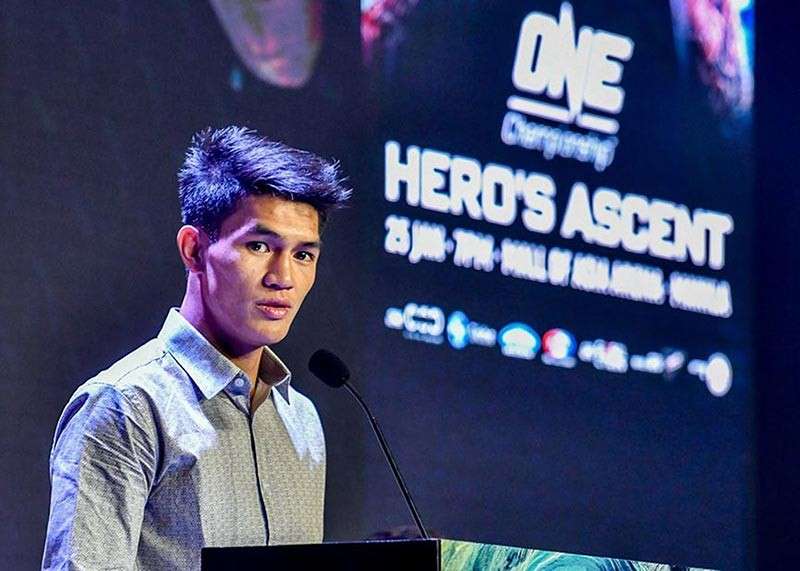 BAGUIO. Danny Kingad expresses his thoughts on his upcoming bout against Tatsumitsu Wada during the “Heroes Ascent” press briefing. (Photo by ONE Championship)

TEAM Lakay rising star Danny Kingad promised to unleash his striking prowess when he returns to the ONE Championship cage at ONE: Hero’s Ascent on January 25.

Kingad will take on Japanese contender Tatsumitsu Wada at the Mall of Asia Arena in Manila as he looks to cement his position as the top contender for the ONE flyweight world title.

Wada is coming off an impressive first-round submission win, but Kingad is riding the wave of three consecutive victories – including one of the bouts of the year against Yuya Wakamatsu.

Kingad revealed he has been studying plenty of tape on Wada, and he is ready to impose his high-energy combination of striking and wrestling to secure the victory.

“When I learned that he would be my opponent, I prepared myself because he is good on the ground,” he explains. “So, that’s why I’m now preparing to knock him down.”

The Filipino hero says he is confident he has the skills and game plan to defeat the 32-bout veteran on home soil and set himself up for a big year in 2019.

“I’ve always thought I would get my hand raised in this match – that’s my prediction,” he says.

The 22-year-old admits he is unsure of his immediate career path, but says he will remain focus on developing as a martial artist, so if his opportunity to go for glory does arrive, he will be ready to grab it with both hands.

Like the rest of his rivals in the talent-filled ONE flyweight division, Kingad’s ultimate dream is to capture the world title.

However, that quest to reach the flyweight summit will not see him face his teammate, close friend, and current king of the weight class, Geje Eustaquio – who will defend his belt for the first time in a rubber match with Adriano Moraes in the main event.

Out of respect for his friend and colleague, Kingad says he will not challenge him for the belt.

“I would not fight with Geje because as I’ve said, I respect him so much because he is my senior,” he explains. “Also, when I started at Team Lakay he was there all the time to help me.

It begs the question of how Kingad plans to approach his immediate career while his teammate holds the gold. It is an unusual situation, but he says he will not make things awkward. As long as his compatriot is on top, Kingad just wants to face every one of the other top athletes in the division.

But before any thoughts turn to his next opponent – world champion or otherwise – Kingad knows he has to deal with the immediate challenge of Wada.

“We all have the same goal, to be a world champion. So, training will continue,” he states.