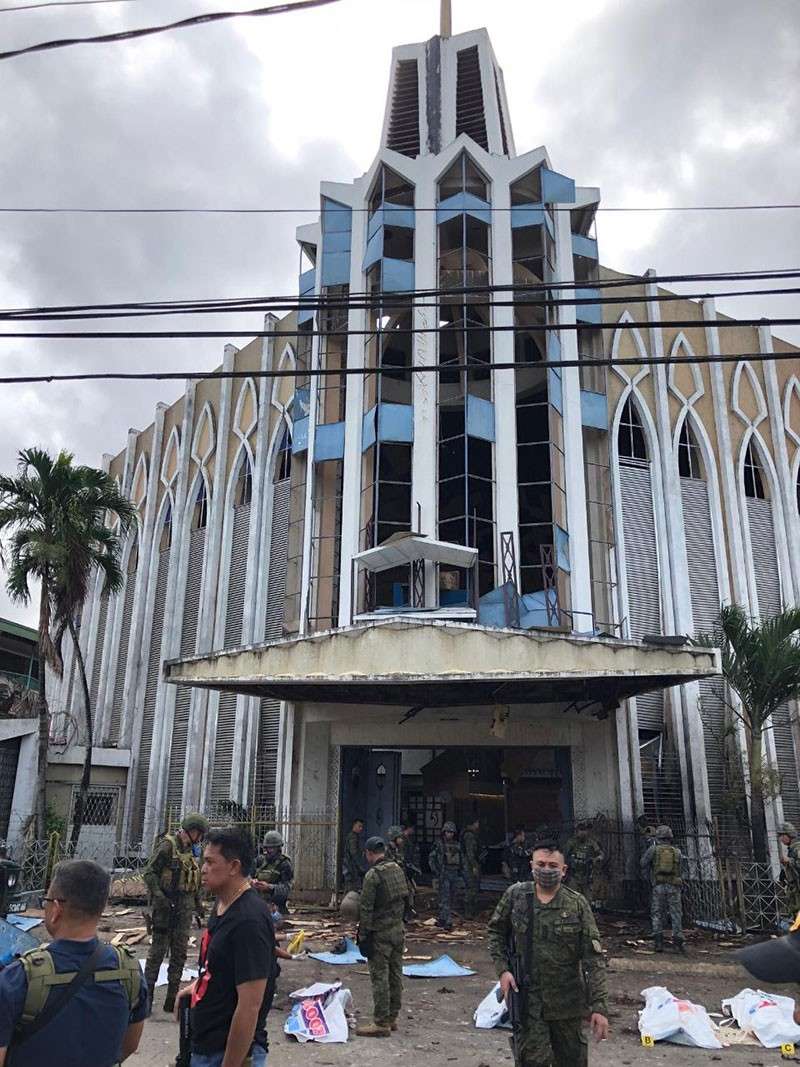 JOLO. Two improvised explosive devices (IED) went off at the Cathedral of Our Lady of Mount Carmel in Jolo, Sulu on January 27, 2019. (Western Mindanao Command Photo)

MALACAÑANG and the Autonomous Region in Muslim Mindanao (ARMM) on Sunday, January 27, strongly condemned the twin explosions that killed more than a dozen people and wounded 77 others in Jolo, Sulu.

Two improvised explosive devices (IEDs) went off inside and outside the Cathedral of Our Lady of Mount Carmel one after the other just before a Mass was to be celebrated in the church and despite the heavy security in the area.

Presidential Spokesperson Salvador Panelo, in a statement, said authorities are investigating the brazen attack and were still trying the identify the group behind it as of Sunday afternoon.

"By their act of terrorism and murder of soldiers and civilians, the enemies of the state have boldly challenged the capability of the government to secure the safety of the citizenry in that region. The Armed Forces of the Philippines will rise to the challenge and crush these godless criminals," Panelo said.

"We will pursue to the ends of the earth the ruthless perpetrators behind this dastardly crime until every killer is brought to justice and put behind bars. The law will give them no mercy," he added.

Posted by Office of the Presidential Spokesperson on Saturday, January 26, 2019

ARMM Governor Mujiv Hataman, in a separate statement, noted that the bomb attack was carried out in a place of peace and worship.

Hataman also noted that the attack "comes at a time when we are preparing for another stage of the peace process in Mindanao."

Hataman called for calm and vigilance as he urged the public to cooperate with the authorities.

"Let us avoid making speculations on this incident as the police conduct their investigation. Let us continue working for peace in the region. Violence should not deter us from continuing our work to establish a lasting peace in our homeland," he said.

Posted by ARMM Bureau of Public Information on Saturday, January 26, 2019

The incident happened two days after the Commission on Elections (Comelec), sitting as the National Plebiscite Board of Canvassers, declared the ratification by ARMM of the Bangsamoro Organic Law.

Under the BOL, the ARMM will be replaced with the Bangsamoro Autonomous Region in Muslim Mindanao.