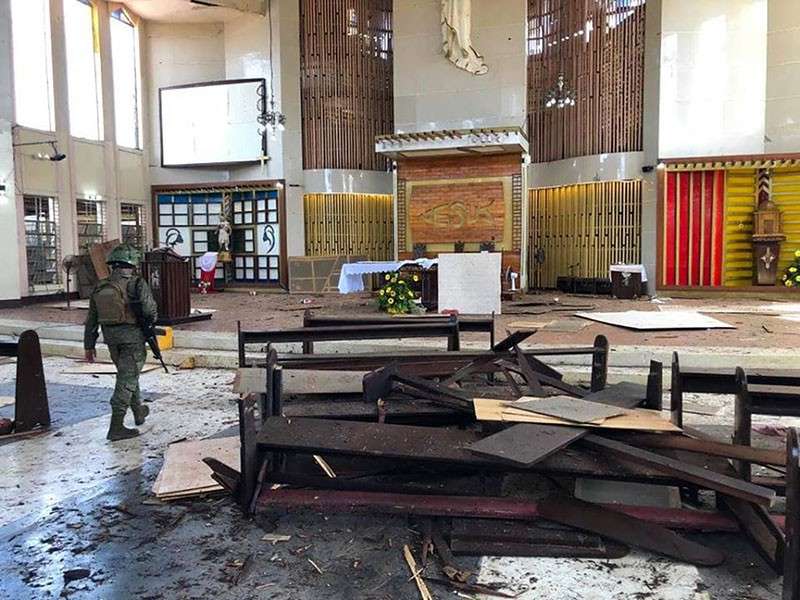 JOLO. The scene after the bombing inside the Cathedral of Our Lady of Mount Carmel in Jolo, Sulu on January 27, 2019. (Photo from cbcpnews.,net)

CATHOLIC bishops on Sunday, January 27, condemned the twin explosions at a cathedral in Jolo, Sulu and described this as an "act of terrorism."

In a statement, the Catholic Bishops' Conference of the Philippines (CBCP) called on all Christians to “join hands with all peace-loving Muslim and indigenous people communities in the advocacy against violent extremism”.

“May all our religions of peace guide us in our quest for a brighter future for the peoples of Mindanao,” they said.

Two improvised explosive devices (IED) went off at the Cathedral of Our Lady of Mount Carmel in Jolo, killing a dozen people and wounding around 80 others.

Authorities said the casualty toll increased after security forces responded to the first blast, which occurred between 8 a.m. and 9 a.m. Sunday, inside the church.

A second blast occurred at the parking lot of the cathedral shortly after the first explosion.

“We condole with the families of the several soldiers and civilians who were killed by the explosions. We also express our sympathies with those who were wounded and extend our solidarity with the rest of the church-goers inside the Cathedral and the rest of the church community in the Apostolic Vicariate of Jolo,” the CBCP statement signed by Archbishop Romulo Valles, CBCP president, stated.

The attacks took place two days after the Commission on Elections (Comelec) declared the ratification by the Autonomous Region in Muslim Mindanao (ARMM) of the Bangsamoro Organic Law (BOL).

The Comelec, sitting as the National Plebiscite Board of Canvassers, recorded more than 1.5 million "Yes" votes against the 198,750 “No” votes.

Sulu Governor Abdusakur Tan II had also questioned the constitutionality of the BOL before the Supreme Court. (MVI/SunStar Philippines)