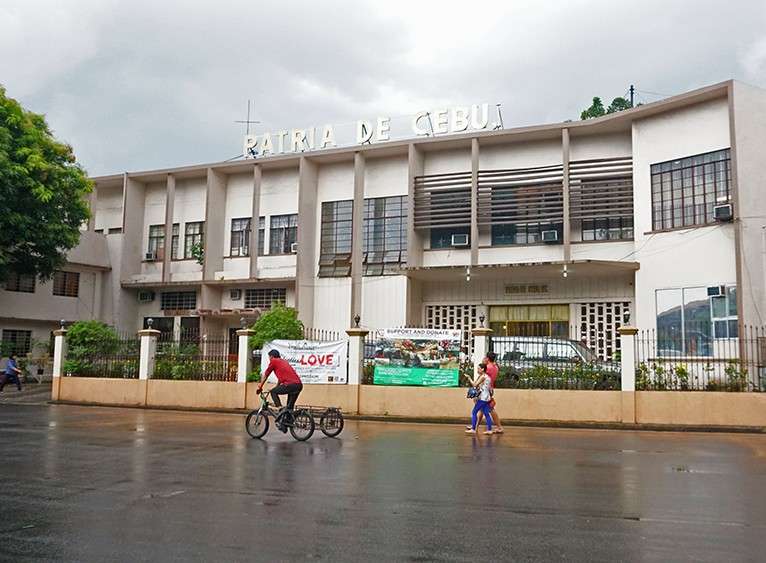 DON’T BLAST THE PAST. Constructed in 1954, the Patria de Cebu is one of the earliest buildings in Cebu to display the “international style” of architecture and install the tie-beam innovation that enables it to withstand earthquakes. (SunStar file foto)

IT isn’t over yet.

In a Jan. 12 post on the official Facebook page of the Cebu Heritage Society, a civil society group of heritage advocates, Eileen G. Mangubat emphasized the involvement of the public in continuing the campaign to save the Patria de Cebu, a 64-year-old religious and historical landmark, from demolition in a project intended to revitalize downtown Cebu: “Taxpayers have a say in especially sensitive urban development projects.”

Last Jan. 15 and 16, architect Melva R. Java and Mangubat tendered, respectively, their resignations to Cebu Archbishop Jose Palma, who had appointed them as members of the Cebu Archdiocesan Commission for the Cultural Heritage of the Church.

The Commission, which is tasked “to oversee the ‘conservation, restoration, and preservation’ of parish churches, their adjunct structures and the Archdiocesan Museum of Cebu,” has 11 other active members and is chaired by Fr. Brian Brigoli of the San Carlos Seminary College, wrote Mangubat in a Jan. 21 email to editors of the Cebu dailies.

The Patria is at the center of a controversy testing how Cebu stakeholders prioritize the legacies of the past in the blitz for modernization. A plan to redevelop the Patria into the centerpiece of the Catholic Church’s Jubilee Year festivities in 2021, marking the fifth centenary or 500th anniversary of the arrival of Christianity in the Philippines, was formalized when the Cebu Archdiocese and the Cebu Landmasters Inc. (CLI) signed an agreement last Oct. 29. The CLI has turned over to the Archdiocese a P50-million advance rental for its 40-year lease of the property, which will be demolished to make way for an integrated shopping center, office and hotel structure.

“We want the redevelopment of the Patria to proceed—based on sound design and consultation with heritage experts,” wrote Mangubat in another email, pointing out that a “best case scenario” means the CLI compromises “to retain just the Patria administration building in front of the block, leaving all space behind it open for clearing and construction of new commercial buildings.”

In her Jan. 16 resignation letter to Palma, Mangubat admitted the challenges in the restoration or remodelling of church properties, which form Cebu heritage: “The beauty of our faith is seen in a special way in the built heritage found in cities and remote towns. In different degrees, people keep them as part of their daily lives but communities and even some clergy members, due to lack of awareness and perhaps maturity, also take for granted or damage these heirloom treasures left by past generations.”

During the Oct. 29 signing of the agreement for the Patria redevelopment, CLI chief executive officer Jose Soberano III was reported as saying that the company supports the Church’s interest to preserve heritage: “It’s not too much on what we can get out of this financially, but it’s in the sense of pride.”

If the CLI will not compromise to “preserve the old structure, re-purpose this and integrate this into the new structure,” Mangubat cited the “higher pressure” that can be marshalled for the Patria’s protection, such as the “civil laws protecting cultural heritage.”

The laity’s movement to save the Patria reveals the “potential for reform—as in the lack of transparency and the need for lay experts in decision-making by the Archdiocese and other church institutions when it involves property matters and the ways of the world... (specifically) in the competitive environment of real estate deals in hyper-charged Metro Cebu,” emailed Mangubat.

Java, Mangubat, and other advocates also urge Cebuanos as taxpayers and children of the faith to self-evaluate and reflect on what Mangubat refers to as “the value of cultural heritage—if only to let people struggle with the choices of urban development rather than take for granted the demolition of a heritage building and the nearly mindless rise of high-rise towers in the heritage core of Cebu City.”