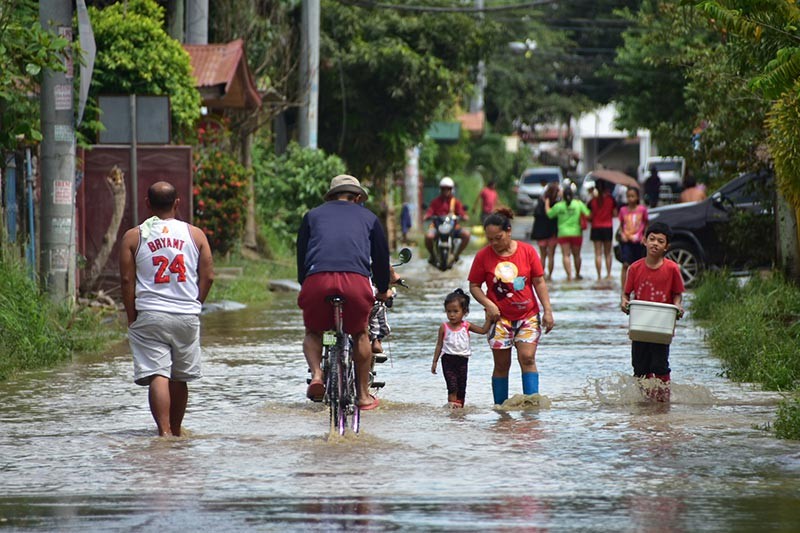 HEAVY rains have forced thousands of residents in Davao City to evacuate their flooded areas on Saturday, January 26, 2019.

The Philippine Atmospheric, Geophysical, and Astronomical Services Administration (Pagasa) announced on Saturday, January 26, at 4 p.m. that the tail-end of a cold front was bringing rain to some parts of the country.

"We have prevented the casualties because of early warning and early information to the people," Baluran said in an interview yesterday, January 27.

Police stations in San Pedro, Talomo, Buhangin and Bunawan of the Davao City Police Office (DCPO) reported more than 2,980 families were evacuated over the weekend.

The City Social Services and Development Office (CSSDO) through the Ugnayan Department, had activated the mobile kitchen to provide food for the evacuees.

Meanwhile, Baluran said that they are still monitoring the weather.

"Kung naa gani mga ingon ani nga calamities, kung naay mga announcements for preparation and evacuation, mag-follow gyud (We remind the public that if there are calamities like this and announcements have been made, they should follow)," he said, adding that there are still some residents who are stubborn and complacent with the advices of the authorities.

"Ang among purpose raman gud (Our only purpose) is to save lives, wala namo mo gidisturbo (we are not disturbing you). We are doing everything to avoid any casualty caused by flood or any calamities," he added.

Meanwhile, evacuees from the affected barangays near the Davao River went to back to their homes yesterday as the water levels have slowly subsided.

However, CDRRMO posted an update on their Facebook page that water level of the Davao River has slowly subsided. Matina River, Lipadas River, Talomo River, Bunawan River, and Lasang River were at normal safe levels as of 10:00 a.m Sunday.

Baluran said they were still monitoring the water levels in the barangays near Davao River such as Purok 20, Sangilangan Brgy. Maa, Purok 9 San Rafael, Jade Valley Tigatto, Deca Homes Tigatto, Sitio Uyanguren Tigatto, Matina Gravahan, Barangay 10-A, 9-A, 8-A, 5-A, 2-A, 1-A, 40-D with Barangay Disaster Risk Reduction and Management Committee (BDRRMC).