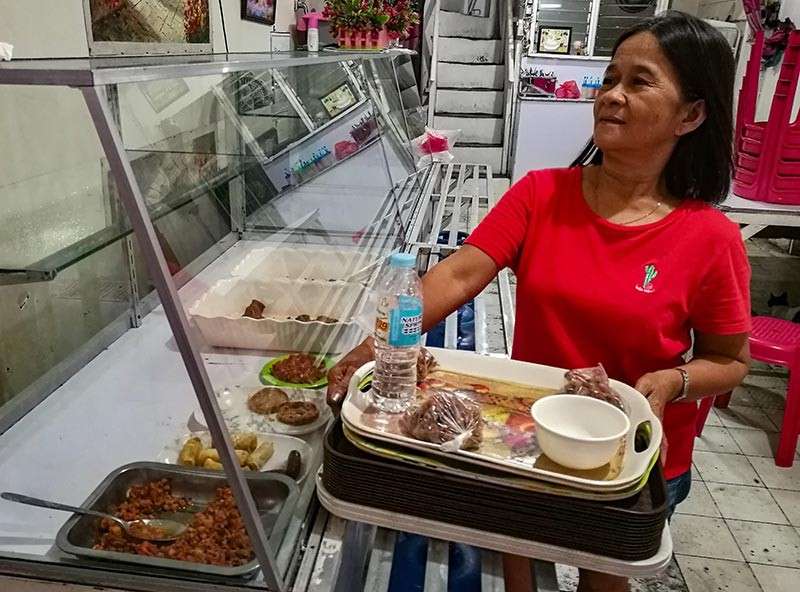 BETTER TERMS. From paying almost 20 percent in interest for informal loans, Mercedes Cari-Cari, 55, does not regret her decision to avail herself of the loan options under the Pondo Para sa Pagbabago program. (SunStar photo / Arni Aclao)

CARENDERIA owner, Mercedes Cari-Cari, 55, does not regret her decision to tap government funds to expand her small eatery.

She said it was one of the smartest decisions she made because she would only pay up to 2.5 percent monthly interest for a P50,000 loan payable for one year. The amount is a loan from the Small Business Corp. (SBC) under the Pondo Para sa Pagbabago (P3) program.

A member of the Kamansi Cooperative, Cari-Cari said she used the P50,000 as additional capital to expand her small eatery in Juliana Trade Center in Barangay Ermita, Cebu City.

“It was our coop chairman who introduced us to this P3 program. The low interest rate immediately caught my attention,” she said.

Whenever she needed an extra cash, Cari-Cari, who has been in the trading and eatery business since 1986, admitted she would borrow from 5-6 lenders, who charge a hefty interest of up to 20 percent per month.

“There was no one to approach that time who could easily give you money without going through a lengthy process. I turned to them (5-6 lenders) at the time when my three children were all in college,” she said.

She initially borrowed P20,000 from a 5-6 lender payable in two months.

But approaching these loan sharks wasn’t a smart move. Cari-Cari said that instead of helping vendors like her grow, they ended up buried in so much debt. “Plus, they get some items from you as collateral,” she added.

Cari-Cari is now approaching her fourth month paying her P3 loan. She said she is interested to renew her loan, should she need additional capital to grow her business.

State-run SBC said it released P199 million worth of loans under the P3 program in Cebu since its implementation in June 2017.

Data obtained from SBC showed that of the total loan amount released, some P127 million were released through partner microfinance institutions (MFIs) in Cebu, which benefited 3,181 micro-entrepreneurs.

Some P6 million worth of loans were also released through SBC, which benefited 188 micro-entrepreneurs. SBC said it started releasing retail loans since the last quarter of 2018.

The remaining P66 million releases coursed through MFIs are still to be liquidated until February 2019, said Ronald Saren, officer-in-charge and district manager of SBC-Visayas Group.

Saren said SBC, being the administrator of the P3 Fund, has two systems in delivering the fund to micro-entrepreneurs.

The first is through partner MFIs, which are operating nationwide. This also includes MFIs such as cooperatives, rural banks and non-government organizations.

Saren said most of their partner MFIs that are active in the P3 program are the cooperatives.

Among those cooperatives that logged a high number of borrowers are Cebu People’s Multi-Purpose Cooperative, with 1,076 P3 borrowers mostly from Cebu City going south; and Mandaue Vendors Multi-purpose Cooperative covering the areas of Mandaue City, Lapu-Lapu City, and northern towns until Carmen with 1,563 P3 borrowers.

Saren added that P3 funding can also be accessed through SBC, which directly lends to micro-entrepreneurs who are within the five-kilometer radius or within one hour travel from the nearest SBC office.

He said those who avail themselves of the P3 funding are micro-entrepreneurs who are engaged in trading like market vendors and sari-sari store owners.

Borrowers, he added, are located throughout Cebu as they also have partners in southern and northern towns.

According to Saren, most P3 borrowers pay their dues on time.

“Retail financing past due is only very minimal. Only eight out of the 188 borrowers are delayed in their payments, as of Dec. 31, 2018. Our MFI partners so far have not reported significant late payments from the P3 program,” he said.

Under the P3 Program, a micro enterprise can borrow between P5,000 and P100,000, depending on the business need and repayment capacity.

The program was rolled out in 2017 to draw away micro and small businesses from the informal lenders such as 5-6.

“The initial implementation was challenging, being a new program and with guidelines to be followed by our partner MFIs, especially that the cap for the interest is up to 2.5 percent a month only. Some partners have to adapt and add a loan program to fit the policies,” said Saren.

The Department of Trade and Industry earlier said it wants to enroll more micro enterprises and entrepreneurs under its P3 program.

Trade Secretary Ramon Lopez was quoted in a report saying that they can hit about 80,000 micro-entrepreneurs with the current P2 billion funding.

The agency also awaits the approval of its budget, which includes the P1.5 billion that is added annually to the P3 program to benefit more entrepreneurs.