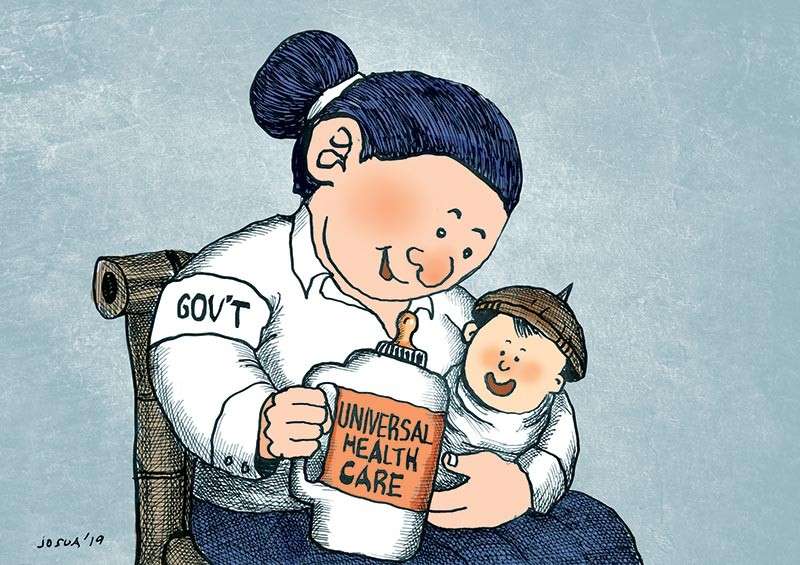 FIRST, a look at Senate Bill 1896 or the Universal Health Care (UHC) Act, the proposed expansion of the country’s health care system, which was supposedly government’s “pamasko” after the House bicameral body gave it a go late last year. But the executive probably waits for perfect timing in finally letting the law take flight.

The Mercer Marsh Benefits Medical Trends Around the World report last year showed that the Philippines has the highest medical inflation rate in Asia at 13.1%. The consumer inflation rate towards the end of 2018 was only 4.95.

Around 54% of the total health care expenditure in the Philippines directly comes from the pocket of the Filipino household. That’s way bigger than how much government spends for public health care financing, which was 34.2%.

If the UHC law isn’t passed, then we’re back to dangling Philhealth cards to voters come election season. Although there is more to the UHC that is at once universal and urgent.

What are the salient points to this law? Every Filipino is automatically covered by a set of health care benefits—no balance billing for non-contributors and fix co-payment for contributing members.

The shift in public health mindset—from taking care of sick citizens to making citizens healthy. That comes by way of free consultation fees, laboratory fees and other diagnostic procedures.

Require graduates of health-related courses from state universities and colleges to serve for three years in the public sector. This addresses the problem of patient-per-doctor ratio, which according to the DOH is 33,000 patients to a doctor. DOH stats also show a ratio of 1,121 patients per hospital bed.

How does the UHC propose to address the lack of hospitals? It will build more hospitals in far-flung areas.

How can UHC be funded? It will take the bulk of its budget from the incremental sin tax collections, half of the government’s Pagcor share, 40 percent of Charity Fund, documentary stamps, annual appropriations of the DOH included in the General Appropriations Act, among others.

Without much choice, the country’s poor fall prey to the sick scheme of health care being held hostage by politics. Wooing patronage, politicians disguise campaigns as medical missions. Public funds are parked in infirmaries to make sure indigents remember official sponsorship. Sick practices on the sick.

Advanced societies all over the world come natural with universal health care because, yes, it’s the right thing as far as human civilizations go. Let the UHC law see the light of day in the Philippines. It will be a milestone for this administration.