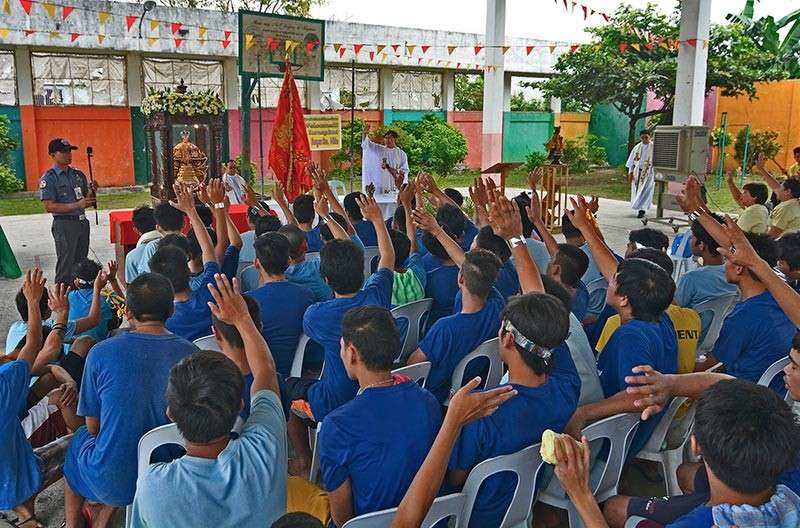 FACILITY. The Children’s Legal Bureau Inc. wants local government units to establish facilities exclusively for minors. Don’t put them in jail with adult criminals. At Operation Second Chance, the Cebu City Government-operated facility for minors in conflict with the law, minors get to interact in a way conducive to reformation. (SunStar photo / Amper Campaña)

GOVERNMENT may have to answer to the United Nations General Assembly if it lowered the age of criminal liability in violation of the Convention on the Rights of the Child.

The Convention defines a child as under the age of 18. It is not clear if there would be sanctions if the minimum age were lowered but the Convention itself recognized that the age of majority may be set by national legislation.

Lawyer Amando Virgil Ligutan, University of San Jose-Recoletos professor of International Law, said the Philippines was among the 196 nation signatories to the United Nations Convention on the Rights of the Child.

The Convention defines a child as any human being under the age of 18, unless the age of majority is attained earlier under national legislation. The Convention deals with the child-specific needs and rights. Ratifying states must act in the best interests of the child, he said.

Ligutan said the Philippines has been compliant with the Convention through the passage of laws pertaining to the rights of a child. Asked if the country will be sanctioned once it lowers the minimum age of criminal liability, Ligutan said the Convention is silent on this but the general rules on international law will apply.

“The State may be answerable to the United Nations General Assembly. Consequences (may include) reparation, declaratory relief, satisfaction, restitution and compensation,” he said.

The House of Representatives has approved on final reading a bill lowering the minimum age of criminal responsibility to 12 from the present 15 years old despite opposition from groups who said there are enough laws to protect children from criminality but there is lack of implementation.

The Senate is expected to come up with its version of the bill in plenary session next week.

Ligutan said he is against the pending legislation to lower the age of criminal liability as it will not solve criminality. “I think the government should focus on factors that affect crime rate such as poverty, lack of education, lack of opportunities, and lack of parental guidance. Anyone proposing an ideal age of criminal liability should back it up with scientific findings. It can’t be arbitrary,” he said.

Most of the crimes committed by minors are because of poverty. They commit mostly theft, robbery, malicious mischief and estafa - all under the category of crimes against property. And data showed only 1.72 percent of reported crimes are committed by children.

This is the reason sectors oppose the proposed law to lower the minimum age of criminal liability.

“We have seen with our eyes the situation of children in jail with adults. The children are mixed with adults, and we saw that in the BBRC (Bagong Buhay Rehabilitation Center or city jail). When they get out of jail, children will become hardened criminals because they learned from the adults while inside the jail,” Amit told SunStar Cebu.

The CLB said the move in Congress is “regressive and oppressive to children whose rights are endangered by the wrongful belief that putting them in jail will reform them.”

The Children’s NGO Network also said it was alarmed by the move that completely disregarded factors that made the children vulnerable to the commission of offenses. “This move is therefore misguided and hypocritical, shifting the blame on children in the guise of caring for them, while hiding the fact that it is the adults who make these children delinquent,” read its statement.

According to the Philippine Information Agency, there were over 52,000 children who were under detention or under custodial setting before the 2009 enactment of Republic Act 9344 or the Juvenile Justice and Welfare Act.

Data showed that the problem of juvenile delinquency is solidly linked to poverty, the Philippine National Police (PNP) said.

Between 2012 and 2015, PNP statistics showed that 60 percent of juvenile crimes were mostly under the category of crimes against property. Prohibited drugs and illegal gambling among children only covered four percent.

For illegal drugs alone, 300 minors were arrested in Cebu from July 2016 to March 2018 out of the total 13,603 people arrested by all operating units of the Police Regional Office 7 during that period.

The Child Rights Network (CRN) cited PNP data that showed only 1.72 percent of reported crimes are committed by children.

“This proposed measure is anti-poor, anti-human rights, and anti-children. Apart from being plainly absurd, this measure is unfounded, misguided and uncalled for,” the CRN said in a Facebook post shared by CLB last Jan. 23.