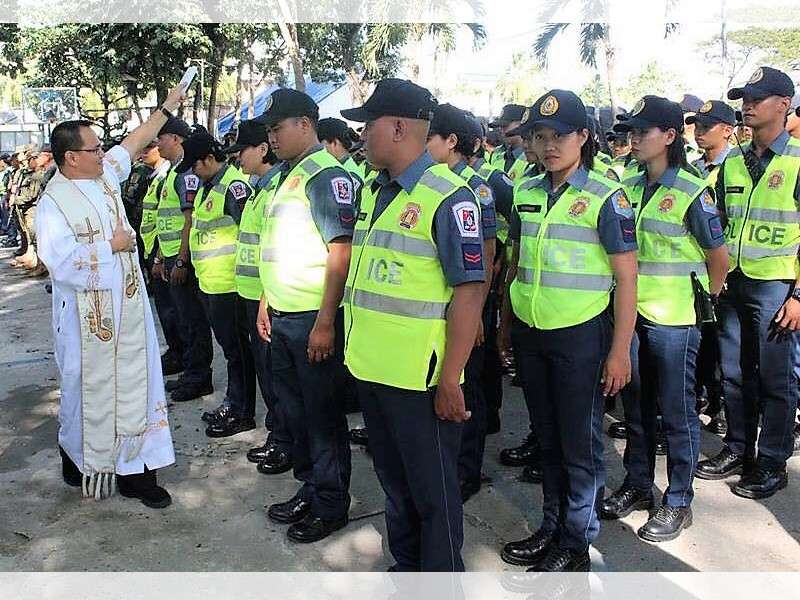 BACOLOD. A priest blesses the augmentation personnel from Police Regional Office- Western Visayas during the send-off ceremony for the Bacolaodiat Festival at the Bacolod City Police Office headquarters on Thursday, January 31. (Contributed photo)

SECURITY forces deployed for the 14th Bacolaodiat Festival this year were ordered to intensify their security measures in activity areas following the series of deadly bombing incidents in Mindanao.

Chief Inspector Lester Leada, head of operations branch, said the police were advised to strictly inspect all vehicles and people who are coming in and out of the Bacolod City Government Center, the only festival site for the festivity.

More than 600 police, military troops, and force multipliers were sent off for the festivity in rites led by Senior Superintendent Henry Biñas, officer-in-charge of Bacolod City Police Office (BCPO), at the city police headquarters on Thursday, January 31.

Of the total number, 240 police were augmentation personnel from Police Regional Office- Western Visayas in Iloilo City, on top of the 249 personnel assigned as beat patrols and the existing BCPO personnel.

Two teams composed of 46 military troops from the 303rd Infantry Brigade of the Philippine Army were also augmented to the police.

Leada said there is no threat to terrorism monitored in the city, but he appealed to the public to be vigilant and not be complacent.

He said the incident in Mindanao cannot affect the influx of people during the Bacolaodiat festival.

The BCPO is on top of the situation, Leada said.

The BCPO targets to have “zero major incident” and crime reduction.

He said 100 personnel started to be deployed for the festivity from January 30 until February 4. (GYM)