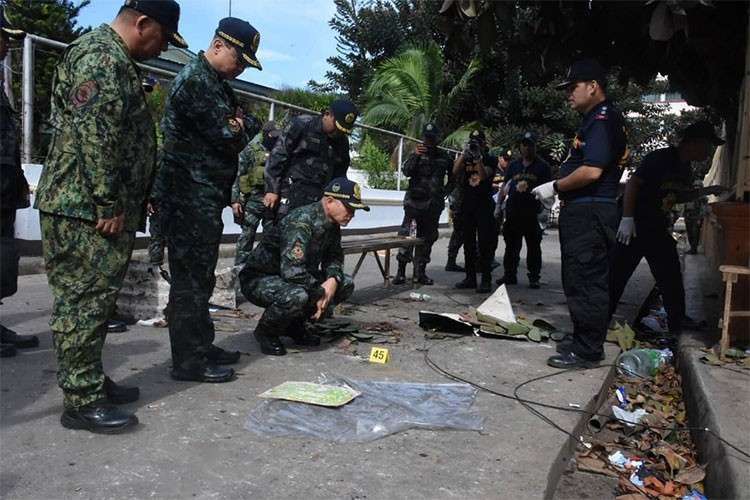 SULU. Philippine National Police Chief Oscar Albayalde and other police officials inspect the site of the blasts in Jolo, Sulu on Monday, January 28, 2018. (Courtesy of PNP)

He said investigators obtained affidavits from 36 witnesses who were among those injured when two explosions hit the Our Lady of Mount Carmel Cathedral on January 27.

According to witnesses, a man and a woman, whom they suspect were a couple, entered the cathedral.

The woman was at least 5’2” in height, with slim figure, and was wearing a gray hoodie jacket where the bag containing the explosive could have possibly been concealed.

Witnesses said the man left the woman before the first bomb went off.

He said investigators are inclined to believe that the woman was responsible for the first blast, while investigation on whether the man was behind the second explosion is ongoing.

He added that according to the Explosives Ordnance Division, the second explosive was suspended, or was not placed on the ground. It could be hanging or being carried by a person, he said.

He said another indication that the blasts were perpetrated by suicide bombers is that there were two pairs of feet with no claimants.

“Lahat ng namatay accounted, confirmed and identified by their families. Merong dalawang pair of feet na andyan na one pair, by its appearance could be belonging to a lady and another to a man...(These are) subject to DNA testing,” said Labra.

(All the fatalities were confirmed and identified by their families. But there were two pairs of feet, and by their appearance, they belong to a woman and a man. These are subject to DNA testing.)

From 21, the fatalities climbed to 22 on Friday, February 1, with the death of Thelma Villanueva, 68.

Authorities said Villanueva expired after her family decided to have her life support removed.

Labra said the affidavits of the witnesses and the pieces of evidence gathered from the blast site matched the intelligence reports gathered earlier.

Intelligence reports said a man and a woman will stage a bombing incident.

As to the nationality of the "suicide bombers," Labra said it is still being investigated.

Earlier, Defense Secretary Delfin Lorenzana identified the suicide bombers as a Yemeni couple, who was among the at least 40 foreign terrorists who entered the country.

He ruled out the possibility that Filipino terrorists can do such brutal act.

The Jolo cathedral explosion was the second suicide bombing incident in the country. The first happened on July 31, 2018 in Lamitan City, where the improvised explosive device was placed inside a van and detonated by its Moroccan driver after he was cornered by security forces in a checkpoint.

Killed in the incident were a soldier, five Citizen Armed Force Geographical Unit (Cafgu) personnel, and four civilians, including a child and a woman who were relatives of the killed Cafgu member. (SunStar Philippines)