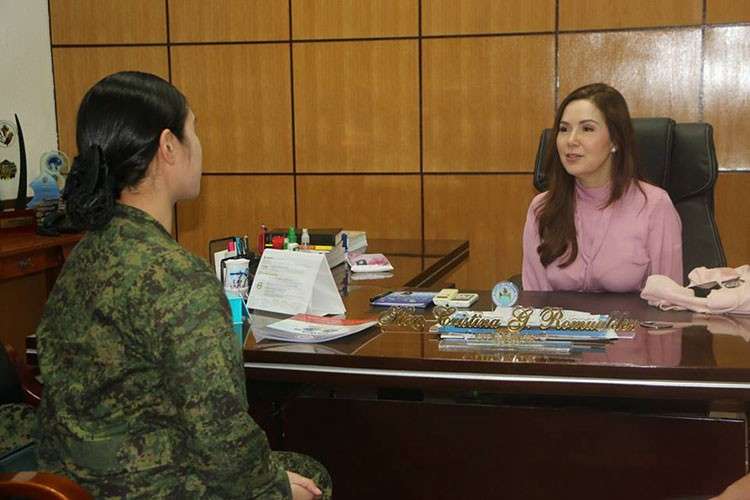 TACLOBAN CITY. Mayor Cristina Gonzales-Romualdez talks to 1st Lieutenant Kerlyn Kaye Asuncion during her courtesy visit at the City Hall on January 31, 2019. Asuncion, a member of the elite Presidential Security Group of President Rodrigo Duterte, is a native of Tacloban. Romualdez has called on the public to stay vigilant following the spate of bombings in Mindanao. (Photo courtesy of CIO-Tacloban)

TACLOBAN City Mayor Cristina Gonzales-Romualdez has urged the public to be vigilant following the spate of bombings in Mindanao.

“In light of this, I have instructed the police to increase police visibility and implementation of checkpoints in key areas,” said Romualdez.

While she called on the residents to “protect our community from any threat of terrorism,” Romualdez also expressed her “deepest condolences and sympathies to the families and loved ones of all those injured and killed in the January 27, 2019 Jolo cathedral bombings.”

“We hold in our prayers those affected by this heinous crime while expressing our solidarity with the local government of Jolo and local church officials as they respond to the incident,” said Romualdez.

At least 22 were dead and 100 others were injured in the twin bombings at the Our Lady of Mount Carmel Cathedral in Jolo, Sulu.

On January 28, a landmine explosion killed one policeman and injured three persons in Magpet, North Cotabato. A grenade attack also killed two people and injured four others inside a mosque in Zamboanga City on January 30.

President Rodrigo Duterte has declared an all-out war against Abu Sayyaf and other enemies of the government.

Panelo added the government “will pursue to the ends of the earth the ruthless perpetrators behind this dastardly crime until every killer is brought to justice and put behind bars.”

“The law will give them no mercy,” the official said.

Meanwhile, Panelo said the spate of bombings in Mindanao will not affect the voter turnout for the second part of the plebiscite on the Bangsamoro Organic Law on February 6.

The Malacañang official also dismissed the possibility of expanding martial law to other parts of the country.

Mindanao has been under military rule since the Marawi siege in May 2017. (SunStar Philippines)