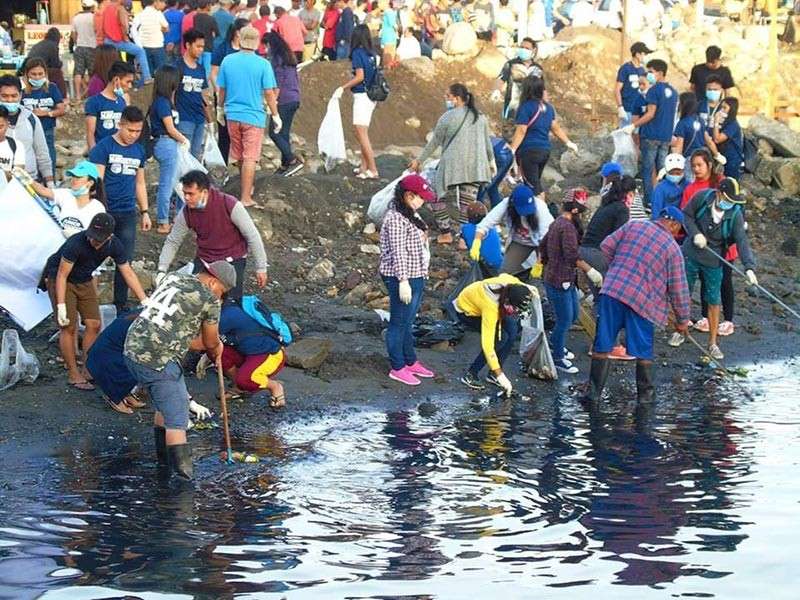 TACLOBAN CITY. People from all walks of life joined the massive cleanup drive along the riverbanks and coastal areas in Tacloban City on February 3. (Photo courtesy of Roel Amazona)

MORE than 700 volunteers from all walks of life showed up on Sunday, February 3, for a massive cleanup drive along the coastal and riverbank areas in Tacloban City.

“Time and again, it’s been proven that when people come together, we make things happen,” said Apple Alagon, a businesswoman and a Rotarian.

Alagon, who joined with other groups, student organizations, and government workers during the cleanup activity, added that “it’s an amazing feeling to be with people who care enough to take time and take part in the efforts of cleaning our coastal areas.”

She, however, said that there is a need for the city government to implement an ordinance in regulating the use of plastic.

“Educate the public. No matter how many cleanups we do, if we don’t take responsibility in disposing of our garbage, this will always be a problem,” said Alagon, who is the president of Rotary Club of Ormoc Bay.

Alagon hinted that Tacloban can follow the steps undertaken by the Ormoc City government on “No Plastic Day” during Wednesdays and Saturdays.

“It’s time we stand united to clean our city. Let’s be responsible in using single plastics too! Let’s reduce, reuse, and recycle,” Alagon wrote on her Facebook.

“But hopefully when the community and the city become educated, we will soon have a garbage-free Region,” she added.

Meanwhile, Councilor Aimee Grafil said that the city has a “pending ordinance” on “No Plastic Day.”

“I still have to call for a public hearing,” said Grafil of the Committee on Urban Poor and Human and Housing Resettlement, Committee on Environment and Waste Management, and Committee on Social Services.

“I will pass it for second and third reading,” Grafil told Sunstar Philippines.

Rhoel Ladera, a humanitarian and business leader in the city, also suggested to the public and city officials to turn the clean-up drive into “a regular activity for different groups whole year round rather than just a bigtime, one time or yearly coastal cleanup from few groups.”

While he was inspired to see the “remarkable changes and the positive outcome of the coastal cleanup,” he said that Tacloban residents should not lose the momentum in doing the activity.

Other groups who participated during the cleanup drive were from Tanauan, Carigara, and other neighboring towns in Tacloban.