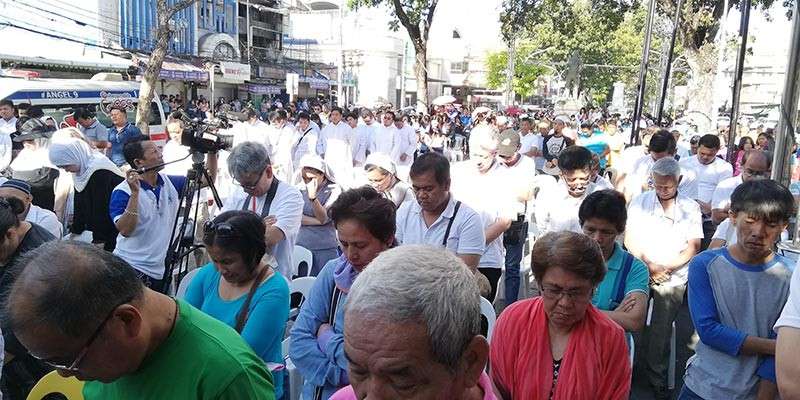 Hundreds of Kagayanon attend the interfaith prayer rally on Saturday to offer prayers for the victims of Jolo Cathedral bombing and the Zamboanga mosque bombing. (PJ Orias)

INTERFAITH groups gathered over the weekend to condemn the bombings in Jolo cathedral and Zamboanga mosque and offered prayers for the fallen.

Archbishop Antonio Ledesma of the Archdiocese of Cagayan de Oro reminds the people that the bombings are not a war against religions, but a political move in light of the Bangsamoro Organic Law (BOL).

Ledesma said the incidents should not be the reason to stop the peace process in this part of Mindanao.

Lawyer Alec Mohammad of the National Commission on Muslim Filipinos (NCMF) also condemned the "act of terrorism especially in places of worship".

"We must remember that any act against one citizen is an act of violence against the whole nation regardless of religion. They want to widen the gap between Muslims and Christians but this will not happen," he said.

Mohammad said the people should not allow hatred and discrimination to reign in their hearts.

The Interfaith Forum for Peace, Harmony and Solidarity, the group who initiated the gathering, meanwhile vowed to be an instrument for the unity of Muslims and Christians despite different religious beliefs.