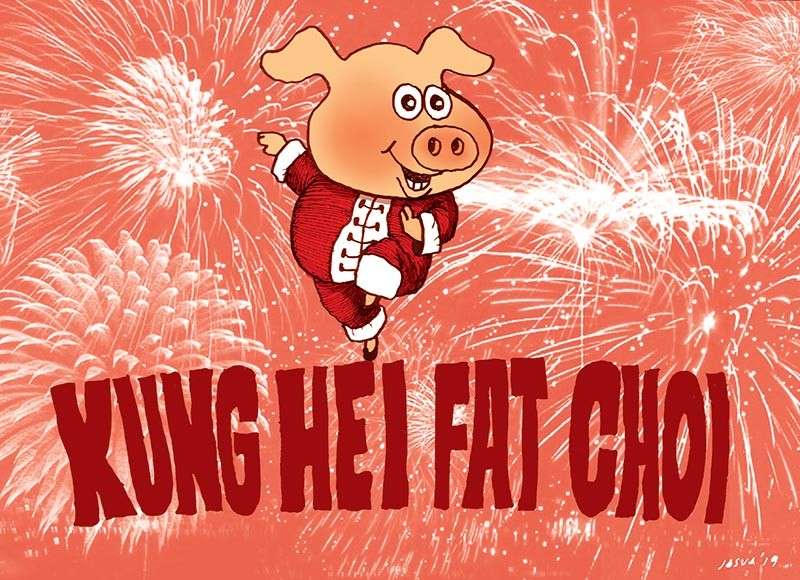 EVERY Cebuano need not look far to see how interwoven Chinese culture is to his own. On the dinner table—pansit, siomai, lumpia, fares neatly heaped around the grand lechon. There’s the steamy siopao bun, and you’re at once imagining yourself lacing it with generous ketchup and wolfing the thing in one gasp. There’s hopia, and you think of that brand preference that had it moist, with crunchy crust, stuffed either with ube or monggo. They come in boxes with labels you can’t even read.

These eats are so commonplace that you think their names were part of local lexicon. Except that they weren’t, we mean originally. Yes, your batchoy somewhat shored itself up through waves from across China at some point in the history of the archipelago and settled as a twin to Chinese commerce on Philippine soil.

That, by some stretch, somewhat explains today’s holiday. In reverence to the Chinese part of our soul, the one that today celebrates the springing of a New Lunar Year, a fresh cycle customarily welcomed by wild fireworks to scare away last year’s mythical monsters. In Chinese culture, the Spring Festival extends technically to 15 days, making it the longest festival of wining and dining in the traditional sense.

The Chinese New Year also inspires what could be one of the biggest migration traffic at a single time. In modern China, the young ones had to go home to the provinces to celebrate with their folks. An incredible 2015 statistics showed around 1,000 tickets sold every second in mainland China—literally a mad rush where people fight for tickets.

In Cebu though, we feel the feast mostly in commercial centers and in Chinese restaurants. There’s a handful of boys here and there doing the dragon dance, wishing fortune at the doors of business establishments. There’s the usual moon cake by the sidewalk. If you’re lucky, some Chinese elder would hand you the red packet, a symbolic passing on of supposed fortune.

There’s the Chinese zodiac to map out your stakes this year, and it’s Year of the Pig, it says.