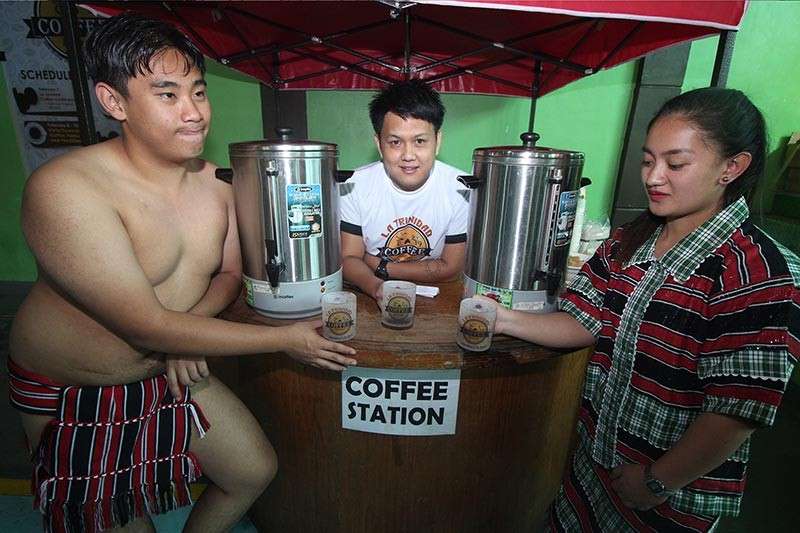 BAGUIO. La Trinidad tourism officer Valred Olsim join the youth garbed in traditional attire during the opening program of La Trinidad Coffee festival slated on February 7-10 with the theme "Brewing Unity through Coffee 2019.” The public is encouraged to bring their own mugs on February 9 for the unlimited coffee at the park. (Jean Nicole Cortes)

THERE is a significant growth of the coffee industry in Benguet’s capital town.

Before a law was passed establishing the La Trinidad Coffee Festival in 2015, some 4,500 coffee trees were reported in the valley with 17.268 metric tons produced.

Fast forward to December of 2018, the number of coffee trees grown in the valley has reached 70,722 while Benguet State University’s coffee plantation in Puguis has 20,000 trees.

Records from MAO revealed the town is producing 78.6738 metric tons production with an average of 1.1 kilograms per tree.

“Arabica production has an average range of 400 grams to one kilogram per tree. With proper management, it can reach up to 1.5 kilograms per tree,” added Ticbaen.

Robusta, Excelsa, Liberica and Arabica are among the coffee varieties commonly grown in the municipality.

La Trinidad’s coffee has a grade of 80, with the highest rating of 84.6 obtained during the latest Philippine Coffee Quality Competition in Baguio City.

In the coming five to 10 years, the town is eyeing its goal for the coffee industry.

“We hope that we will be able to increase our production for us to establish our own market including the international market,” Felicitas said.

At present, 40 percent are into backyard farming, 30 percent in coffee farms with an average 5,000 square meters while the remaining 30 percent remains to be developed for production.

“Our fear is the conversion of some of our agricultural areas to commercial,” she added.

However, the challenge remains in production for domestic and potential international market.

Coffee in Benguet province started during the Spanish Regime with coffee seeds given as payment to the workers during the presence of Spanish Trail that also leads to different municipalities.

Based on the updated coffee growers profiled within the 16 barangays, there are 71, 316 bearing trees grown in Barangays Shilan, Wangal and Puguis while 48,421 non-bearing trees are in Wangal, Shilan, and Beckel.