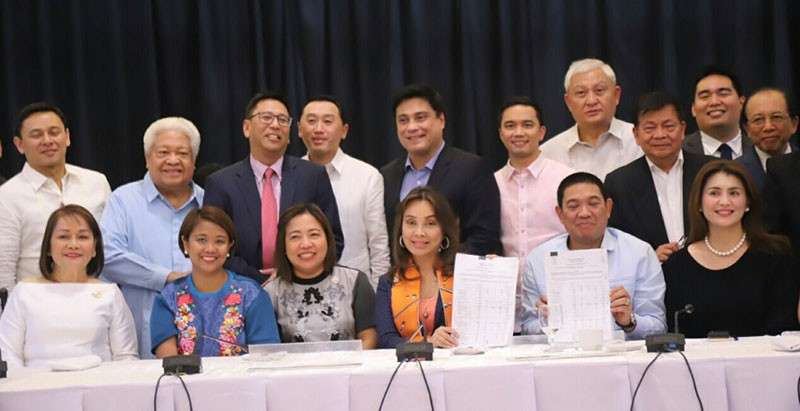 (UPDATED) - The Senate and House of Representatives ratified the bicameral conference committee report on the 2019 budget on Friday, February 8, their last day of session prior to a three-month break.

The 2019 General Appropriations Act is expected to take effect immediately and will not be cash-based, Camarines Sur Representative Rolando Andaya Jr. said.

He said, however, that they expect President Rodrigo Duterte to veto some provisions.

Andaya, chair of the House committee on appropriations, said in a press conference after they adjourned that itemized allocations under the final budget bill will be released in a few days, including the minimum of P160 million allocated to each member of the Congress.

He said the Senate and the House have agreed to delete the P75-billion insertion in the budget of the Department of Public Works and Highways (DPWH) for one simple reason - "the source of the project is questionable."

Although the DPWH budget was increased by P46 billion, Andaya said they made sure that the distribution of the budget is equitable as House Speaker Gloria Macapagal-Arroyo has emphasized.

"No district should be left behind. Walang ma-ze-zero dito (No district will get zero). Lahat ng distrito (All districts), regardless of how their representative voted, may makukuha (will get a share)," he said.

"Finally, we are proud to present a version of the budget that is pro-poor, pro-development, pro-inclusive and sustainable development, pro-Filipino," said Legarda, chair of the Senate committee on finance.

"The 2019 budget is a product of hard work and discernment," she added.

Approval of the P3.757-trillion national budget for 2019 has been delayed because of questions over alleged pork barrel insertions in the proposed budget submitted by the Department of Budget and Management (DBM).

The government has been operating on the reenacted P3.767-trillion budget.

Legarda said the amendments introduced by the senators, which were all institutional in nature, were adopted in the bicameral committee report.

She cited some of the amendments included in the report as follows: the restoration of the budget for health center facilities amounting to more than P21 billion; the increase in the allowances and hiring of more members of the Civilian Armed Forces Geographical Unit (Cafgu); the increase in the per capita MOOE (maintenance and other operating expenses) for the Philippine National Police; and additional allowance for teachers amounting to P800 million. (MVI/SunStar Philippines)