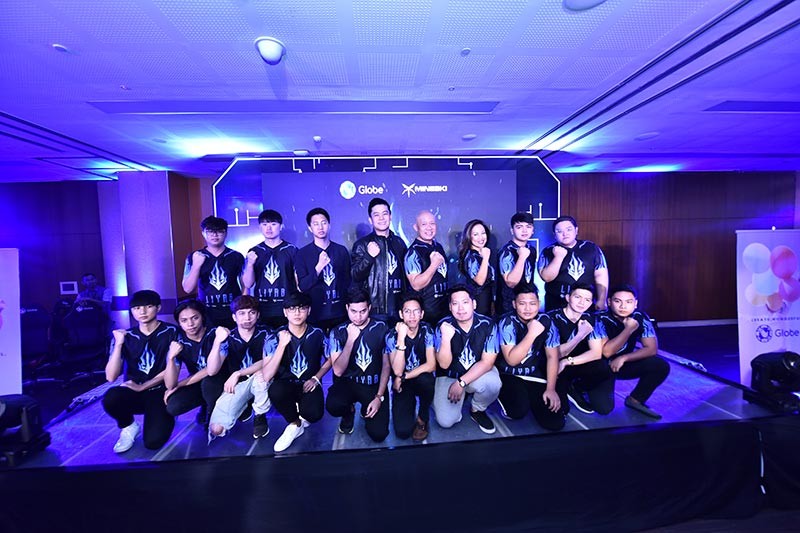 Globe Telecom, in partnership with Mineski, made the next big move in the competitive eSports arena by launching a professional eSports team called “Liyab,” which will be debuting with teams from world-renowned eSports titles - League of Legends, Hearthstone, and the 30th Southeast Asian Games (SEA) new medal game, Arena of Valor. Leading the launch were Globe President & CEO Ernest Cu, Mineski CEO and president Ronald Robins and Globe vice president for content partnerships, Jil Go. Also introduced were the players of Team Liyab consisting of 13 members, each with their own specialties in various prestigious eSports competitions. (Contributed photo)

GLOBE Telecom, in partnership with Mineski, made the next big move in the competitive eSports arena by unveiling a professional eSports team called “Liyab,” which will be debuting with teams from world-renowned eSports titles, League of Legends and Hearthstone; as well as the 30th Southeast Asian Games (SEA) new medal game, Arena of Valor.

Globe president and chief executive officer (CEO) Ernest Cu said the creation of a professional eSports team is part of the company’s vision through the Globe Games and eSports program to accelerate the development of eSports in Philippines.

“Liyab will be the symbol of the country’s burning passion and pride in global eSports events,” Cu said. “Liyab, which translates to ‘Blaze,’ represents the team’s intense passion and focus in the realm of eSports.”

Through its partnership with Mineski, the eSports pioneer and authority in the Philippines, Globe is committed to further strengthening the country’s eSports program and solidifying the Philippines’ position alongside the established eSports giants in the region.

Mineski CEO and president Ronald Robins believes that eSports is now at a stage whereby new roles are being filled in to assure the constant growth and progress of the athletes. Liyab will establish a professional sports team management system by introducing sports science, mental and physical programs, as well as proper training facilities – moving away from playing houses. “With the proper management system, we strongly believe we can overcome the hurdles and set an example for many to follow suit as well so to make each country competitive with each game and also to promote a stronger region overall,” said Robins.

Since its launch in April 2018, the Globe Games and Esports Program is at the forefront of the Philippine eSports landscape by organizing and hosting international eSports tournaments such as the Globe Philippine Pro Gaming League, Globe Conquerors Manila, and Valor Cup.

Globe SVP for Content Business Nikko Acosta revealed that Globe Games and Esports Program has been leading the development of the industry by setting the trend in all gaming access such as mobile, PC and consoles.

“With the birth of Liyab Esports Team, we will be disrupting eSports and games much like how we changed the digital lifestyle and entertainment in the Philippines,” Acosta said. “The Philippines will finally have a systematic and professionalized program for eSports.”

This is in line with the major development last quarter when it was announced by the Philippine SEA Games Organizing Committee (PHISGOC) that eSports will be officially included in the calendar of games for the upcoming 30th Southeast Asian Games, which will be held in the Philippines from November 30 to December 11, 2019.

Cu also said that Liyab will play a major role on how Globe would redefine the gaming and eSports habits of Filipinos by expanding its #PlayItRight advocacy into gaming responsibility.

“We are now positioning gaming and eSports like a real sport for Filipino gamers to follow. By focusing on the total development of the eSports athlete such as Physical Wellness, Nutrition, Discipline and Cognitive Development, this provides gamers an avenue to progress to a professional level,” Cu said.

Team Liyab is composed of the country’s most promising gamers who shall set the eSports arena ablaze with their skills, demeanor, discipline and competitiveness through hard-nosed, no-nonsense training.

Robins said that Mineski will help shape the local gaming industry by creating professional standards for eSports athlete development, influence attitudes, personalities and aspirations of the next generation of gamers.

Accomplishments of the Liyab team members include representing Southeast Asia together with the Malaysian and Thai teams in the 2018 League of Legends Rift Rivals against Japan and Oceania regions. They also represented the Philippines in the Globe Conquerors Manila, the most prestigious League of Legends eSports event in Southeast Asia for 2018. Liyab Arena of Valor division, on the other hand, has been a constant in all Arena of Valor Valor Cup regional tournaments in 2018 eventually taking home the championship title in the Globe Philippine Pro Gaming League (PPGL) Season 3 - Arena of Valor. Finally, Liyab Hearthstone division player Cara Cute has been a constant contender in the Hearthstone eSports scene and ended 2018 strong with a top four placement in the World Electronic Sports Games (WESG) SEA. (PR)