Real Property Tax payments will only be accepted at Galleria 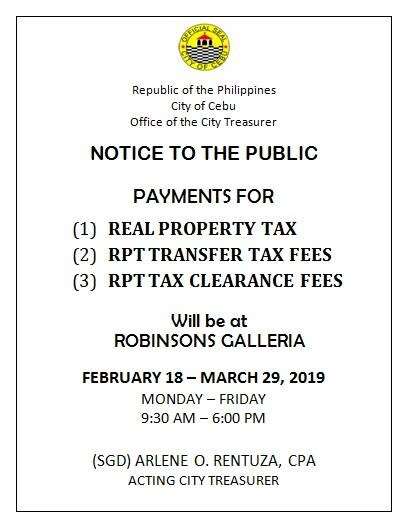 Notice to the Public

STARTING February 18, all transactions regarding the payment of real property tax (RPT) will be done at Robinsons Galleria Cebu.

Acting City Treasurer Arlene Rentuza said that for this year, they expect to collect P1 billion taxes from real properties.

Rentuza said from February 18 to April 2, the City Treasurer’s Office (CTO) will be receiving payments related to RPT in Robinsons Galleria Cebu only.

No transactions will be entertained at City Hall.

“We really have a limited space here in City Hall and more taxpayers are paying their dues. We also anticipate that by March 31, which is the deadline for the payment of the first quarter, more people will troop so we prepared a place where taxpayers can pay comfortably,” she said.

Aside from RPT, payments for RPT transfer tax and RPT tax clearance will also be accepted at Robinsons Galleria.

Rentuza said it is the first time that the City is accepting payments outside City Hall, which is similar to the process of paying the business tax.

“Our real properties are increasing because there are several condominiums in the city that are already transferred to individual owners,” she said.