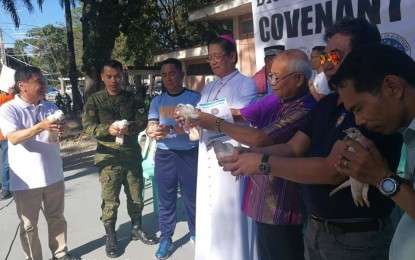 LEADERS of different churches and civil society groups in Dumaguete City on Tuesday afternoon, February 12, urged political candidates to shun violence and not to engage in vote-buying while also reminding the public to make wise choices and not sell their votes.

The call was sounded during the program that preceded an interfaith prayer and covenant signing for the holding of Clean, Honest, Accurate, Meaningful, and Peaceful (Champ) elections on May 13, spearheaded by the Diocesan Electoral Board (DEB) of the Diocese of Dumaguete.

Candidates for different elective positions, including governor, vice governor, board members, mayors and councilors, braved the mid-afternoon sun to join the activities, which started out with a unity walk around the city’s main streets to Quezon Park.

Commission on Elections (Comelec) officials, personnel from the Philippine National Police (PNP), the Philippine Army, Philippine Coast Guard, and students of different colleges and universities also joined the activities, bearing placards that called for clean, peaceful, and orderly polls, as well as campaigning against vote-buying.

Senior Superintendent Raul Tacaca, provincial police director, gave the assurance that the PNP remains neutral during the election and will carry out their mandate in securing the polling precincts and other areas of interest, especially on election day.

He called on political candidates not to sow terror, engage in violent activities, and threats to earn votes.

Tacaca reassured the voters and candidates that they will be protected, as he called for clean, peaceful, and orderly elections not just now but even in the future.

Addressing the crowd of about 1,000 at the Quezon Park, he noted that the huge turnout of candidates coming to support the Champ polls and signing the “integrity pledge” is an indication that people in the city are peace-loving.

The Comelec official also pointed out if nobody would buy votes, no one would sell them.

On credible election results, he reassured that no cheating can be done in an automated election and the Comelec has not experienced it.

Dumaguete Bishop Julito Cortes, who sits as honorary chair of the DEB, emphasized that the signatures on the covenant “are not just scribbling on paper but (are) etched in our hearts and mind, not just for today, not just for display but it is sacred.”

The message of peace, honesty, and sincerity for the coming mid-term election was shared by Bishop Cortes’ counterparts from the Iglesia Filipina Independiente, the United Church of Christ in the Philippines, and the Muslim community, who also gave their individual prayers and blessings during the covenant signing.

Cortes also gave the candidates something to seriously think about: the LASER test, which stands for Lifestyle, Action, Supporters, Election Conduct, and Reputation.

These are parameters being suggested to the voters to consider when choosing their national and local leaders, he said.

Cortes led the releasing of doves as a symbol of peace, while DEB lead convenor Msgr. Julius Heruela led the candle lighting activity.

The candidates raised their hands during the reading of their integrity pledge before Comelec provincial supervisor Labaria, and signed the peace covenant afterwards. (PNA)