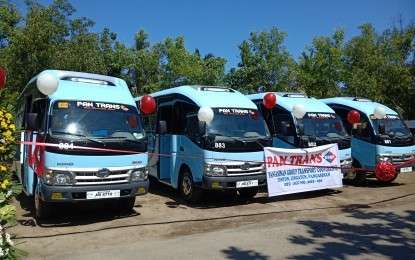 PANGASINAN. The modern jeepneys manufactured by the Mhel Bhen Motors in Pangasinan will soon be operated in Dagupan City by the Pangasinan Group Transport Cooperative. (Photo by Hilda Austria)

FOUR modern jeepney units will start to operate in the downtown loop of Dagupan City soon after the Pangasinan Group Transport Cooperative has obtained provisional authority from the Land Transportation Franchising and Regulatory Board (LTFRB).

The modern jeepneys’ body parts were manufactured by Mhel Bhen Motors, a company based in Pangasinan, while the engines were made of Japanese brand Hino.

“These are affordable and are equipped with global positioning system, Wi-Fi, along with closed-circuit television cameras, while the quality of the engine is assured since it is a Japanese brand. It is also environment-friendly since its engine is Euro 4,” he said in an interview on Tuesday, February 12.

Navarro said these are expected to operate within the downtown loop of Dagupan City anytime soon.

He noted they have taken the initiative to build the modern jeepneys as this is necessary to keep the jeepney modernization program rolling.

“The return of investment may take years but this is already needed, and the government provided means to acquire funding through the banks with low interest,” he added.

The provisional authority for the modern jeepney units were personally awarded by LTFRB chairman Martin Delgra III during the Transportation Summit which was attended by transport groups and operators in the entire Ilocos Region in Lingayen, Pangasinan on Tuesday.

Delgra reiterated to the operators and drivers present in the event the components and benefits of the jeepney modernization program.

“We will become progressive only if we serve our commuters. If their needs will be met, then even you will become rich,” he said, citing a transport group in Tacloban earning P300,000 a month following the modernization as an example.

Delgra noted the modernization has three components such as new units, consolidation of existing routes, and management through a cooperative or corporation.

“We will be bringing hundreds of millions (of pesos) to the economy,” he added.

The LTFRB chair also explained that the government will aid the transport cooperatives in the cost of modernization with P80,000 per unit and tax exemption, aside from the lower interest and equity from the banks.

He, however, clarified “it is not just about the cost, it is about a system that is efficient, predictable, safe and convenient transportation.” (PNA)