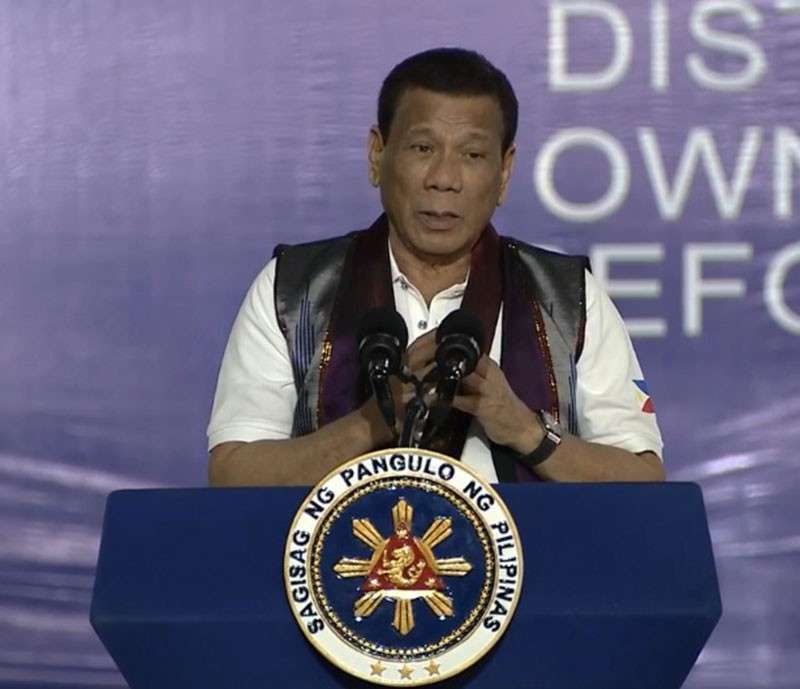 NUEVA ECIJA - Unfazed by criticisms hurled against his brutal crackdown on illegal drugs, President Rodrigo Duterte taunted Wednesday, February 13, the human rights groups by daring them to "call God to intervene" if they are opposed to his policy.

In a speech delivered here in Laur, Nueva Ecija, the President maintained that he would not lift his "kill" order against drug offenders in the country.

"If you destroy my country, I will kill you. Human rights? Fine. You can shout to the heavens. You can call God and (ask Him to) intervene," Duterte said during the inauguration of the Moscati Meadows Residential Treatment Facility here in Laur, Nueva Ecija.

"But if you continue to sell shabu, cocaine and the drugs that are toxic and cause death to the Filipino, I will kill you," he added.

Duterte issued the remark as he lauded the establishment of Moscato Meadows, a one-hectare residential addiction treatment center that can accommodate up to 50 patients for a six-month holistic rehabilitation program.

He said the residential treatment facility was "truly in line with this administration’s efforts to combat the drug menace that has plagued our society for so long."

"I acknowledge the efforts of the management and staff of Moscati Meadows for successfully launching this facility which will serve as a haven for those who have been victims of drug abuse. I am truly glad that through this center, you will help them recover and find their way back to society," he said.

"By complementing traditional rehabilitation treatment with non-medical treatment methods such as group and individual therapy sessions, meditation, and horticulture and farm animal therapy, you will not just provide holistic care to your patients, but will also empower them to become effective drug and [alcohol] counselors to their peers who suffer the same predicament," he added.

The President lamented that some three million Filipinos remain "slaves" to illegal drugs.

Duterte said he was ready to stamp out the rampant narcotics trade, stressing that he already directed the state forces to "meet the challenge" of going after drug personalities.

"Three million addicts is no joke to me. I can cut you to pieces a thousand times. I hate drugs because you do not f*** with my country," Duterte said.

"Pumapasok silang lahat. Ngayon, gusto nilang subukan, sige. We are prepared. My soldiers and my police. We are ready to meet the challenge. At sinabi ko sa kanila, tapusin na natin ‘to habang ako pa," he added.

(Many are trying to be involved in illegal drugs. Now, they want to try. Fine. We are prepared. My soldiers and my police. We are ready to meet the challenge. And I told them, finish this during my watch.) (SunStar Philippines)