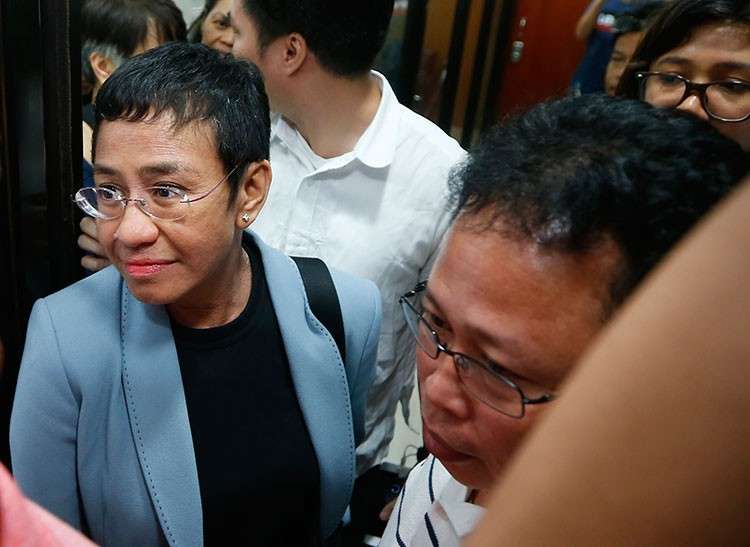 MANILA. Maria Ressa, the award-winning head of a Philippine online news site Rappler that has aggressively covered President Rodrigo Duterte's policies, is escorted into another room following her arrest by National Bureau of Investigation agents in a libel case Wednesday, February 13, 2019. (AP)

BUSINESSMAN Wilfredo Keng, whose complaint led to the filing of cyber libel charges against online news platform Rappler and its CEO Maria Ressa, said Thursday, February 14, that he is committed to pursue the case “to the very end” in order to clear his name and inspire all other “victims of cyber libel and cyber bullying to stand up.”

He said the case is a “test case on how the Philippine legal and judicial system will fare against the dangerous precedent that is being set by one reckless and irresponsible member of the media and of the online community.”

Keng filed a complaint against Rappler Inc., Ressa and researcher Reynaldo Santos Jr. in 2017 over a news article that said he loaned a vehicle to former Chief Justice Renato Corona.

The article was posted online in May 2012, a few months before the Philippines enacted a cyber libel law. The Cybercrime Prevention Act of 2012, or Republic Act 10175, was approved on September 12, 2012.

Keng filed his complaint five years later. He said the Department of Justice recommended the filing of charges after a “lengthy, careful and meticulous investigation”.

Ressa posted bail mid-morning Thursday, February 14, after spending a night in the custody of the NBI.

In a statement issued through his lawyer, Keng said Rappler tried to mislead the public by claiming that the complaint he filed was dismissed by the NBI.

“Rappler’s inaccurate, nay reckless, reports and statements continue to be quoted by other news outfits, thereby perpetuating the clearly incorrect version of the said story. Such reckless, premature and inaccurate reporting on official government processes reek of actual malice and cyber bullying and border on the intentional propagation of ‘fake news’,” Keng said.

Below is his statement in full.

Of the many virtues guarded by democratic nations, justice and protection against libelous speech may well be the most difficult to attain. Apart from the unfortunate reality that necessary legal machinery may be inaccessible to many, technology and modernity have so drastically changed the information highway such that information-sharing has become virtually and instantaneously boundless – both global in reach and perpetual in duration.

It is for this reason that now, more than ever, democratic freedoms such as those of speech and of the press must all the more be vigilantly balanced against the standards of responsible exercise and accountability, as well as the dictates of conscience, justice and the truth, lest they serve to oppress rather than liberate the citizens whose lives they are meant to enhance.

It is for this same reason that I am deeply grateful that after the conduct of a lengthy, careful and meticulous investigation, the Department of Justice has categorically resolved to criminally charge Rappler, Inc., Maria Angelita Ressa and Reynaldo Santos, Jr. with cyber libel in court because of their publication of clearly defamatory statements against me through their online news platform, the penalty for which crime is imprisonment for a minimum of four years, two months and one day to a maximum of eight years.

While I am aware that this vindication is but the start of what may be a long and arduous process, I am committed to see this legal battle to the very end. Upon seeing the libelous article and prior to resorting to judicial remedies, I tried to formally and informally communicate with Rappler in order to have the said article taken down, clear my name and restore my reputation, at least, to the extent possible given the fact that irreparable damage had already been done, multiplied a million-fold because Rappler’s website continues to be accessible by the whole world. In turn, Rappler, likewise through formal and informal channels, repeatedly promised me that they will take down the subject article, but never did. The libelous attacks remain posted on their website until now.

Rappler, Ressa and Santos never attempted to obtain my side on the crimes they wrongly imputed to me or to fact-check their baseless attacks against my name. I have never had a criminal record. For almost four decades since I started working, I have consistently secured official clearance from the National Bureau of Investigation certifying that I have never been involved in any criminal case and have never had any criminal history. Since the 1980’s, I have never been investigated by or summoned before any law enforcement agency in connection with any alleged criminal act, much less have I been indicted, arrested, detained or convicted of any crime in the Philippines. Further, the National Bureau of Investigation, as the central repository and chief administrator of the country’s criminal history records, would never have found in my favor and filed the complaint against Rappler, along with its concerned officers and reporter, for cyber libel concerning defamatory imputation of crime if had any criminal record or history in their files.

Against this kind of limitless harassment and wanton disregard for the rule of law, I was left with no other choice but to file a case and seek protection from our courts. To date, the perpetrators have not once denied having published clear defamations against me but simply continue to hide behind a single claim: that unfortunately for me, I allegedly can no longer complain.

Rappler, Ressa and Santos continue to hold themselves high above any accountability to provide credible and justifiable reason for why they continue to harass an ordinary private citizen and businessman despite having absolutely no basis for their claims. What is their motive? With one click of a button, they destroyed my reputation and endangered my life.

They attempt to mislead the public by releasing “news” that my complaint against them was purportedly “dismissed” by the National Bureau of Investigation, knowing absolutely well that it is the National Bureau of Investigation itself which filed the complaint for cyber libel against Rappler, Ressa, Santos and other named individuals before the Department of Justice. Rappler’s inaccurate, nay reckless, reports and statements continue to be quoted by other news outfits, thereby perpetuating the clearly incorrect version of the said story. Such reckless, premature and inaccurate reporting on official government processes reek of actual malice and cyber bullying and border on the intentional propagation of “fake news”.

It is thus high time that we remember that the foundation of our independence, democracy and freedom is based on one simple truth: no one is above the law. As I pursue this case to its just conclusion, I pray that the dispensation of justice be lawful and swift in recognition of the global platform of the perpetrators, the length of time the libelous statements against me have remained available for the entire world to see, and other factors which exponentially threaten my life, limb, property, health, well-being and peace of mind. I further hope to not just seek remedy and redress for myself and my family, but to move all other victims of cyber libel and cyber bullying to stand up and seek just and legal action.

In the end, this story is not just about an ordinary suit filed by a private and hardworking citizen to clear his name. It is, in reality, a test case on the how the Philippine legal and judicial system will fare against the dangerous precedent that is being set by one reckless and irresponsible member of the media and of the online community. If left unaccountable, Rappler, Ressa and Santos’ example of impunity will be emulated and replicated, and will destroy not just individual lives but our entire country.

May Justice and Truth continue to be on our side. (MVI/SunStar Philippines)