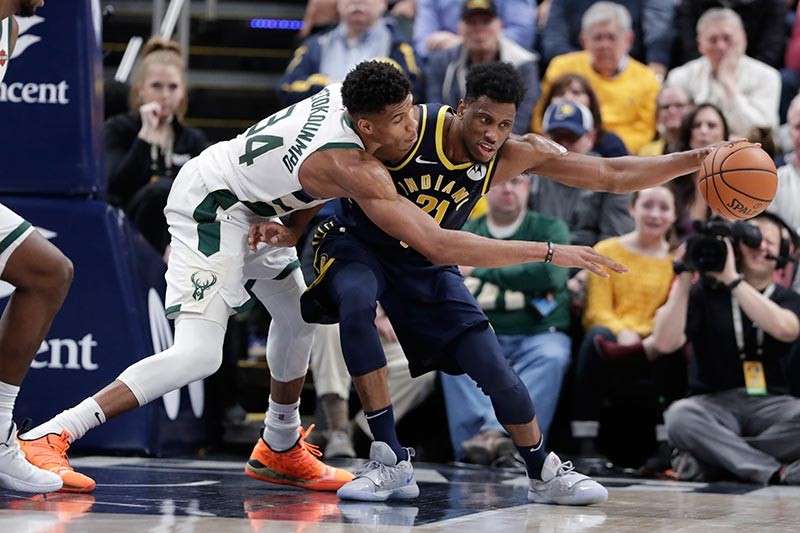 THE Milwaukee Bucks stuns the Indiana Pacers with win in their home court in Bankers Life Fieldhouse in Indiana.

The Pacers couldn’t withstand the firepower of the Bucks and ended up losing to a score of 106-97. In process, the Bucks took down the Pacers’ six-game winning streak.

The Bucks was led by the Greek Freak himself, Giannis Antetokounmpo, who posted a triple double of 33 points, 19 rebounds, and 11 assists.

Moreover, 4 Bucks players were scoring in double digits starting with guard Malcolm Brogdon who scored 17, guard Kris Middleton with 15, veteran guard George Hill with 12, and forward Ersan Ilyasova with 11 to add to the win column.

Meanwhile, the Pacers relied on their European forward Bogdan Bogdanovic who posted 20 points, followed by guard Nick Collison and forward Domantas Sabonis who scored 14 each. In addition, center Myles Turner scored 11 in this game and guard Tyreke Evans scored 10. The Pacers played without their star shooting guard Victor Oladipo who suffered a devastating knee injury a month ago against the Raptors and will be missing the remainder of the 2018-2019 season.

The first quarter was all about the “Greek Freak show” as Antetokounmpo breezed against the defense of the Pacers, finishing the quarter with 26-18 advantage against the Pacers. Antetokounmpo scored his first 13 points in the first quarter alone. In the second quarter, the Pacers seem to have been rejuvenated and tried to quell the hot start of the Bucks, both teams scoring a total of 29 points going into halftime. However, the Bucks still managed to hold on to the lead with the score of 55-47 in the half.

In the third quarter, the Pacers took advantage of the Bucks’ slow start to the quarter and advanced to close the gap with 79-76 heading into the fourth. However, the Bucks shook off their poor performance at the third and went on a shooting spree in the fourth to take the win. After Pacers forward Thaddeus Young scored a three to take the lead for the Pacers with the score of 95-93 and with under five minutes left, the Bucks came back with an 11-0 run, ultimately sealing the deal against the home team.

In this game, Antetokounmpo has shown to be a candidate for the most valuable player as he was a man in a mission to defend everything against the Pacers. This was a monstrous performance set by the Greek Freak as he provided everything for the Bucks.

The Bucks are now going into All-Star weekend as the most dominant team in the Easter Conference with a record of 43-14 while the Pacers still has a chance to reach the playoffs due to their record of 38-20 in the season. (Jayvee Gulfan, USC intern)