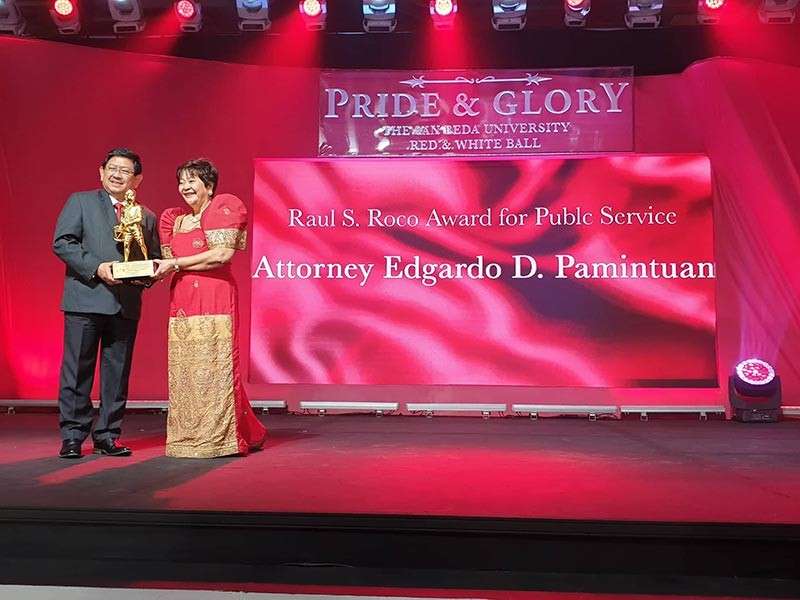 Pamintuan, an alumnus of the San Beda College of Law and a multi-awarded local chief executive, received the award during the Red and White Ball spearheaded by the San Beda Alumni Association.

“I would like to dedicate this award to my fellow public servants, to our hardworking government employees, to the private sector who have been working tirelessly with us, and of course, to my beloved Angeleños. Without their support, we could not have attained a progressive Angeles City today,” said Pamintuan.

“At the same time, the accolade is a timely fete as I am on the last few months of my term. This is a wonderful recognition as I end my years of public service in the local government. It also serves as an evaluation of my performance as it manifests how stern and committed we are in delivering what we promised,” the mayor added.

The award was named after the late senator Raul Roco to honor the principles and ideals that distinguished his life and the meritorious service he carried out for the Filipinos. Over the years, the body honors Bedans who predominated in the field of public service as manifested by their leadership, programs, and projects that emanated in a compelling and significant change and progress in the life of their constituents in particular, and or for the Filipino people in general.

Pamintuan is known for his battlecry “Agyu Tamu” which reflects the resilient and triumphant spirit of the Angeleños during the onslaught of Mt. Pinatubo eruption in 1991.

When he came back as mayor in 2010, Pamintuan introduced the many firsts in the city in terms of public service and government programs. Under his term, he established the City College of Angeles (CCA) which extends free and quality college education to the youth of Angeles City.

He also kicked off the modernization of the Ospital ning Angeles (ONA) with the establishment of the Renal Care Unit which is the first LGU-run dialysis center in the country, and the building of the P50-million hospital annex housing the chemotherapy infusion unit, and the intensive cardiac care unit.

Pamintuan also launched the full operation of the state-of-the-art Angeles City Agyu Tamu Emergency and Disaster Command Center which is the first in the province, if not the region. Angeleños are now assured of a good resting place as the city established its own public memorial park under the leadership of Pamintuan.

To safeguard the culture, the arts, and heritage legacies of the city, Pamintuan launched the Urban Renewal Program which aimed at protecting the centuries-old edifices of Angeles City making it as a prime heritage and entertainment tourism destination in the region.

Aside from being the father of the city, Pamintuan also served numerous positions in the national government. In 2001, he seated as the general manager of the National Housing Authority, presidential adviser of former President Gloria Macapagal Arroyo for external affairs in 2004, chairperson of the Subic-Clark Alliance for Development in 2006, chief executive officer of the North Luzon Railways Corporation in 2008, and adviser of the Government Peace Panel in 2017.

Pamintuan was also named as the Top 8 World Mayor in 2012, and five-time Superbrands Most Outstanding Mayor of the Philippines from 2012-2017.