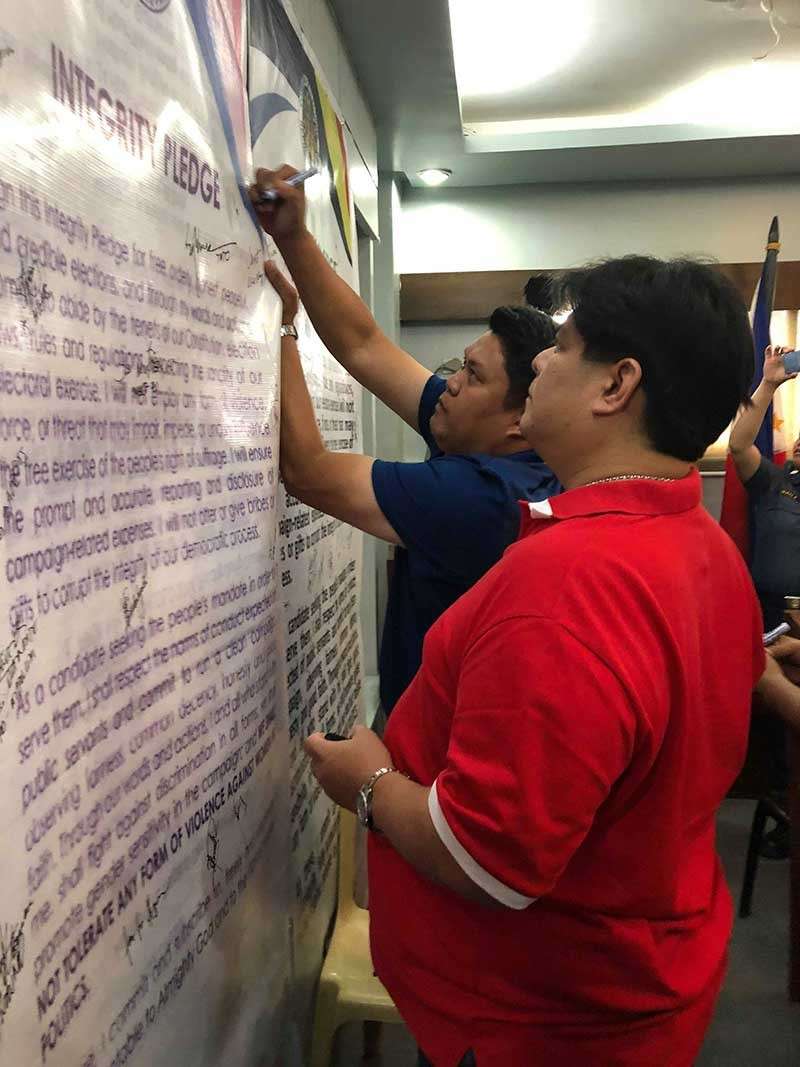 POLITICAL candidates in E.B. Magalona town in Negros Occidental signed an integrity pledge during the peace covenant signing held at the Negros Occidental Police Provincial Office (Nocppo) headquarters in Bacolod City Thursday, February 14, to affirm that the town is peaceful.

The signing was held since the candidates were absent in the previous signing held at the provincial capitol grounds last month due to their busy schedules at that time.

Malacon said it was the second peace covenant signing they all participated.

This is not about politics, but the willingness to serve for the same position, he added.

After this election, we can move on, whoever wins, he said.

Malacon said there is no incident which can be used as a basis for the town to be considered as an election hotspot, based on the record of the police.

For his part, Lacson, who also previously served the town as mayor, said it is their way to affirm that there is no chaos in the town.

Lamonte said the town is not at all peaceful because there were reports on “vote or gabot."

It is a way of intimidating the people to vote for a certain candidate, instead of choosing his personal choice, he said.

He urged the Comelec to disqualify a candidate who is proven to have committed a violation.

As this developed, Baleros, in his message, said the presence of the candidates is a gesture of showing their commitment to have orderly and peaceful elections.

This will serve as an inspiration to political leaders and their supporters to maintain calm and tranquil. Votes are counted without force and intimidation, he added.

A clear manifestation that guns and goons are not essential components to attain victory, Baleros said.

Politicians should stay true to their commitment to serve the people, he said. “Politics is just for one day. Let us accept the decision of your constituents and utilize the resources wisely whoever wins.”

Meanwhile, Pasaporte said they will be continuously doing their mandate against armed men to maintain peace and order in the province.

Pasaporte said the move of the candidates was to show that negative reports in the town are not true.

In fact, the candidates are very cooperative, he added.

E.B. Magalona was among the five areas which are being monitored by the police due to intense political rivalry and presence of armed men.

The Police Regional Office (PRO)-Western Visayas in Iloilo City has identified 28 out of 46 areas in Western Visayas as areas of concern. However, such areas are subject to change.

The Philippine National Police (PNP) has also identified six areas in the region, but no names were mentioned as of this writing.

Meanwhile, Villanueva said the Comelec has not come up with an official list identifying elections hotspots in the province.

Everything is vetted and validated constantly, she added.

It will remain fluid, depending on the situation, even if there is a list, she said.