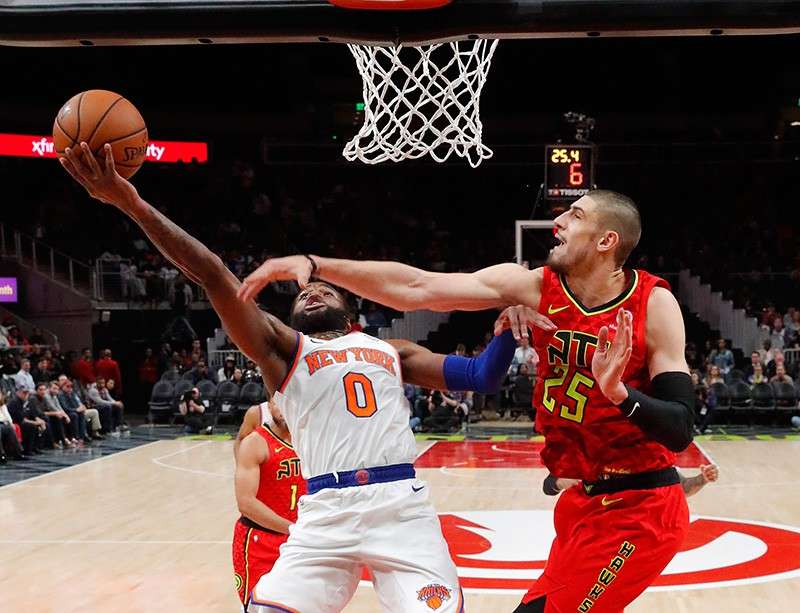 GEORGIA. New York Knicks guard Kadeem Allen (0) gos in for a basket as Atlanta Hawks center Alex Len (25) defends during the first half of an NBA basketball game Thursday, February 14, 2019, in Atlanta. (AP)

THE New York Knicks silenced the home crowd as they defeat the Atlanta Hawks with the score 106-91 at Philips Arena in Atlanta, Georgia.

At present, both teams are at the bottom of their respective conferences and wanted to get a win going into All-Star weekend. However, it was the Knicks that came out on top and broke their 18-game losing streak.

Newly-acquired guard Dennis Smith Jr. was the leading scorer for the Knicks this game as he posted 19 points. In addition, five Knicks players also acquired a double-digit score in this game with guards John Jenkins and Kareem Allen scoring 14 points, guard Damyean Dotson with 13, center Deandre Jordan with 10 points and 13 boards, and forward Luke Kornet with 11 points.

Meanwhile, for the Hawks, they relied on center Dewayne Dedmon’s 21 points down low along with rookie guard Trey Young and forward Kent Bazemore with 16 each, and forward Taurean Prince with 10.

This was a messy night for both teams, especially the Hawks, since they couldn’t find a decent offensive run in the game. In the first quarter, New York scored the first 14 points and the Hawks missed 11 shot attempts in the early minutes of the quarter. Only Hawks center John Collins was able to break the cold streak and allowed the Hawks to be on the board.

However, the struggles worsened as the Hawks only managed to score five points seven minutes into the quarter. This allowed the Knicks to have a 15-point lead against the home team. In the end, the score was 28-13, the Hawks’ lowest scoring point in a quarter this season with 6-29 from the field and 0-9 in three-point land.

In the second quarter, the Hawks managed to wake up and started cutting the 17-point lead of the Knicks. The Hawks catapulted into a 12-2 run that allowed the score to be close at 54-51 into halftime.

In the last quarter, the Hawks were unable to build enough offensive runs to gain the lead in the game. Thus, the Knicks ended with a 15-point lead to close the game 106-91. (Jayvee Gulfan, USC intern)