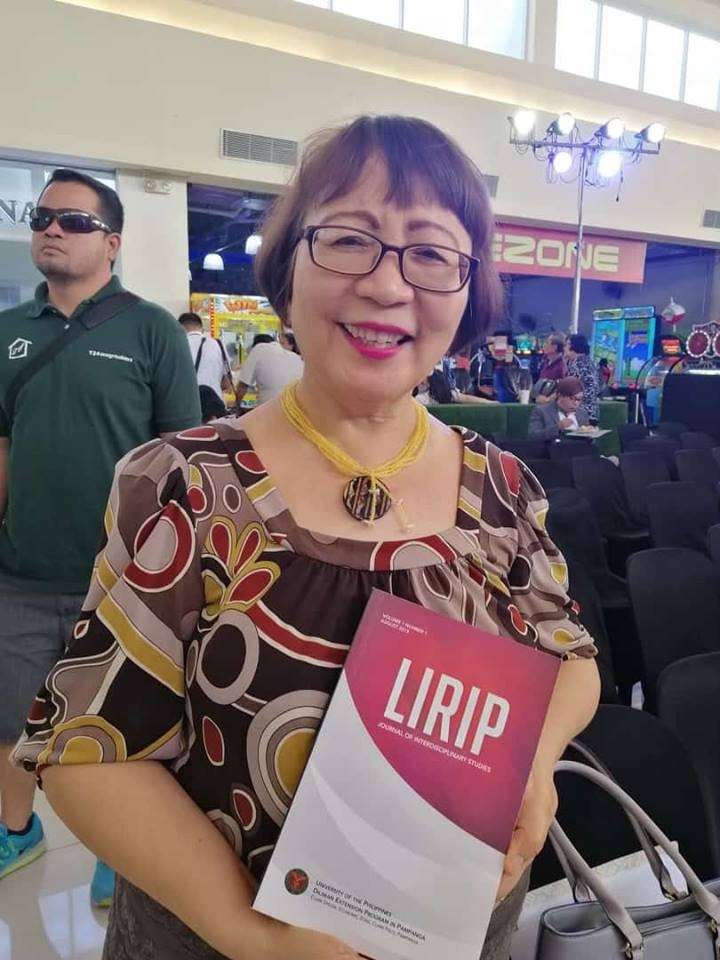 PAMPANGA. Dr. Juliet Mallari shows a copy of 'Lirip' during the kick-off of the National Arts Month celebration held at Vista Mall in the City of San Fernando. (Nicole Renee David)

CITY OF SAN FERNANDO -- The City Government of San Fernando through its City Tourism Office in partnership with the National Commission for Culture and the Arts (NCCA), and San Fernando Arts and Culture Council over the weekend launched this year’s National Arts Month celebration in grand rites at Vista Mall here.

NCCA Director and Lirip: Journal of Interdisciplinary Studies Editor-in-Chief Dr. Juliet Mallari said that food writing is the emphasis for this year’s celebration.

"I belong to the Literary Arts Committee. Food writing is the emphasis for this year. That is why we coined the term 'Namnamin' from the acronym of National Arts Month (NAM) and ‘to savor’ for the theme. We are inviting everyone to join us because this is just only for this year. We also have performances related to food. We have songs, films, dances. Everything about food. Topics are all about food. On the 25th, we have sessions in the afternoon with Miss Feliz, a known food writer. On the second day we have the cooking demo of Lillian Borromeo. The third day will be a cooking demo and food trip to Angeles City with Chef Sau Del Rosario,” she said.

“Those [Lirip] are academic papers, but it just happened that we're launching National Arts Month that's why we have it here. But my main concern here is 'Namnamin', the theme of the National Arts Month which is a project of the National Commission for Culture and the Arts. It's here in Pampanga because the theme is food and art. It's really meant for the Kapampangans, those who are good in cooking, and we want to showcase our delicacies also, food really so Namnamin is going to be held at the Orchids Garden,” she said.

“We're going to display the food. We will have cooking demos as well. And of course we will have on the first day National Artist Virgilio Almario giving the keynote address. We will also have several sessions, discussions in food writing and then we will also have chefs to talk about their culinary expertise like Claude Tayag who is both a chef and a painter. It's just right for the celebration of National Arts Month," Mallari added.

She said that “Namnamin” aims to spread art appreciation particularly in Pampanga as Kapampangans are very artistic.

Meanwhile, the books Ding Mikakapatad (The Siblings) authored by City Tourism Officer Ching Pangilinan and her daughter Sunis Pangilinan Gonzales, and the University of the Philippines Diliman Extension Program in Clark, Pampanga’s Lirip: Journal of Interdisciplinary Studies were launched during the event.

The children’s book, Ding Mikakapatad, is a project for a cause which aims to distribute at least 500 books in public schools within and outside the City of San Fernando.

A ribbon cutting ceremony of the art exhibit which features the works of The Outstanding Fernandino Awards (TOFA) awardees in the field of arts and culture namely Benjamin Lingad, Rolando Quiambao, and Ernesto Quiwa was also held during the launching. The said exhibit will run until February 22.

The sub-committee of the NCCA, National Committee on Literary Arts, will highlight the annual “Ani ng Sining” which will be held on February 25 to 26 at the Orchids Garden here.