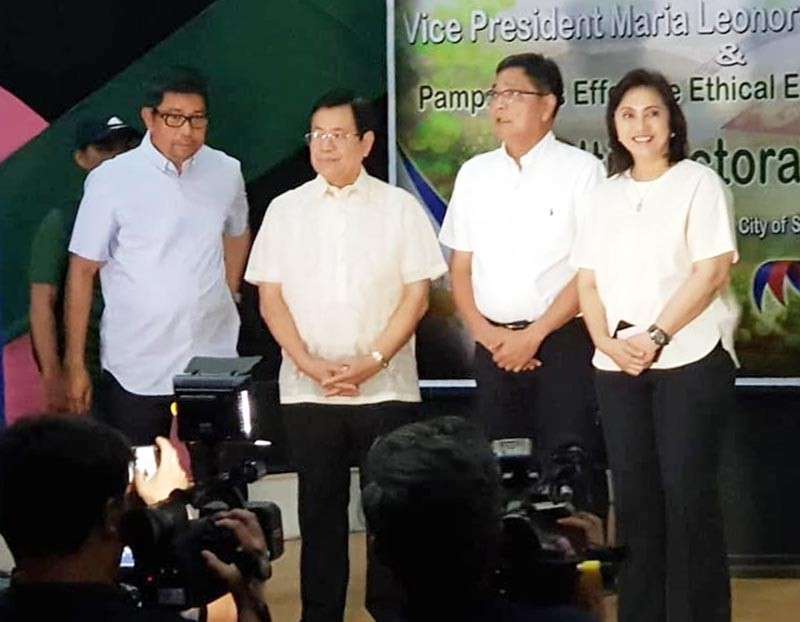 DESPITE the endorsement of House Speaker Gloria Macapagal-Arroyo and Governor Lilia Pineda on the Hugpong ng Pagbabago (HNP) candidates to Kapampangan voters recently, Vice President Leni Robredo said she is still optimistic of the support of Kapampangans for the “Otso Diretso” Liberal Party (LP) senatorial slate.

Robredo, who was in this capital city on Monday, February 18, for a multi-sectoral meeting and dialogue, also took the chance to formally endorse and seek Kapampangan’s support for the eight-member opposition-backed senatorial team.

While her visit is far from the HNP opening salvo where about 20,000 people attended, Robredo said it does not necessarily mean that the slate is not gaining the support of Kapampangan voters.

“I for one, do not focus on the number of attendees. What we saw over the years was that rallies are not measures because we know what happens in rallies. That is why I am hopeful, not because of me, not because of leaders, but what we offer which is unique,” she said.

She also expressed optimism that Kapampangan voters will look beyond popularity or “patronage politics” and would rather look at the credentials, work ethics and the advocacy of the candidates.

“I am hopeful that people will vote rightly. The good side of a candidate will be what people will look at and be their basis for voting,” Robredo added.

Robredo also downplayed the recent surveys where only two of their candidates - Aquino and Roxas - are included in Magic 12, saying she also started at one percent during her vice-presidential run in 2016, but was elected by the people during the elections.

“I am optimistic about the 2019 elections despite the results of the surveys, because there is still time. At this time, when I was a candidate, I was also at the bottom of surveys and nobody believed I had a chance at it. But because of perseverance and having sent the message across, people got to know me and this is what we hope to happen to our senatorial candidates,” she said.

Robredo also urged Kapampangan voters to not only exercise their right to vote, but maximize it by choosing wisely whom they will vote and elect in the coming May 2019 midterm polls.

“I always say during election season that everybody loves the poor that everybody is will to make sacrifices. But our plea to voters has always been, look at them when there was no election yet. What do they stand for without the campaign? That is the proper guide and measure if what they promise people would be fulfilled. It depends on where they are, with or without the elections,” she said.