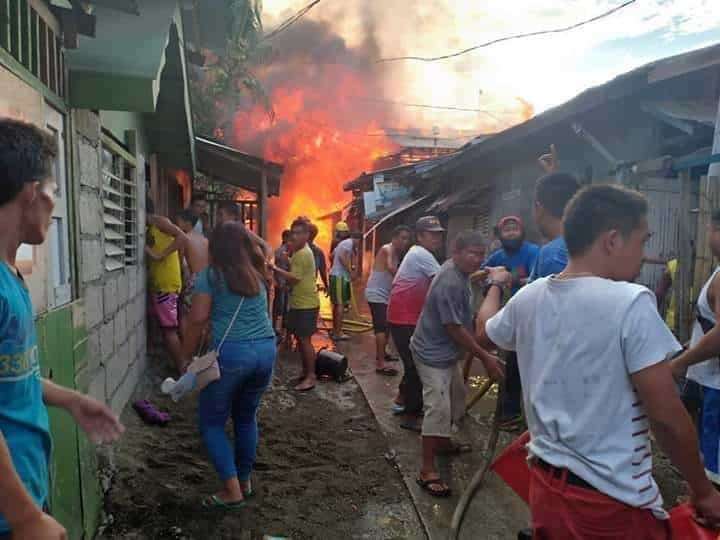 NEGROS. Residents help put out the fire which razed 43 houses in Barangay 6 in San Carlos City, Negros Occidental on Tuesday, February 19. A three-year-old boy reportedly went missing in the fire which started in an alleged drug den. (Dyesebel Barbecho)

THE fire which razed 43 houses in San Juan Baybay, Barangay 6, in San Carlos City, Negros Occidental on Tuesday, February 19, was initially caused by an unattended candle in an abandoned house used as an alleged drug den, a report from the Bureau of Fire Protection said.

Dela Cruz said the house was abandoned due to his arrest but it was reportedly used as a drug den by some individuals who hold “pot session” there.

However, she cannot tell if there were people inside the house when the fire broke out at 4:23 p.m.

The fire left 40 houses destroyed and three others damaged.

All the houses, which were made of light materials, were built in a mangrove area, Dela Cruz said.

Dela Cruz said they initially had difficulty in penetrating the area because it is a fire-depressed area, where informal settlers are situated.

The fire, which was put out after an hour, left an estimated P500,000 worth of damage.

A total of 47 families were affected in the coastal village.

The affected families were temporarily sheltered at the Regional Evacuation Center. They were provided assistance by the local government unit.

For his part, Superintendent D' Artagnan Katalbas Jr., city police chief, said they subjected Ybañez in a buy-bust operation in December last year after receiving reports about his illegal activities.

But after the anti-drug operation, they have not received reports that the house was used as an alleged drug den, he added.

It was just speculations because the house was already abandoned, Katalbas said.

The house was merely used as “tambayan” of street dwellers, he said.

The BFP has yet to issue a final report on the incident, he said.

“We will investigate reports from the barangay officials,” he added.

As this developed, Dela Cruz said a three-year-old boy reportedly went missing during the incident.

Authorities found remains at their house but they cannot yet tell if it was a human or a dog. It will be subjected for a DNA test.

Dela Cruz said the boy was sleeping while his 70-year-old grandmother was attending the house chores when the incident happened. His parents were not at home.

When the fire broke out, his grandmother took some of her belongings and locked the house, allegedly forgetting about her grandson.

As of 5 p.m. yesterday, February 19 the boy is still missing.

A total of 19 families were affected.

Based on the initial investigation of the BFP, the fire started from the second floor of the house owned by Lydia Dela Cruz.

The fire was put out after 30 minutes. No injuries were reported.