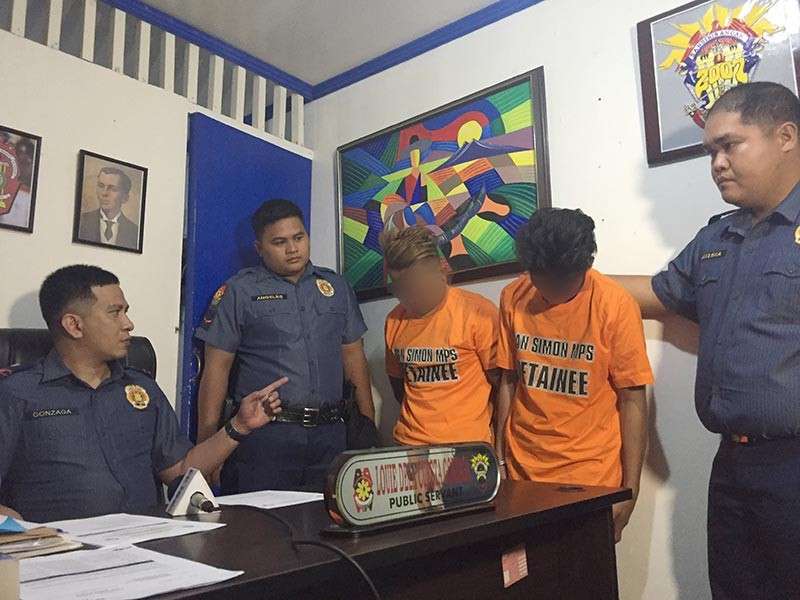 THREE employees of SG Farm Food and Processing Plant operating along Quezon Road in San Simon town were nabbed by local police after allegedly trying to steal 13 crates of dressed chickens from their workplace.

Chief Inspector Louie Gonzaga, this town’s chief of police, presented to media the three arrested suspects identified as Raymond Mabao, 27, August Alfaro, 34, and Ryan Benedict Aldiano, 19, while one Barton Zita was able to elude arrest and is still at large.

According to Gonzaga, the suspects were caught red-handed by company security guards loading the 13 crates containing 250 dressed chickens with an estimated value of P33,000 from the processing plant in a company van without authority from management.

When confronted, Gonzaga said that the suspects initially tried to escape but were collared by the security guards before they were properly turned over to local police.

“We have already received the same reports before but this is the only time that the suspects were identified and caught. We really suspect that the employees have been doing this for a long time now,” he said.

When asked, suspect Alfaro, who was employed as iceman for some two years in the company, admitted to the crime and expressed his regret, saying he was only forced to do it due to poverty.

Suspect Aldiano, meanwhile, denied his involvement in the crime and asserted that he was only included since he was the porter of the company van they used to steal the dressed chickens.

The four suspects are now charged with qualified theft with a suggested bail of P40,000 each. The arrested suspects are detained at this town’s police detention cell.