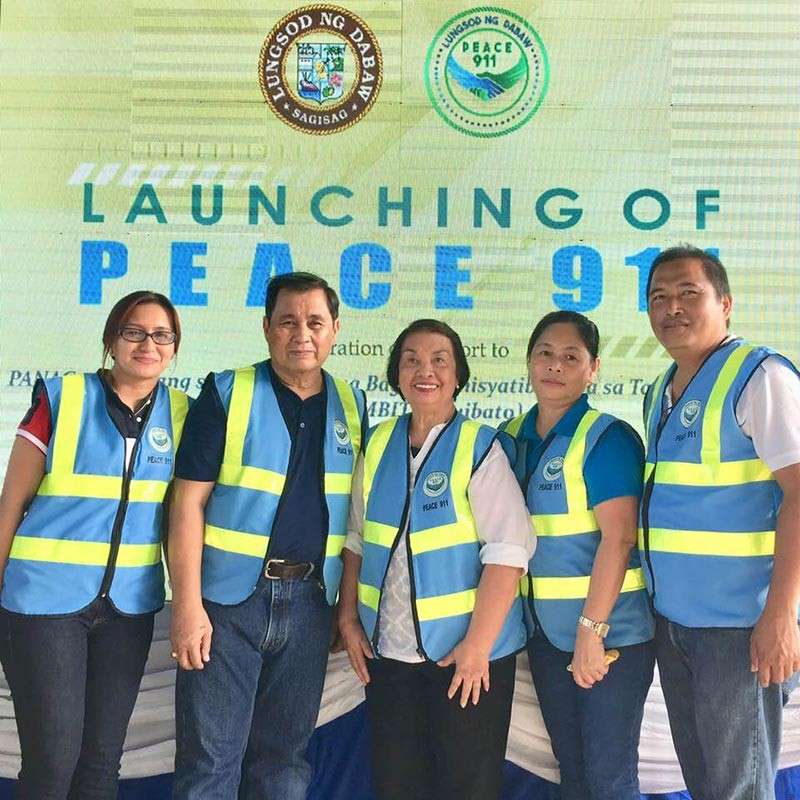 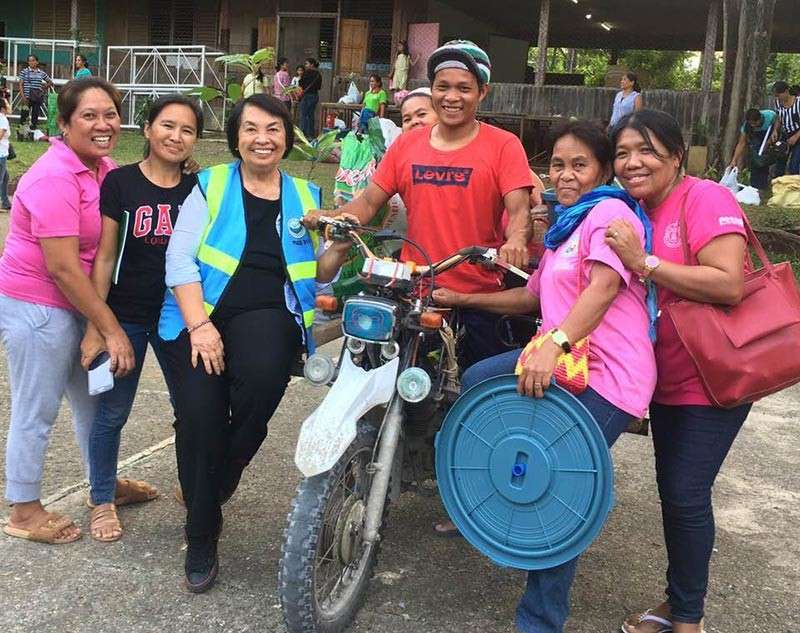 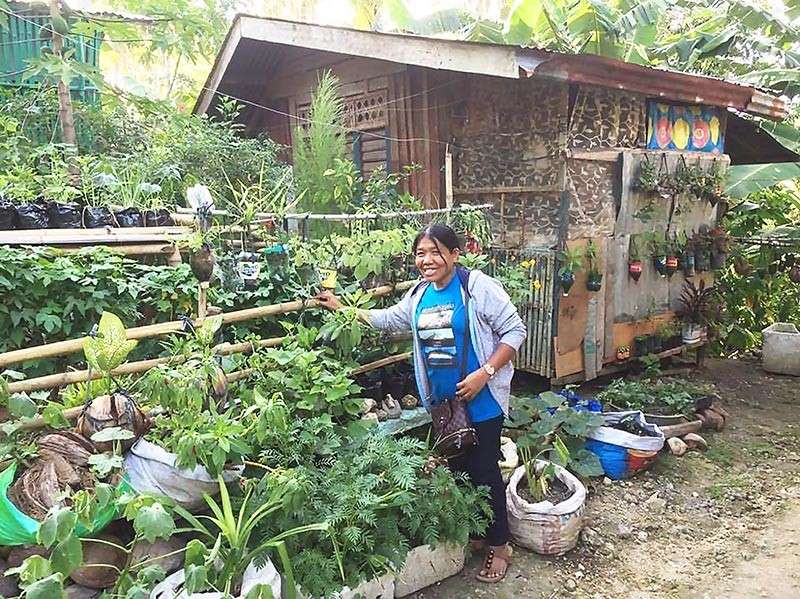 A woman leader in Paquibato proudly shows off her bahay-kubo that is teeming with vegetables, more than enough for the family. (Peace911 Photo) 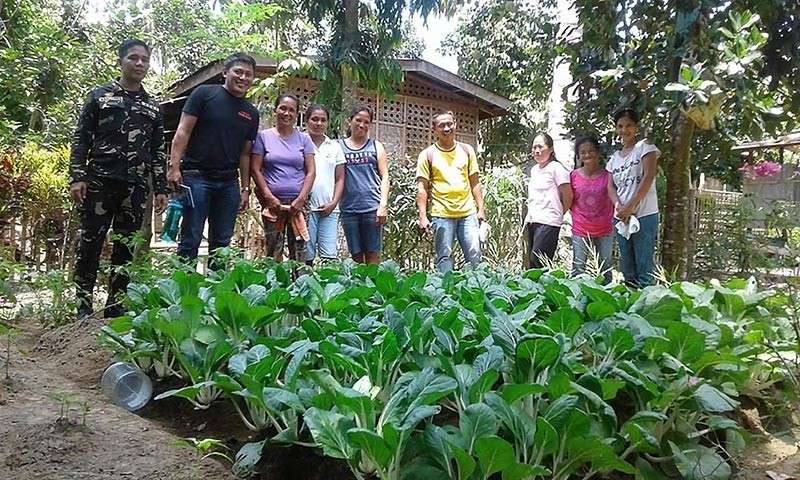 WHO would have thought that prevalence of gambling among poor rural folks is a matter of peace, or its absence?

This is the story of how menfolk of the 14 pilot barangays of Davao City’s Barangay Peace 911 (Peace911) program stopped gambling, whether last two numbers game or “sabong” (cockfight).

“Kay naa na mi kasiguruhan sa among kinabuhi, nawala na ang sugal og nag-uma na usab ang mga tawo (Because there is a sense of security in our lives, gambling disappeared and the people have returned to farming),” said Menchu Anonas, barangay councilor of Paradise Embac and president of the barangay’s women’s organization.

Originally conceptualized as a peace initiative of the City Government in the 13 barangays in Paquibato District, the last frontier of communist rebels in the city as it straddles the hinterland boundaries of Davao del Norte and the province of Bukidnon, it has since included Barangay Dominga in Calinan District because of proximity and similar strife.

Irene M. Santiago, the peace adviser to Davao City Mayor Sara Z. Duterte, said the change was first brought to her attention by a resident who rued the unavailability of men willing to accept daily construction jobs.

Santiago said that the reason given why men are no longer accepting daily labor is because they have returned to farming.

When they first arrived in Paquibato last year, Santiago said, gambling was prevalent. There were three last two draws and as many as ten cockfights a day. The men were taking on day wages doing anything and then gamble late in the afternoon till evening.

“It was a strategy for survival,” Santiago said. There was insecurity in their farmlands – they can be caught in a crossfire, can be accused of being a rebel, or they might have to abandon their farms even before harvest because of gun battles.

“So they did the short-term strategic plan for survival,” Santiago said.

With the sense of security stimulated by a functioning government through Peace911, people stopped gambling and returned to the fields. Had police action been taken like arrests and raids, the problem would have recurred because the cause was not addressed, she said.

Fear and hunger, the symptoms

“People think that when you bring in development there will be peace. Peace is not development and development is not peace. Development is the process of increasing capacities and decreasing vulnerabilities. So we can live long happy lives. The problem is deprivation, the problem is inequality,” Santiago said.

But addressing inequality right away will be difficult, thus, the first concerns addressed were the people’s fear and hunger. In Paquibato it has always been fear of both the military and the rebels and the fear about their future.

Fear and hunger are the symptoms of a disease. These have to be stopped.

“After that, you make sure the patient does not have a relapse,” Santiago said. This is where the trainings and capacity building mechanisms are put in place, depending on the identified needs and aspirations of the residents themselves.

In the boondocks, Rebel recruitment is easy because there is hunger, neglect, and fear. The military ranks high on the people’s fear list. Thus, the first action is to stop the abuses and make sure the soldiers are disciplined.

The 16th Infantry Battalion has stepped up to the challenge under Lieutenant Colonel Daren Comia and established a community relations program and well-disciplined soldiers who earned the trust and support of the residents.

Peace911 enjoyed credibility because the people saw that the military can be disciplined. Add this to the high trust rating of Mayor Duterte, then the people’s fears were addressed. Peace911’s head, lawyer Elisa Lapina has also proven to be cut out for the job as she is not just a hands-on leader, she is also adept at coordinating, networking, and working both with the masses and government agencies.

“One of the problems why there is violence and there is no peace is basically the government does not function and there is high level of corruption,” Santiago said. There was no functioning government in Paquibato when they first arrived, there was graft and corruption from the barangay level up to the city agencies tasked to oversee things there. All these were addressed by the mayor with firm resolve.

“The people realized Mayor Sara’s serious and that she’s gonna see this through,” she added. The mayor’s credibility is a major factor.

But key to the initial successes Peace911 is enjoying is its insistence that the Barangay Peace911 take the lead and everything is consulted with the people. It’s not your everyday government caravan that is popular among local government units that bring over government service only for a day or two. It is a program that the community leaders made up of the presidents of the women, youth, indigenous peoples, farmers, and faith-based groups and the barangay chairman plus one other barangay council member are heading and implementing and is introducing projects that respond to the identified needs of the barangay. It’s not a one size fits all template.

The key target in addressing hunger were the women and women organization because a child normally does not go to the father when hungry.

In a February 20, 2019 post by Rom on his Facebook account, he wrote: “when you wake up each morning seeing these veggies in the garden... makes u think that food security is the availability, accessibility and affordability to safe and nutritious food that food packing companies cannot provide.”

Through container gardens, womenfolk no longer need to farm with their husbands but are still able to provide the family’s daily needs and earn more from the surplus harvest at home. This arrangement fits into the gender roles of rural women. Because food is harvested at home, children are able to go to school with a full stomach and have lunch. Add this to the earnings the menfolk derive from farming, then hunger is addressed and there is no more need to take up arms.

As a result, all 15 barangays were declared clear of insurgents in nine months (five in December 2018 and the remaining 9 on February 14, 2019. The area clearing validation was presided over by Brigadier General Mario G. Lacurom of the 10th Infantry Division and chair of Area Clearing Validation Board.

Peace911 intends to expand to 15 more barangays in Toril and Calinan Districts in May 2019. Consultations are now ongoing in these barangays.

With hunger and fear already addressed, the next step is building “durable peace”.

Peace work through the decades has identified eight pillars of positive peace. The first two - a well-functioning government and low levels of corruption – were initially addressed in the work to assuage the people’s fear and hunger.

The other five are: acceptance of the rights of others – good relations with your neighbors, sound business environment, high levels of human capital where health and education is high, equitable distribution of resources, and free flow of information. The first two have to be sustained, and the rest needs to be set in place and then sustained.

“That is not thinking in projects because projects have a beginning and an end. Let us think in terms of building these pillars so that there will be no relapse,” Santiago said.

There is still a lot of work to do but the foundation has already been started and people can now look to the future with hope and confidence.