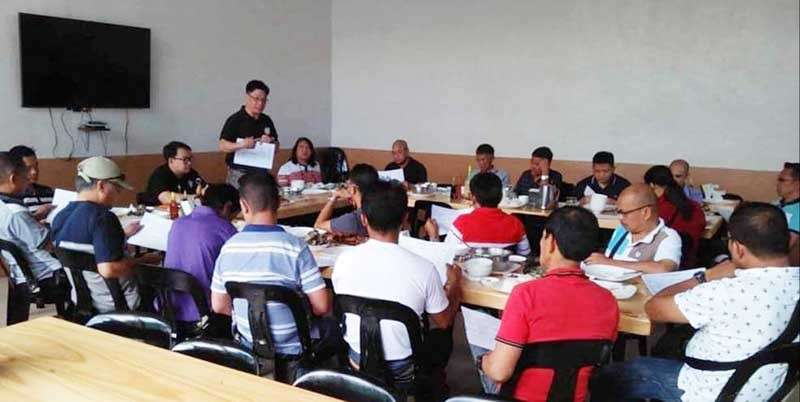 BACOLOD. Members of the National Congress of Unions in the Sugar Industry of the Philippines headed by their national president Roland de la Cruz (standing) with representatives of various workers’ unions during the launching of one million signature campaign against sugar industry liberalization at Nena’s Rose Restaurant in Bacolod City Saturday, February 23. (Teresa Ellera)

IN THE bid to protect the sugar industry stakeholders especially workers, a one million signature campaign against the proposed sugar import liberalization was launched in Bacolod City on Saturday, February 23.

National Congress of Unions in the Sugar Industry of the Philippines (Nacusip) national president Roland de la Cruz, who led the launching at Nena's Rose Restaurant, said they initiated the campaign along with the representatives of various workers’ unions in Negros coming from the sugar industry as well as hotel, beverage, and transport sectors.

De la Cruz said these groups believed that Negrenses will be affected by the sugar import deregulation, which is the way of the administration’s economic managers to address the high prices of sugar in the market.

“We will gather the signatures nationwide within three months and submit it to the President along with our open letter,” he said, stressing that “we are strongly opposing the sugar liberalization.”

This is a call and appeal from the workers, citizens, and families who are dependent on sugar industry, the Nacusip official added.

Under the deregulated sugar importation, the entry of imported cheaper sugar from abroad will destroy the local sugar industry “as well as the economy and the future of our children and the welfare of all the citizens of this province and of the whole country.”

Nacusip said it represents the workers and the citizens, both directly and indirectly dependent on the industry.

These citizens refer to those who are working in the sugar mills and farms, and to those families vulnerable to the possible adverse effects of the proposed measure.

The deregulated sugar importation scheme is seen to cause closure of sugar mills and massive dislocation and retrenchment of workers and farmers.

“What will happen to our families Mr. President?” the workers in the open letter asked, adding that “we now call on our government to junk and totally discard the proposal to liberalize sugar importation.”

It added that “let us protect the agriculture sector, let us support the sugar industry.”

De la Cruz said the threat is real in the sugar industry because it is already felt with the rice tariffication law.

As early as 2018, Nacusip already made a move to convince the President not to push through the sugar import liberalization plan, its leader said.

“In fact we already have written to Malacañang addressed to then Special Assistant to the President Bong Go. We are happy that during the passage of rice tariffication law, sugar was not included,” de la Cruz said.

“We, the workers, also do our share and this is not influenced by any planters or millers association. This is an independent initiative,” he said.

The labor leader said “our move is not only for the sugar planters but for the whole Negrenses as this is our industry.”

The group further supported claims that import liberalization is not the solution to the high prices of sugar in the market.

From the millgate price of P1,500 per sack, it is already pegged at P50 per kilogram when it reaches the grocery stores. “So where is the problem? It's from the millgate to the market.”

De la Cruz said the sugar workers, the sugar industry in general, has been struggling for its own survival.

The proposed policy will lead to the removal of the mandate of the Sugar Regulatory Administration thus, “we have to move not only now but for the future generation.”

“This is about Negros. The sugar industry is not just about the industry itself but this is about our own way of life here in the island,” he added.