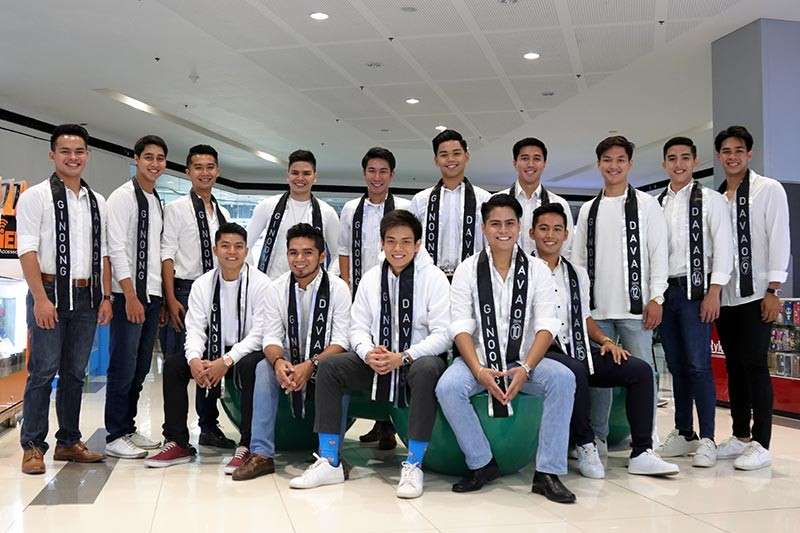 DAVAO. The 15 finalists for the Ginoong Davao 2019 pose after their media presentation Monday, February 25, 2019, during the Kapehan sa Dabaw at SM City Davao. Grand finals will be held at the Davao City Recreation Center formerly Almendras Gym at Quimpo Boulevard on March 3. (Mark Perandos)

THE top 15 of the first Ginoong Davao bared their advocacies that are geared towards helping the communities they are in.

The Ginoong Davao 2019 official 15 candidates were presented to the public Monday, February 25 at SM City Davao.

March Kyle Joshua Corbeta, a doctor, said in an interview with SunStar Davao that his advocacy is immunization of children from diseases like measles.

He shared his field rotation experience in the pediatrics department of the Southern Philippines Medical Center and he observed an increasing case of measles in other parts of the country.

“Measles is very preventable and we cannot deny a lot of children are dying because of this and I want na with Ginoong Davao I could somehow influence and with the use of my profession and I can talk to parents and reach out to people,” he said.

John Paul Navales, a sales associate, said his advocacy is on sports.

“Hopefully if madaog or dili man madaog if naay opportunity, i-push through gyud nako akoang advocacy kay gusto nako makita sa uban ang importance sa sports (If there’s an opportunity I would like to pursue my advocacy because I want to show to the people the importance of sports)”, he said.

Navales is also urging the people to be active in recreational activities such as sports instead of using drugs or other vices.

For his part, Paul Adriel Loquias, senior high school teacher, said he is pushing for education, environment protection and ecotourism.

“If given the chance, I will create a foundation that will actually give allowances for the identified poor students who would really want to go to school and learn and finish their studies,” Loquias said.

He added that these scholars will also be instruments for environmental activities such as mangrove planting, coastal cleanup, and creation and installation of artificial coral reefs.

Loquias said these students can also form a network to urge tourists in Davao to promote ecotourism.

“They can visit Davao, yes, we accommodate, we are hospitable enough but they have to respect every destination they will visit para sustainable naman ating tourism,” he said.

Meanwhile, Ginoong Davao event organizer Gatchi Gatchalian said in an interview with Sunstar Davao yesterday that the contestants are undergoing training since their screening day on February 21 for the grand finals.

“They’ll be representing Davao City, that is why they have to be prepared, so public speaking and these kind of workshops are very important,”he added.

Gatchalian said Dabawenyos should really look forward to the first Ginoong Davao because this is the search for the role model that their fellow Dabawenyos can look up to.

The Ginoong Davao Talent Night will be on Wednesday, February 27, at the Abreeza Mall while the coronation night will be on Sunday, March 3 at the Davao City Recreation Center formerly Almendras Gym.