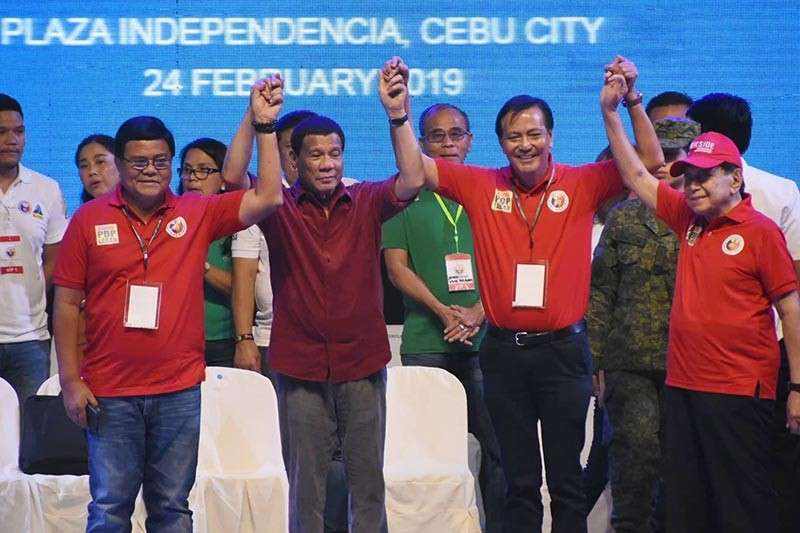 PRESIDENTIAL ENDORSEMENT. President Rodrigo Duterte raises the hands of Cebu City mayoral tandem Edgardo Labella (left) and Michael Rama (right) during the PDP rally at Plaza Independencia on Sunday, Feb. 24. What does this mean for Rama who has been named by the President as a narco-politician? See who else got the President’s endorsement on pages 6-7. (SunStar photo / Allan Cuizon)

IN WHAT may be a tacit endorsement, President Rodrigo Duterte raised the hand of former mayor Michael Rama, whom he had publicly named a drug protector, at a PDP rally in Cebu City on Sunday, Feb. 24.

Duterte also explicitly told the huge crowd at the PDP rally at Plaza Independencia that Rep.Gwen Garcia was his choice for gubernatorial candidate in the May 13 elections.

Meanwhile, Rama described the moment Duterte raised his hand at the rally as akin to “(being) in Cloud 9.” The Duterte-Rama moment was captured by photographers, and that of Duterte-Garcia.

Together with Rama’s, Duterte raised the hand of Vice Mayor Edgardo Labella.

Interviewed by Superbalita Cebu the day after the rally, Rama said he and the President spoke “for a few seconds” before the public display of political support.

Rama said he felt relieved when the President did it “because that would already manifest without having the President say anything.” In 2016, Duterte publicly named Rama, “despite their being friends,” as among those in the list of politicians who were involved in the illegal drug trade and that Rama provided drug lords with protection.

Rama has denied the accusation and had gone to see the President directly and through channels to clear his name.

Labella, for his part, said he was glad to get the President’s trust in him and his party mates in the Barug-PDP Laban.

He thanked Duterte for the endorsement and said he will do his best to rise to the President’s expectation to fight corruption, illegal drugs and crime.

Mayor Tomas Osmeña’s reaction? “Drug protector Imok (Rupinta) is cheering in his grave.” Osmeña, who will face Labella for the mayorship, has labeled the Labella-Rama slate as “Team Suyop” in reference to the allegation of Rama being a drug user and a drug protector. Rupinta, erstwhile barangay captain of the drug-infested Ermita, was fatally ambushed on Nov. 23, 2017.

She pointed out that Cebu gave the highest majority vote for Duterte in the 2016 presidential elections.

She said it’s common knowledge that Duterte is popular in the country, more so in Cebu. “Walay laing nakahatag og 14 million votes nga mayoriya.” In 2016, Garcia was running for a second term in Congress after three gubernatorial terms. In Cebu, she was the first to declare her support for Duterte, aligning her local party One Cebu with PDP-Laban, Duterte’s party.

Based on the 2016 election results in the Visayas, Duterte swept the votes in Cebu, Bohol, Southern Leyte, Leyte and Biliran. The other 11 provinces went to Mar Roxas.

Garcia said the President made it clear during the Feb. 24 PDP rally that he is supporting her in Cebu and that she knows the Cebuanos will let that sink in.

Duterte’s raising her hand was “a turning point” in her candidacy now.

Vice Gov. Agnes Magpale, who is facing Garcia in the gubernatorial race, dismissed Duterte’s gesture as nothing but a “political exercise expected in any campaign.” “We expected it and true enough, PDP candidates were endorsed by the President,” she said in a statement released by the Provincial Information Office.

“Notwithstanding alliances formed in this midterm elections, we remain steadfast in support of President Duterte’s anti-graft and corruption/anti-drugs campaign. We trust that the President will strongly go against officials who stole people’s money and he will not spare anyone, not even his political allies,” Magpale said.