Bzzzzz: Mike may have to de-escalate emotion on endorsement; what does one call Tony Cuenco's hand-raising? 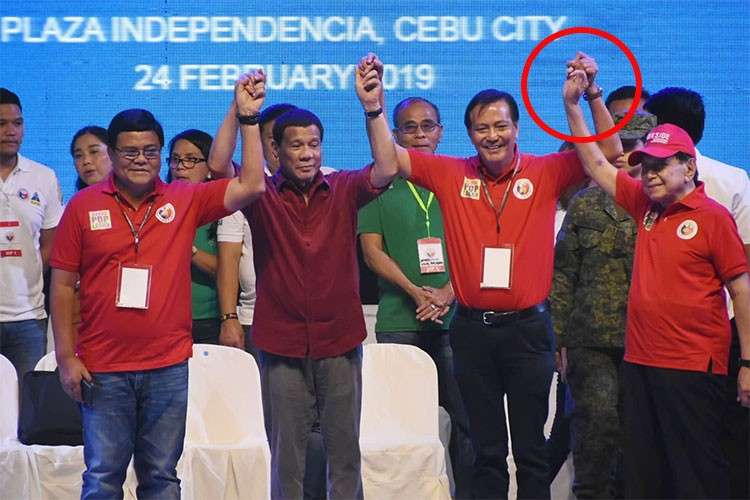 * Last December 2018, President Rodrigo Duterte wished death for bishops and priests whom he called "fools" and "useless." Since then, he had been publicly urging drug addicts and criminals "to maul, kill and steal from moneyed bishops." Then last Monday (February 25), he appealed to the public not to harm leaders of the Catholic Church. The turn-around coincided with, or was prompted by, the information that Manila Archbishop Cardinal Luis Antonio Tagle texted to Duterte that several bishops are now receiving death threats.

* MIKE'S HAPPY. Former Cebu City mayor Mike Rama, a major beneficiary of the endorsements of local candidates made by President Duterte at the PDP-Laban rally last Sunday (February 24), used a lot of adjectives to describe his feelings after he was included in the batch of endorsees. He said he was "exhilarated, giddily happy and glad" and was thankful to Duterte and Sto. Niño, among others (Mike lumped the saint with the president in the same breath). And, yes, he is on "Cloud Nine."

* 'RES IPSA LOQUITOR.' Mike said he'd no longer pursue his initial wish that Duterte expressly exonerate him of the verbal charge that he was a drug protector when he was mayor. The president's action, he said, was loud and clear enough. He told Jason Monteclar of dyCM radio that it was "res ipsa loquitor" (the thing speaks for itself) and "action speaks louder than words."

* A JINGGOY-BONG SITUATION? Wait, Mike may have to de-escalate his emotions, be a bit less happy, more cautious and maybe move down from Cloud Nine to, say, Cloud Seven. Presidential Spokesman Salvador Panelo has just been reported as saying that probably Duterte was just being courteous to Mike when he raised his hand in endorsement. Could be a Jinggoy Estrada-Bong Revilla situation. The two senatorial wannabes were endorsed, then later un-endorsed.

Mike may have to change emojis: from giddily happy to cautiously happy.

* 'MIKE DRUG TEST.' Would his political nemesis now stop calling Partido Barug, Mike and party standard bearer Edgar Labella "Team Suyop"? Maybe not. Propagandists usually don't drop a line that works even if they know it is a lie. Wags say Tomas has even expanded it: at a "pulong-pulong," the mayor made this "mike test" before speaking: "mike drug test, mike drug test." Apparently, Tomas still loves to rap Mike on the head even though the mayor's challenger is Vice Mayor Labella and Mike is competing with Councilor Mary Ann de los Santos for the vice mayor's seat.

May Duterte's endorsement of a candidate be extended, if not transferred, to another candidate?

Here's what happened: When the president was about to raise the hands of Labella and Rama, Barug candidate for councilor Tony Cuenco (the former multi-term congressman) sidled towards Mike who took Tony's hand and held it aloft too. Cuenco was thus included in the hand-raising ritual.

The photo must show Tony's hand being raised too, without however touching Duterte's hand. Was it an endorsement by extension? Cuenco may now claim he was endorsed by the president too.

Candidates who didn't get Duterte's endorsement had different spins, to minimize its impact on the campaign and to console themselves with. Their versions included:

* "Expected. Not surprising." Since President Duterte is the titular leader of PDP-Laban, he was expected to make the endorsements.

* "Protocol. Not his choice." Local party leaders decided on the choice of candidates and Duterte had nothing to do with the selection. By "protocol," he was duty-bound to express his support to the pre-selected candidates.

* "Duterte magic not transferable." Local voters know better the candidates for local positions. That is especially so when the candidates endorsed are "linked to drugs or corruption" - vices that Duterte has been battling against.