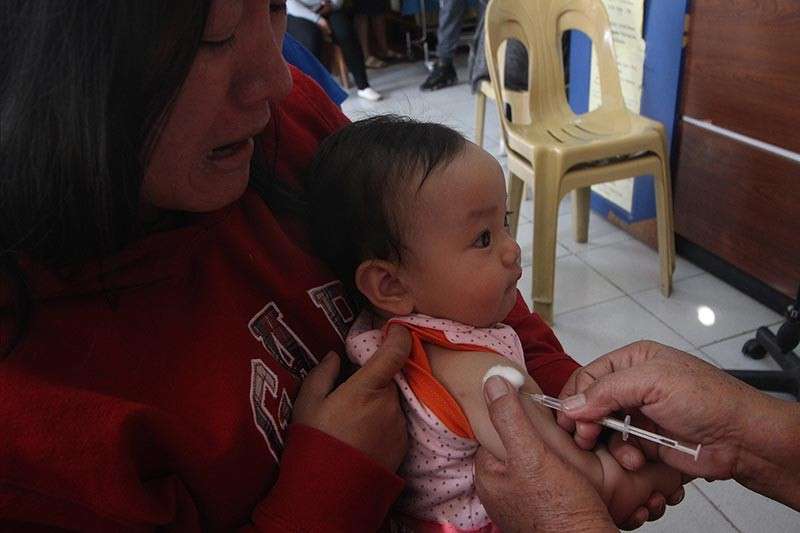 BENGUET. Ten-month-old baby Luna gets a shot of the Japanese Encephalitis vaccine at the municipal health center in La Trinidad. Babies at least 5months and not more than five years old are urged to be vaccinated to prevent being struck with the mosquito-transmitted disease. (Photo by Jean Nicole Cortes)

THE Department of Health Cordillera (DOH-CAR) recorded 65 confirmed cases of measles from January 1 to February 25 of this year.

Geeny Austria, nurse V of the Regional Epidemiology and Surveillance Unit (Resu), said aside from the 65 laboratory confirmed cases, 211 cases remain to be suspected measles cases.

“The laboratory confirmed cases which are spread out over the region; we are still awaiting for the results in the province Kalinga and Abra. We are intently monitoring this because one case of measles can infect around 20 persons in a crowded area.”

Measles is caused by a virus in the paramyxovirus family and can be passed through direct contact and through the air, and infects the respiratory tract.

Unvaccinated young children remain to be at high risk of the disease and its complications which include severe diarrhea, pneumonia, blindness, and even death.

Austria said “We are currently conducting a house to house immunization through hired nurses who encourages the conduct of immunization. In Baguio City, we started in the areas with laboratory confirmed cases.”

Based on data, age range of the infected is at 9 months old and below [20 percent] to the 25 year old’s and above [19 percent] with males having 112 cases while females at 99 cases.