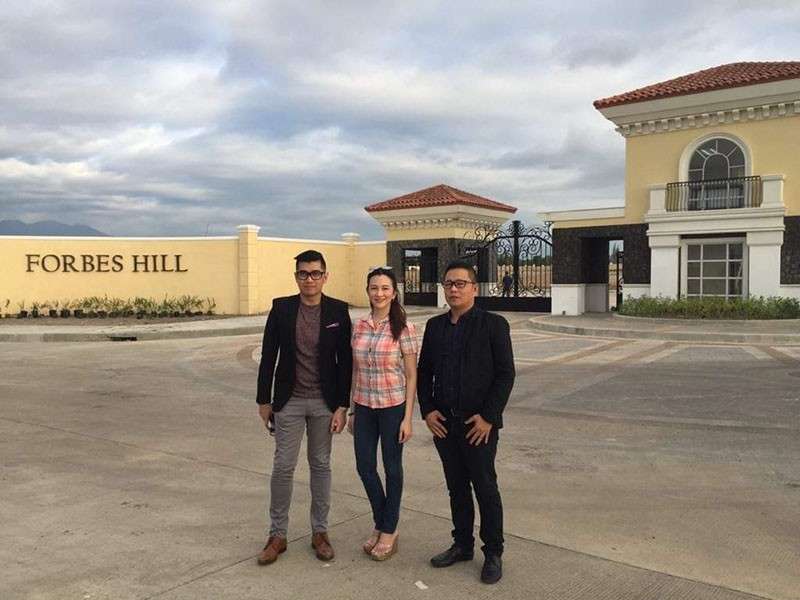 BACOLOD. Megaworld senior assistant vice president and head of public relations and media affairs Harold Brian Geronimo (from left), Megaworld–Bacolod vice president for sales and marketing Rachelle Peñaflorida and Construction Manager Glen Tejada during the media tour at the Forbes Hill at the Bacolod side of the firm’s Northill Gateway township along airport access road on Thursday, February 28. (Merlinda Pedrosa)

Megaworld senior assistant vice president and head of public relations and media affairs Harold Brian Geronimo, during the media tour in the site on Thursday, February 28, said they already completed the construction of the Forbes Hill’s Clubhouse.

The clubhouse sits on an almost a hectare of land within the exclusive Forbes Hill community.

Aside from the clubhouse, Megaworld also highlighted the completion of the giant fountain and garden fronting the village.

Geronimo said of 197 residential lots, which costs P20,000 per square meter, 70 percent were already sold. Most of the clients were locals and businessmen.

“Residents of the Forbes Hill are treated to a scenic view of the mountain ranges in Negros,” he said, adding that other features to watch out for include the blooming Philippine cherry blossoms and fire trees outside and inside the village, respectively.

Megaworld-Bacolod vice president for sales and marketing Rachelle Peñaflorida, who was also present at the tour, said they are excited to finally complete this phase of the project.

“We are also excited to welcome the future residents of Forbes Hill here. We take pride in offering opulence and exclusively to our elite of residents from this wonderful province,” she said.

Peñaflorida added that Forbes Hill is ideally suited for urbanites and families, around one-third of the entire village will be allocated for open and green spaces, and will also feature roads that are 12 to 20 meters wide.

Also, Forbes Hill will be having underground cabling system for power and utility lines, ensuring unobstructed views of the Negros Mountains and the surrounding provincial landscapes.

Just a short walking distance to Forbes Hill will be the North Hill Town Center, an expansive commercial retail development by Megaworld Lifestyle Malls. It will feature rows of cares, restaurants, retail shops and pasalubong centers, church, as well as leisure parks and event areas.

Connected to the North Hill Town Center is the Bacolod Welcome Park, which was unveiled last year, features a 7.2-meter Las Vegas inspired Welcome Marker. Beside it will be the soon-to-rise iconic McDonald’s, which will be the first along the airport access road.

Moreover, as the turnover of lots to the owner continues, the firm announced that it is building two model houses with modern-contemporary design in March this year.

“Within the next three years, you will see this new lifestyle district rising in this side of Bacolod, a perfect stopover especially to tourists and visitors coming to and from the airport,” Peñaflorida said.

Megaworld earlier announced that it is pouring in about P35 billion worth of investments to develop two township projects in the province.

The other project called The Upper East is 34-hectare mix-use development project is located on the eastern side of the city, near the government center, that used to be the Bacolod-Murcia Milling Company compound.

Poised to be the new and modern central and business district in the Negros Occidental capital city, the development of the project worth P28 billion has started last year.