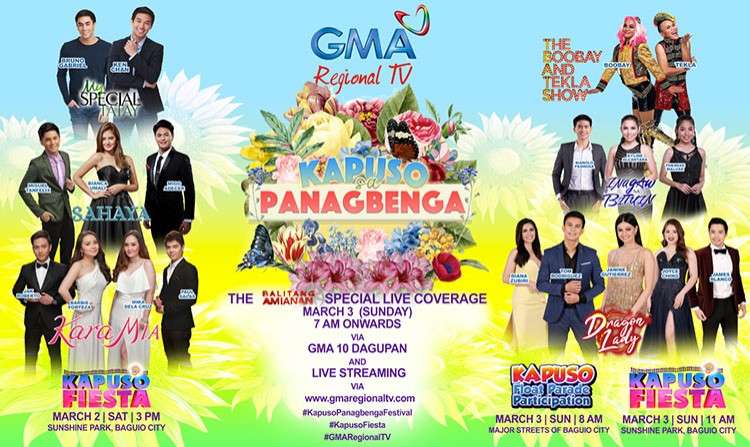 IT'S going to be a star-studded weekend in Baguio City as GMA Regional TV brings some of today’s hottest Kapuso stars to join in the celebration of the city’s colorful Panagbenga Festival.

On Saturday (March 2), the casts of Kara Mia, My Special Tatay, and Sahaya will be at Sunshine Park for a Kapuso Fiesta at 3 p.m.

Meanwhile, Ken Chan, lead actor of the top-rating afternoon drama series My Special Tatay, will treat his fans together with his co-star Bruno Gabriel.

Completing the powerful lineup on Saturday is one of the country’s hottest love teams -- Bianca Umali and Miguel Tanfelix -- who will soon be seen again on the small screen via the primetime drama series Sahaya. They will be joined by their co-star Migo Adecer.

On Sunday (March 3), bannering the Kapuso Float during the Panagbenga Float Parade are the stars from Dragon Lady, Inagaw na Bituin, and The Boobay and Tekla Show.

Two of the country’s sought-after and multi-talented actors, Janine Gutierrez and Tom Rodriguez of the upcoming fantasy series Dragon Lady, will board the Kapuso Float at 8 a.m.

Joining them as well are the lead stars of Inagaw na Bituin, Kyline Alcantara and Therese Malvar, together with their co-star Manolo Pedrosa.

Adding even more fun to the morning activity is the comedic duo of Boobay and Super Tekla of the hit comedy program aired every Sunday after KMJS, The Boobay and Tekla Show.

GMA North Central Luzon will have a live coverage of the Panagbenga Float Parade beginning at 7:30 a.m. Dubbed as the “Kapuso sa Panagbenga: The Balitang Amianan Special Live Coverage,” it will be hosted by Balitang Amianan’s CJ Torida, Joanne Ponsoy, and Jasmin Gabriel-Galban together with Balitang Amianan correspondents Russel Simorio, Kim Banderlipe and Ivy Hernando.

Later at 11 a.m., the stars of the three programs will have a Kapuso Fiesta at Sunshine Park.

“For this year’s Panagbenga Festival, it is with great pride that GMA Regional TV will be bringing not one, not two -- but six of GMA Network’s finest produced programs,” said GMA Regional TV Vice president and head Oliver Amoroso.

“We ourselves are thrilled to have the lead stars of these shows join us in a weekend of absolute fun and entertainment. It is only fitting to have them grace one of the country’s highly-anticipated festivals because we owe it to our loyal Kapuso viewers who put us in the number one spot. We can relate our Network’s success in the past years to the origin of the term Panagbenga, which means ‘season of blooming’ in Kankanaey -- we continue to ‘bloom’ nationwide, providing our loyal viewers with quality programs all year round. And this 2019, we can only expect the best from the best TV station in the country,” he said. (PR)