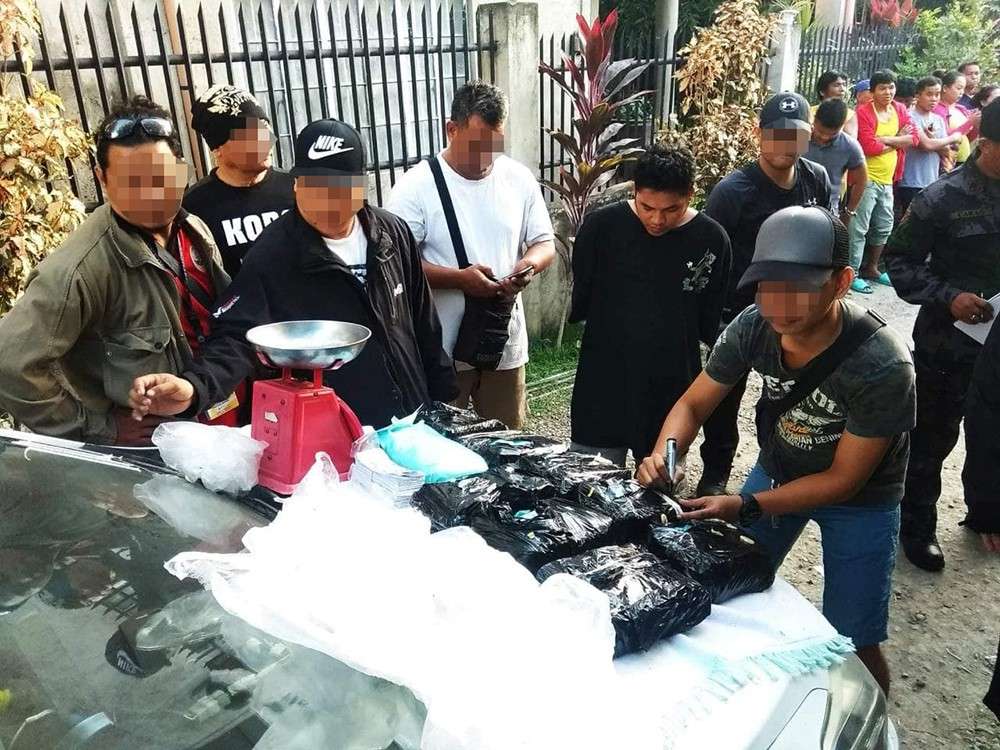 MAJOR HAUL. Some 18 kilos of shabu worth P122.4 million are seized from Elymar Ancajas (in black shirt) in Inayawan, Cebu City on Sunday, March 3. He points police to his source, resulting in the seizure of 10 more kilos of shabu worth P68 million. Police also arrest Jocelyn Encila and her parents. (Contributed foto / Cebu City Police Office)

TWENTY-EIGHT kilos of shabu worth P190 million were seized on separate occasions at dawn Sunday, March 3.

Police Regional Office (PRO)-Central Visayas Director Debold Sinas said the illegal drugs were not detected during transport from Muntinlupa to Cebu because crushed garlic cloves that were taped around the contraband masked their smell from drug-sniffing dogs.

Igot, according to the police official, is a convicted inmate at the New Bilibid Prisons in Muntinlupa City. He belongs to the Igot Drug Syndicate that distributes drugs in Metro Cebu and Cebu Province.

Arrested during the first operation in Barangay Inayawan, Cebu City was 31-year-old Elymar Ancajas. Seized from the suspect were 18 kilos of shabu worth P122,400,000.

Ancajas, who hails from Barangay Jugan, Consolacion, told operatives the source of the shabu was Jocelyn Encila, who also lived in the northern town in Barangay Casili.

Police conducted the transaction on the cellular phone because Jocelyn was in the hospital.

However, she instructed them to get the shabu from parents Marcial and Marilyn in their house in Casili.

When the couple handed 10 kilos of shabu with a street value of P68 million to the police, they were arrested. Seven others, including three children, were also brought to the Consolacion Police Station for questioning.

The children were later turned over to the Department of Social Welfare and Development 7.

Police also seized jewelry and undetermined amount of cash and three vehicles—a Toyota Fortuner and Grandia and a Nissan SR SUV--as these were believed to be “fruits of the crime.”

Jocelyn was later arrested in the hospital. She and the three other arrested suspects were brought to the police station for booking procedures and for the filing of appropriate charges in court.

Part of a bigger shipment

The shabu was taken to the Regional Crime Laboratory Office 7 to be examined. The vehicles were impounded at the Consolacion Police Station, as these will be subjected to a background check with the Land Transportation Office 7.

Both operations were witnessed by representatives from the media and the Department of Justice and barangay officials.

The PRO 7 will coordinate with the Anti-Money Laundering Council so the government can seize other properties of the four drug suspects.

Jocelyn also reportedly owns a condo unit in Cebu City and another house in an exclusive subdivision in Liloan.

“When the suspects started earning, they set up legitimate businesses. Then they went on a shopping spree,” Garma said in Tagalog.

Ancajas told police he was a legitimate construction materials supplier in Metro Cebu before he became a drug courier last December.

But Garma said Ancajas set up his business to hide the millions in shabu transactions he facilitated to supply the demand in Cebu City.

“These kilos of shabu were intended for Cebu City because demand (is) still high,” Garma said.

The distribution of the 40 kilos of shabu to different drug personalities under the drug syndicate was halted because of the death of one of their contacts, a certain Quazar Quianchon.

Quianchon was killed in a buy bust conducted by the Provincial Intelligence Branch in Talisay City last Jan. 30.

It was just recently that Igot gave the go-signal to distribute the shabu, police said.