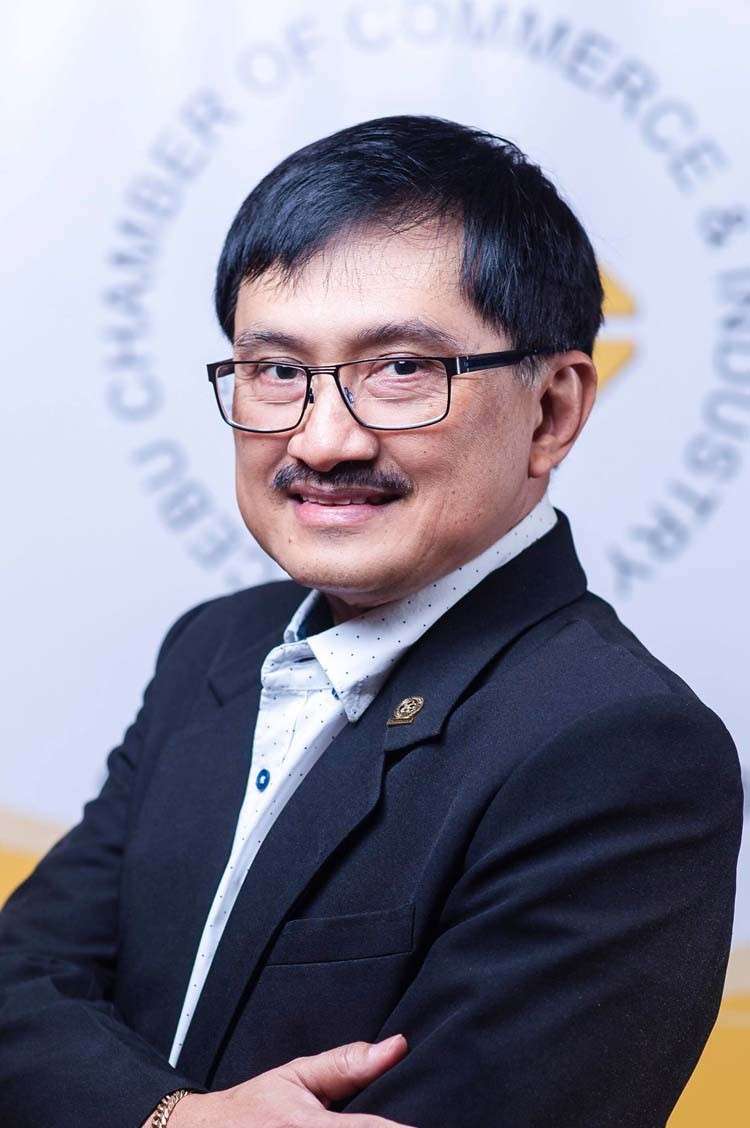 (Photo courtesy of Cebu Chamber of Commerce and Industry’s)

BUSINESS owner and consultant Virgilio “Nonoy” Espeleta is the newly-elected president of Cebu Chamber of Commerce and Industry (CCCI).

He is the of the 37th president of the 116-year-old business organization. He succeeded honorary consul of the Slovak Republic, Antonio Chiu, who served the chamber for a year.

Espeleta joined CCCI in 1993 when he was the plant manager of La Tondeña Distillers Inc. during the presidency of Efren Valiente.

Since then, he became active in various chamber activities.

Espeleta is the founder of Famcor Franchise Management and Executive Development, where he is presently engaged in hand-holding mid-sized, mostly family–run enterprises achieve their highest growth potential by crafting and implementing sustainable and strategic business roadmaps.

He also sits as independent director for various client–companies while providing direction to some business ventures he has equity shares in.

Prior to becoming CCCI’s president, Espeleta served as the chamber’s vice president for business development.

He took an active role in past years, helping the Department of Trade and Industry roll out its Kapatid Mentor Me (KMM) program, which was piloted in Cebu.

Espeleta helped craft the 12-module mentorship program of the trade agency that spans a 10-week period of coaching micro, small and medium enterprises (MSMEs) in Cebu.

The Mentor Me program was first launched in October 2016, in partnership with Go Negosyo and the CCCI.

Espeleta volunteered to mentor these entrepreneurs and was responsible for the creation of the modules, which are now being adopted by the Mentor Me programs implemented in different parts of the country.

He also pursued a master’s degree in business management at the Asian Institute of Management as a full scholar of the Asian Development Bank. He is one of the few certified franchise executives in the country, accredited by the World Franchise Council.

He is also an adjunct professor of the Asian Institute of Management on special short courses for executives and entrepreneurs.

As chairman of the AIM-Alumni Association Cebu Chapter, Espeleta brought some AIM executive education courses to Cebu. He was awarded 2010’s Most Outstanding Alumnus of the University of San Carlos.

Joining Espeleta are the newly-elected officers and trustees.

Yuvallos was one of the three Filipino entrepreneurs appointed as members of the Association of Southeast Asian Nation—Business Advisory Council along with Teresita Sy-Coson of SM Investments Corp. and Manuel Pangilinan, chairman of the Philippine Long Distance Telephone Company, during the stint of former president Benigno Aquino III.

Francis Dy of Greenworld LED Solutions Inc. is the new board secretary while Allice Queblatin of Cebu Alliance of Tour Operations Specialists Inc. is his assistant. Wendell Ganhinhin of Punongbayan and Araullo is the new treasurer, with Jose Mari Cañizares of Cañizates The Architect as assistant treasurer.

Aldie Garcia of Isla Lipana and Co. and Bunny Pages of Pages Holdings Inc. will represent the service sector in the board, while Robert Go of the Philippine Retailers Association-Cebu Chapter was named sectoral representative. Michael Cubos of Performance 360 Global Services will represent the ICT sector.

CCCI members voted on the officers and trustees during the organization’s last general membership meeting on Feb. 21.