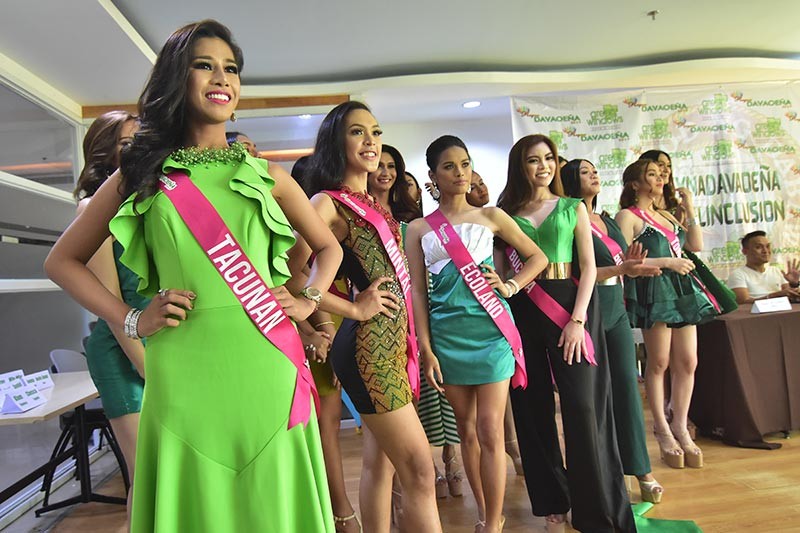 REYNA Davaoeña, the first pageant for transgender women in Davao City, seeks to promote social inclusion during the celebration of the 82nd Araw ng Dabaw to allow the LGBT community to take part in the festivity.

A total of 30 candidates presented their advocacy where most of them wanted to push for the strengthening of anti-discrimination ordinance and acceptance of their sexual preference.

“Officially, one of our hashtags is social inclusion, which is one of our major project ng LGBT community because ang isang aim namin is to be included in our society,” Emmanuel Babao, organizer of the event, said during the press presentation of the candidates at Green Windows Hotel on Monday, March 4.

Reyna Matina Desiree T. Ursos, who has been a victim of discrimination, wants to raise awareness on the negative impact of the social stigma on the LGBTQ community especially among the younger LGBTQ who suffered from bullying in schools.

”My advocacy is inclusive education through imposing anti-discrimination and anti-bullying act. I believe, school should be a safe place for everyone but often, the LGBT individuals often find their school activity that is full of discrimination and bullying. These abuses can curtail or limit their access to quality education,” Ursos said.

On the other hand, Reyna Toril Anne Fernandez is advocating for passage of the Sexual Orientation and Gender Identity and Expression (Sogie) bill.

“I support Sogie bill because as a vessel of the LGBTQ community, I want to push for democratic spaces because the stigma of LGBTQ that we are facing everyday is very hard, there is this public toilet, job employment equality and to be legally part of the community,” Fernandez said.

As a nurse by profession, Reyna Agdao Kendall M. Valdez said that should she win the crown as the first Reyna Davaoeña, she will raise awareness on the importance of getting tested for human immunodeficiency virus (HIV).

“As a healthcare provider, I’ve been advocating this for two years already and I am really pulled towards the cause because I have a friend who is affected with this (HIV). We all know that Davao City ranked sixth in HIV victims; so we must take an action and hashtag Break The Stigma campaign. We have to break the stigma, we have to respect those victims of HIV,” Valdez said.

She also sees this as a platform to inform people that Aids-HIV is not only prevalent among the gays but may be contracted by other people of different backgrounds.

“We should encourage them to get tested. With this advocacy, this will help me promote Davao City as one of the cities that is promoting a healthy lifestyle,” she added.

Sponsored by the City Mayor's Office (CMO), the event is said to be as prestigious as the Mutya ng Davao pageant. The grand winner will take home a cash prize of P200,000 during the coronation night set on March 8, 2019 at the Davao City Recreation Center.

The runner-up will receive P150,000 while the third placer will get P100,000. Consolation prizes will also be given to non-winners.